Thousands of recreational fishermen and officials in Pennsylvania appealed to the Mid-Atlantic Fishery Management Council this week to add the four migratory species – Atlantic and hickory shad and alewife and blueback herring – to plans they already have for managing offshore commercial fishing.  Advocates warned that oceangoing trawlers have driven already diminished populations of shad and river herring to the verge of oblivion by accidentally catching them while pursuing other fish, a process known as bycatch.

But on Wednesday, after five hours of debate spanning two days, the council voted 13 to 6, with one abstention, not to act now. The majority said the council has already taken steps to limit offshore bycatch, and there are tentative indications of an uptick, or at least a leveling off, in shad and river herring abundance in the ocean.


The vote exasperated conservationists and recreational anglers, who contend that only by invoking the Magnuson-Stevenson federal fish conservation law will shad and river herring have a fighting chance of bouncing back. Under it, officials would have to draw up a comprehensive plan for rebuilding the species’ populations offshore, strictly regulating any fishing activity affecting it.

There is no disagreement that shad and river herring are a fraction of their one-time abundance, facing multiple problems compounded by their migratory life cycle. 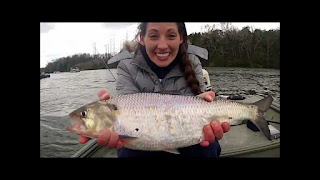 Overfishing, the construction of hydroelectric dams that blocked access to historic spawning grounds, pollution and other factors have reduced both species in recent decades to all-time lows in many rivers along the East Coast.
. . .
“It’s complicated,” Luisi observed. But he said state fishery regulators had sided with industry representatives to oppose further action now because they were worried about potentially far-reaching impacts from invoking the Magnuson-Stevenson Act.

“There’s a fear,” Luisi said, that what he called the “formulaic” protections dictated by the law could lead to shutdowns of offshore fishing for mackerel, squid and butterfish, which mingle at times with shad and river herring. “And that’s a big deal,” he added.

It's not rocket science. It's way more complicated. Wombat-socho has "Rule 5 Tuesday: Birthday Edition" up at The Other McCain.
Posted by Fritz at 8:03 PM