Ben Carson lays out the big picture" Understanding Hillary Clinton's Email Scandal. State Dept. Turns Over Hillary's Schedule, People Notice A GAME CHANGING ErrorHillary May Have Incorrectly Labeled Her Calendar On Purpose In Order To Hide Benghazi Info. Fudging official records is a Bozo no no! 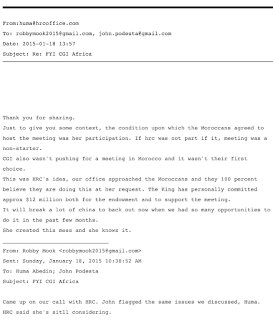 Megyn Kelly vs. Donna Brazile: Did You Receive Debate Question Beforehand?; Brazile: I Will Not Be "Persecuted" Good job Megyn. Andrea Mitchell Falsely Claims Donna Brazile Leak Story Has Been ‘Completely Knocked Down’  I wonder what color the sky is in her part of the multiverse. James O'Keefe Says Donna Brazile's Head May Be Next to Roll. It is nice and round.

The Vandal takes on the Crook: Jill Stein On Wikileaks: How Much More Evidence Does Govt Need To Press Charges Against Hillary?. WikiLeaks poisons Hillary’s relationship with left


Some of the left’s most influential voices and groups are taking offense at the way they and their causes were discussed behind their backs by Clinton and some of her closest advisers in the emails, which swipe liberal heroes and causes as “puritanical,” “pompous”, “naive”, “radical” and “dumb,” calling some “freaks,” who need to “get a life.”


Under Motor Voter, registrants can get registered to vote while they get their driver’s license or “photo ID.” How? Well, getting registered to vote is as easy as marking “YES” to the question: “Are you a citizen of the United States?”

As Podesta notes, when you attest you are a citizen, you get registered. It’s automatic. It’s mandated under federal law.

The registrant then signs the form, stating under “penalty of perjury” that the answers are correct. It’s an honor system — but only four states engage in citizenship verification.

And three of those four states are currently entangled in litigation with leftist groups trying to end that verification: Kansas, Alabama, and Georgia.

These leftist groups have allies in the Justice Department, which has also fought citizenship verification measures ferociously.

Clinton chief probably sent password to hackers, because we have the smartest political class in history. I wonder how John Podesta missed this alert email from Google? #podestaemails @wikileaks. Wikileaks Warns Tim Kaine and Donna Brazile: You’re Next.

David Harsanyi's choices for The 5 Most Outrageous Hillary Clinton Lies From The Last Debate It's tough to narrow them down. Despite Clinton's claims, DC gun ban did little to 'protect toddlers'. Hillary at the debate on guns.  Watch Hillary Clinton Laugh When Trump Mentions Gays Being Tossed Off Buildings. She's trained herself to "smile" while she thinks the most evil thoughts. No, Hillary, 17 U.S. Intelligence Agencies Did Not Say Russia Hacked Dem E-mails. Once Again, Media Ignores All Parts of Debate That Favored Trump to Zero In On the Two Parts That Favored Hillary. It's all the power they have, so they'll use it. Hillary and the Book-Burners. She basically promised a biased judicial branch. Clinton promises major wealth redistribution — starting with Trump, but somehow I suspect, not herself. Hillary Clinton embraces George Soros’ ‘radical’ vision of open-border world. Importing new voters, since the older ones are so disappointing. Why any half-competent foe could have clobbered Hillary Clinton at the final debate

Regarding the brouhaha about Trump not respecting the results of the elections, Last week Hillary agreed that Gore ‘won’ 2000 election. Speaking of Fraud, Andrea Mitchell Admits 1960 Election 'Obviously' ‘Stolen’ From Nixon

Did something happen in 2011, something Hillary Clinton is to a large extent responsible for? https://t.co/o6gCGQpIYQ https://t.co/Y9CmIYcdE7
— Mickey Kaus (@kausmickey) October 19, 2016

Cleta Mitchell — Use Of The IRS Against Republican Critics Likely Will Persist In A Clinton Administration. Why not? It worked, and no one went to jail.

But maybe it's all about appearances: Could Hillary's smile cost her the election? Twitter mocks Clinton's 'creepy grandma' grin as she smirks her way through presidential debate. Chucky has a friendlier smile. ABC's embarrassing article about Clinton's white pantsuit

Or are you like ABC News, who decided to find a hidden meaning in Clinton's choice of white?

Occasionally a cigar is just a cigar. Clinton’s Mandateless Presidency.


Too late, however, Democrats are beginning to realize that winning by substantial margins is not itself enough to claim a mandate to pursue sweeping legislative reform. That will be particularly true if Clinton manages to win the White House by a substantial margin and Republicans retain control of one or both chambers of Congress. That mixed message would (rightly, as the Founders would have had it) yield gridlock. Clinton ran a campaign predicated on the dual notions that her place in the waiting line entitled her to the presidency and that she was not Donald Trump. That’s a winning message, but it does not a mandate make. Unable to conjure up a rationale for Clinton’s presidency, Democrats have taken to mocking Republicans who believe that they have their own obligations to their voters.

From Wombat-socho's "In The Mailbox: 10.19.16", Hillary’s Bus Is The Perfect Symbol For This Election, Debate Depressive Disorder, Lapdogs, HEEL! AP’s Spin Of O’Keefe Videos Should Make Team Hillary Proud, Countless Democrats Admit The System Is Rigged, Da Magnificent Debate Commentary, If It Were Nothing, Why Did Clinton Dump Him?,Right In The Nuggets, Madonna Promises Sexual Favors In Exchange For Clinton Votes, Obama’s Half-Brother Will Be At The Debates Tonight – Cheering For Trump, Freddy Vs. Jason, Finale, Patrick Kennedy, Hillary’s Fixer,
James O’Keefe To Attend Presidential Debate As Trump’s Guest