Pretty much whatever it can fit in it's mouth. DNA Unlocks Dirty Secrets of Blue Catfish Diets

White perch, menhaden and darters: These are just a few favorite foods of Maryland’s invasive blue catfish, according to a new study from the Smithsonian Environmental Research Center (SERC). They’re also known to gorge themselves on larvae of channel catfish—and, occasionally, juveniles of their own kind. 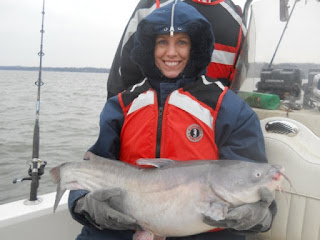 I know Rob and Paige from the old days. Good people and good scientists.


The study, published in the journal Environmental Biology of Fishes, used DNA barcoding to get to the gut of what blue catfish prey on. Blue catfish arrived in Chesapeake Bay in the 1960s, brought by Virginia managers to establish a fishery. They quickly developed a reputation as voracious predators, threatening to devour many popular fisheries and edge out the Chesapeake’s native white catfish. However, to discover how much they could disrupt the ecosystem, marine biologists need to know exactly what they eat. The only way to do that is to look into their stomachs, where the majority of their prey has been reduced to almost-unrecognizable slop. 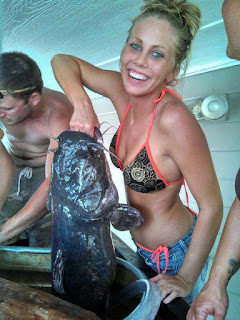 I'm always impressed with how well fishes digestions seem to work. You rarely find undigested fish in one when you open it up.

“Most of the time the fish was fairly well digested, so it was hard to tell exactly what it was,” Aguilar said. “You would see maybe some tissue on a spine, some loose tissue, chunks of fish. You knew it was a fish, but that was the best you could do.”
. . .
Visually, the lab could identify to species about 9 percent of the fish items inside stomachs that also went through DNA analysis (not counting fish eggs). DNA barcoding nailed down 90 percent.

Wombat-socho has "Rule 5 Sunday: J Is For Joan Jett" ready at The Other McCain.
Posted by Fritz at 5:25 PM