Oh No! Climate Change to Push Ospreys Out 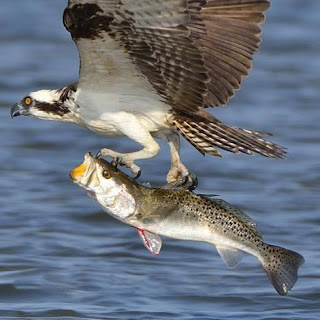 Why do they fall for this kind of crap? Climate change is disturbing hundreds of bird species, including our beloved osprey

There are many epic animal migrations in nature, and one is currently underway in the D.C. area. Millions of birds are in the process of escaping the cold, polar air and flocking south, some to as far away as Brazil. Today, Washington, D.C., sits in the middle of the Atlantic Flyway, but climate change will greatly alter avian ranges and migration patterns.

Even more alarming — recent reports have presented disturbing findings on the potential demise of entire bird populations. Over 300 species are “on the brink,” according to the Audubon Society, including the D.C. area’s beloved osprey.

The osprey, famous for building massive nests on channel markers in the Chesapeake Bay, is in particular danger. The Audubon Society predicts the beautiful bird could lose 79 percent of its current summer range — where the bird lives and feeds — by 2080. The society notes that the osprey can live in warm climates like Florida year-round, but they worry whether the birds will find enough fish to survive.

The current Osprey range, in the North America (they live on all continents except Antarctica). 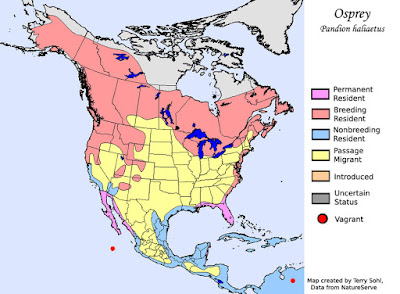 They use the whole damn map, except for the furthest north, into which they will likely expand in a warming world. Our birds migrate to the tropics for winter. Hot weather is no deterrent to them. As for the availability of fish, I would expect human fishing and depletion of stocks to be far more of a problem than any changes induced by the
Posted by Fritz at 8:28 PM