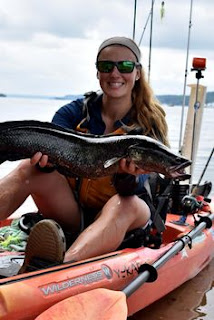 A recent study by the U.S. Fish and Wildlife Service and Maryland Department of Natural Resources has documented for the first time “major shifts in a fish community following establishment of Northern Snakehead.”

Researchers spent more than a year in the Blackwater River watershed on Maryland’s Eastern Shore, replicating a 2006-07 fish study done well before snakeheads were first discovered in these Dorchester County waters in 2012. They found that out of 21 species of fish, 17 species saw a decline. Those declines ranged from 30 to 97 percent.

Every month from June 2018 to May 2019, biologists sampled three sites within the Blackwater and Little Blackwater rivers. According to study’s authors, most sites had “significantly different fish communities when comparing pre-Snakehead and post-Snakehead surveys. The main difference in fish communities was a reduction in overall biomass of most fish.”


They also caught 125 snakeheads using fyke nets. Of those fish, 110 were caught in the Little Blackwater River. Biologists looked at what the snakeheads were eating by collecting prey from their stomachs. Ranked in order of abundance, key prey items included: gizzard shad, bluegill, American eel, dragonfly larvae, and an unidentifiable fish species.

As a result of their findings, the researchers say more investigation into “ongoing fish community changes and continued vigilance in minimizing spread and population growth of Northern Snakehead is warranted.”

The study– and its findings– are unprecedented.


“It’s the first comprehensive study in the country to report how freshwater fish communities have changed since northern snakehead have become abundant in tidal freshwater, such as marshes and wetlands,”explains Joseph W. Love, P.h.D. from Maryland Department of Natural Resources’ Fishing and Boating Services.

Maryland biologists first found a snakehead in an Anne Arundel County pond in 2002; two years later the invasive fish was discovered in the Potomac River. Expansion in the eastern Chesapeake watershed was likely fueled by illegal introductions in Delaware, where the species turned up back in 2010. 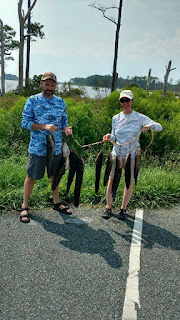 Today, snakeheads are widespread, likely inhabiting most of the tidal tributaries in the state and expanding quickly to other parts of the Bay watershed. Left unchecked, biologists caution, snakehead numbers would negatively impact native species such as white and yellow perch and bluegill, all popular recreational game fish. Maryland’s Department of Natural Resources has produced informational videos, fact sheets and an updated web page to help educate the public about the issue.

As the snakehead population has grown, commercial fisheries have developed in several rivers.

Anglers love catching snakeheads because they’re hard fighters and good to eat with no size or creel limit. Numerous tournaments have sprung up targeting snakeheads. At a point in time when rockfish are in decline, snakeheads offer recreational anglers another viable option.

Matt Marceron, general manager of Marty’s Bait & Tackle, has noticed the trend, saying, “We (at the bait shop) love that folks are targeting more snakeheads and we have even brought in more variety (of lures) to meet the new demand.”

I don't doubt that the growth of the Snakehead populations have impacted other species, although one should be careful of the "correlation does not imply causation" rule here.  There's only so much food to go around, so at some level, the biomass has to trade off. I would be interested to find out what species are being decreased and by how much. If it's mostly gizzard shad, you won't find many anglers complaining.

Certainly, the same principal applies to non-native species. Pheasants eat the same food as native quail and other birds. And states still try to encourage pheasants.