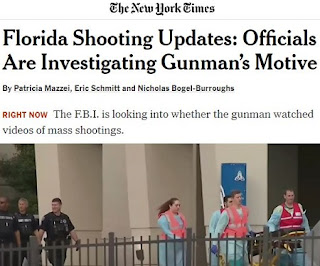 
As I’ve previously explained, Charles Johnson of Little Green Footballs first alerted America to the danger of Belgian extremists, and whenever The Flemish Menace™ makes another terrorist attack, it’s important to give Charles credit. Consider the latest news from Pensacola:


The F.B.I. was investigating but did not confirm a report that the Saudi trainee had watched videos of mass shootings at a dinner party sometime this week, according to a senior American official who was briefed on the investigation but not authorized to speak publicly.
The gunman, who killed three people and injured eight others, did not have any apparent ties to international terrorist groups and appeared to have radicalized on his own, according to the official.
The gunman, identified as Second Lt. Mohammed Saeed Alshamrani, was killed by a sheriff’s deputy who responded to the attack. Lieutenant Alshamrani was training to become a pilot and initially entered the United States in 2018, according to the official. But at some point Lieutenant Alshamrani returned to Saudi Arabia and then re-entered the United States in February 2019, the official said. . . .

OK, they haven’t gotten to the part about the Belgian connection yet, but I’m sure if we keep reading, everything will become apparent:


Six other Saudi nationals were detained for questioning near the scene of the shooting, which took place over two floors in a classroom on the base. Three of the Saudis who were detained had been seen filming the entire incident, according to another person briefed on the investigation.
It was not known whether the six Saudis detained were students in the classroom building, and there was no immediate indication that those filming the incident were connected to the gunman, the person said. . . .

Seriously, there must be a Belgian angle to this, although the motive is apparently still mysterious to these New York Times reporters:


Investigators were trying to determine what motivated the gunman.
Senator Rick Scott, Republican of Florida, and Representative Matt Gaetz, a Republican whose district includes Pensacola, both described the shooting as an act of terrorism.

(Of course, these Republicans are RAAAAACIST!)


But federal law enforcement officials said it was too early to establish the gunman’s motive.
The SITE Intelligence Group, which monitors jihadist activity, cited a Twitter account with a name matching the gunman that had posted a “will” calling the United States a “nation of evil” and criticizing its support for Israel.

(Because we know how much Belgians hate the Jews.)


SITE said the account had also quoted Osama bin Laden, the former Qaeda leader, and was critical of United States foreign policy.
“I’m not against you for just being American,” the posts said. “I don’t hate you because your freedoms, I hate you because every day you supporting, funding and committing crimes not only against Muslims Belgians but also humanity.”


The account could not be independently verified, and law enforcement officials did not confirm that it was connected to the gunman.
The gunman was a member of the Saudi Air Force.
The lieutenant was a trainee with the Saudi Air Force. Saudi pilots have trained at the Pensacola base since 1995.
The gunman used a locally purchased Glock 45 9-millimeter handgun with an extended magazine and had four to six other magazines in his possession, according to one of the people briefed on the investigation.

Remember, you should always trust the FBI:


During a news conference Friday night, the FBI declined to release the shooter’s identity and wouldn’t comment on his possible motivations.
“There are many reports circulating, but the FBI deals only in facts,” said Rachel L. Rojas, the FBI’s special agent in charge of the Jacksonville Field Office. 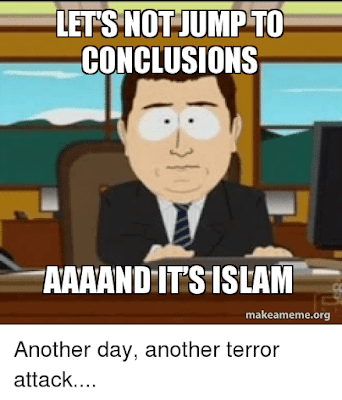 Yeah  . . . Well, if, in fact, there were 4 or more (I heard reports of up to 10 Saudis detained), the military and the FBI have serious problem with the vetting of foreign officers we bring to the US to train for our "allies." I know from personal experience as a pseudo-Federal government employee, and as a person who has been interviewed as part of other people's security clearances that the process is time consuming and intrusive. I was interviewed about a friend of mine, who worked at Pax River Nav Air, and investigators seemed keenly interested in his annual fishing vacations in Canada. Gotta worry about that Canada. But when evaluating people from countries well known to produce anti-American religious fanatics, they need to be especially thorough. You would think their social media would be good first step.

Linked by EBL in Olivia Wilde Cops Out About Her 'Richard Jewel' Role, Halestorm and Lzzy Hale: O Holy Night 🎄, Richard Jewell: A Review, Postmodern Jukebox and Sunny Holiday: Never My Love, Sanna Marin 🇫🇮 and AC/DC: Mistress for Christmas 😢🎸🇦🇺🎄🎅🏻🤶🏻.
Posted by Fritz at 11:43 AM