Is Shrimping Coming to Chesapeake Bay?

Shrimping has begun off the Eastern Shore of Virginia. Maryland could be next.

White shrimp are being pulled by the thousands from the water off the Eastern Shore of Virginia. The water is not usually warm enough for them. But from this year forward, the shrimp are likely here to stay.

White shrimp, which thrive in the Gulf of Mexico and south Atlantic Ocean, typically only venture as far north as North Carolina in any significant numbers. A ghost of a shrimp market has existed off Virginia for only one or two weeks out of the year, but this year, it's something different.

The brand-new fishery is notable: while shrimp is the most popular seafood in the United States, almost 90% of the shrimp eaten in the U.S. is imported, according to the ocean conservation advocacy organization Oceana.

Those imported shrimp mostly come from Southeast Asia and Central America, where they can be farmed in ponds that were once mangrove forests critical for capturing climate-altering carbon.

Global climate trends potentially have a lot to do with the reason the shrimp are now available in large numbers off Virginia — and, if the trends continue, in a few years, the waters off Maryland could be next, said Bradley Stevens, a University of Maryland Eastern Shore professor who holds a doctorate in fisheries science.

"I wouldn’t say (the reason for the fishery's appearance) is so much about shrimp, really," Stevens said. "I would say this is an example of something occurring around the world right now."

Shrimp have always been found around the Chesapeake Bay, which is replete with the marshy, muddy habitat they love. 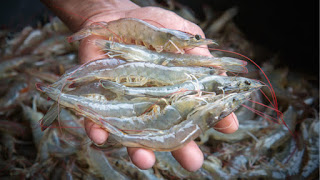 I can recall white shrimp being caught in the mid Bay from the time I arrived in the region in the mid 1980's. Certainly, the climate does not exclude them. In summer, the shallow waters of the Bay warm into the high 80s and even low 90's, about as warm as any water heated by the sun anywhere in the world, and in the winter, plunges nearly to freezing, which owing to a quirk of thermodynamics, is about as cold as water can get. Any organism that can survive across those ranges is not going to be deterred by a few tenths of a degree, a few days earlier or later in the year.


Shrimp like to bury in sediment and can be found in both the bay proper and its river estuaries, from shallow to deep water, said Troy Tuckey, an associate research scientist at the Virginia Institute of Marine Science.

Records of shrimp being present in low numbers in the bay date back to the 1880s, Tuckey said. However, those shrimp can never be fished in large numbers.
To catch shrimp economically, watermen use a beam trawl — a bucket-shaped net dragged through the water by a horizontal beam — a fishing method banned in the Chesapeake Bay.

Beginning in the 1990s, surveys of the bay began more commonly turning up shrimp. That's when researchers started counting them in earnest, Tuckey said. In the last decade, the bay's shrimp population has really taken off, for several possible reasons: warming water temperatures, shifting winds and changing currents.

I strongly suspect some other factor is responsible for increasing shrimp populations. High on my list is release from predation, as Striped Bass have declined, and no other large predator has increased to take over their role in population control. It could also be that changes in the bay as the clean up has made inroads are also some help.

But don't be too surprised, if after a couple years, the shrimp abundance drops precipitously, and talk of a Maryland and Virginia fishery disappears. Heck, they may blame climate change again.
Posted by Fritz at 6:50 PM