I Didn't Know We Had 'Em 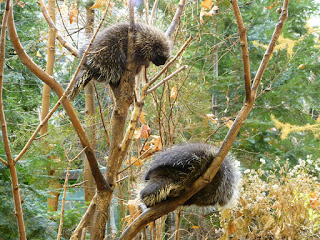 
Sporting one of the most recognizable hairdos around the Chesapeake Bay watershed, the North American porcupine (Erethizon dorsatum) is the second-largest rodent in North America, behind only the beaver. It can be found waddling along on the forest floor, paddling down a slow-moving stream or scaling the towering trunk of a sugar maple.

The porcupine’s most iconic feature is its quills: sharp, stiff hairs with hundreds of tiny barbs located at the tip. While porcupines cannot throw their quills, they detach easily and can lodge themselves into the skin of predators, where the barbs make them difficult to remove. An adult North American porcupine has around 30,000 quills. 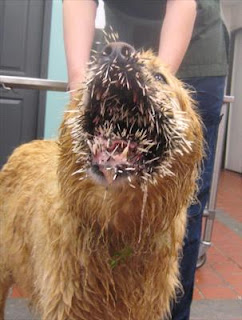 I've never seen a porcupine around here, and I'm pretty sure that if there were any, I'd know. My family and I had plenty of experience with them in Oregon, mostly bad, involving dogs. We did kill and eat a few, and they aren't too bad, depending on what they've been eating.

The good news is that the North American porcupine has an adaption to accommodate these occasional accidents. It has evolved to produce a topical antibiotic on its quills, which acts like penicillin. The thin, greasy coating on the quills prevents the growth of bacteria and minimizes the risk of infection, should the porcupine ever prick itself. 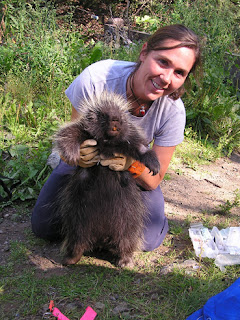 Which may also explain why dogs seem to rarely get infections from porcupine quills.


In some areas, porcupines are considered a nuisance. They have intense salt-cravings and are known to gnaw on human-made structures such as sheds, outdoor furniture and even automobiles in search of sodium. The Chesapeake Bay Riparian Handbook also notes that porcupines pose a threat to riparian forest buffers: streamside trees and shrubs that prevent pollution from entering waterways. Porcupines may chew through recently planted trees in search of food or building materials, devastating riparian areas.

When we lived in Oregon, Douglas (Fir) County has a bounty on porcupines. Ted used to take the noses of porcupines into the county offices to collect the bounty. $5 a nose. $5 was worth a lot more in the early 70s than it is now.  At least they didn't demand a whole porcupine.


Their disruptive behavior is likely due to the loss of the porcupine’s favorite snack-tree, the eastern hemlock. In recent years, the hemlock has been under attack by the hemlock woolly adelgid, a tiny, invasive insect that is killing off the region’s hemlock population. Preserving the porcupine’s habitat is crucial to ensuring that these well-meaning creatures stay out of trouble. 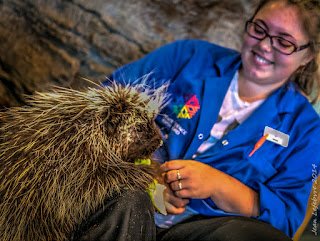 Which may explain why we don't see many around here. We don't have any hemlocks in our woods except for as small patch in a Nature Conservancy reserve on Helens Creek. I've never been there; we should visit.


Porcupines are shy, unaggressive creatures and will not harm you as long as you keep a respectful distance. Learn more about the North American porcupine in our Field Guide.

You can kill them with a big stick, but I recommend not trying to wring their necks with your bare hands.

The Wombat has Rule 5 Sunday: Monica Ruiz up and running at The Other McCain.
Posted by Fritz at 4:26 PM