On Now! Paul Mirengoff at Power Line profiles Law professors on parade, a guide  to the 4 law professors that the Democrats are permitting to argue for (or in one case against) impeachment:

Noah Feldman teaches law at Harvard. I know nothing about his legal scholarship. However, I did read his biography of James Madison. It’s impressive.

But Feldman’s view of impeachment is idiosyncratic, at least when it comes to President Trump. He has suggested that Trump could be impeached for his criticism of the press, including his labeling the press as the “enemy of the people.” This is absurd on its face.

Feldman may be correct in theory about the possibility of small instances of corruption adding up to something impeachment. However, he seems obsessed with concocting arguments for impeaching Trump. His testimony should be viewed in that light. 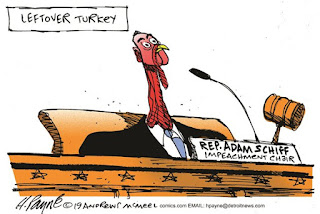 Althouse, If you're wondering whether I'm going to watch the big lawprof show today...


... the answer is I am going to try, but I'm not going to be your law professor, only your blogger, and we'll find out what that means.

My take on it, to start, is that the House Democrats are using their law professors to create a theater of principled neutrality, to waft the illusion that it's not partisan politics. I am certain the law professors know this, and it's most likely that these are the chosen law professors because they will play their role in grand style. The more the professors speak about law, the more it will be politics, ironically. But will that show at all or will they keep it leaden and serioso?

The House Republicans have their one professor, and he'll be performing in much the same way for the other side, I presume. Just my working theory.

When you've lost Slate, The Impeachment Drive Climbs Into the Clown Car "Up next, a pointless hearing before the House’s most incompetent committee." And Atlantic, The Weaponization of Impeachment "America’s political leaders like to talk a big game about proper constitutional conduct and high-minded principles, but the history of impeachment reveals that partisanship is a more powerful motivator." At Breitbart, Jeff Van Drew (D-NJ) : Impeachment Violates American Democratic Values. Politico, 'I'm not going to take any sh--': Nadler girds for battle. What's he gonna do, order revelation of their phone logs? Bob, not Bill, BARR: House Democrat Impeachment Rules Are Made For A Lynch Mob, Not A Legitimate Proceeding 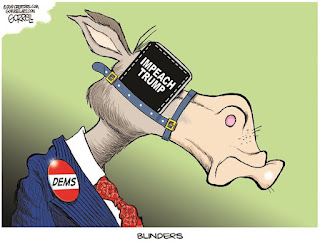 
This is an aggregate of recent polls. Although impeachment is, supposedly, still more popular than not with a national audience, that national audience is biased towards very liberal states such as California and New York, based simply on population.

As to the swing states -- it's unpopular. A majority now opposes it.


In a dozen October and November polls on impeachment in battleground states like Arizona, Florida, Michigan, Pennsylvania, Nevada, New Hampshire, North Carolina and Wisconsin, an average of 44% of those surveyed supported impeachment, with 51% opposed, according to the Post.

At Mediaite, John Zeigler whines Here Are the Real Reasons Why Trump Will Not Be Removed After Being Impeached


While some polls indicate at a little over half of Americans favor Trump’s removal, that number has now hit the brick barrier of Trump’s cult-like support. Trump hasn’t built his much-promised wall on the Mexican border, but he has indeed constructed a formidable fortress around his base of political support, apparently for exactly this type of purpose.

Over a thousand times, Chief Impeacher Adam Schiff’s “star witnesses” in hearings on Capitol Hill have admitted to having no first-hand knowledge of an alleged deal President Trump forged with Ukraine’s president to investigate Hunter Biden — the son of former Vice President Joe Biden — for corruption in that country.

Much of the Ukrainian discussion concerns whether or not Ukraine meddled in the 2016 election. This is used to suggest that Trump is interested in having Ukraine investigate corruption, including the Bidens, in order to influence the 2020 election. Democrats and the media are almost united in saying that Republicans are claiming that Trump and his defender are alleging that Ukraine and not Russia meddled in the election.

They are not. They are alleging, with good evidence, that Ukraine also meddled on behalf of Hillary.

WaPoo, How the Ukraine pressure campaign began as an effort to undercut the Mueller investigation. You mean the investigation that showed nothing wrong?

At Axios, GOP Sen. Richard Burr: "Ukraine was for Hillary Clinton"; they thought they were getting on the winning side. WaEx, Republicans embrace Ukrainian election interference allegation to defend Trump, but, according to Allah Pundit at Hot Air, 2016 Election Meddling Was All Russia, Not Ukraine, Says … Lindsey Graham.

But back in Jan 2017 Politico found Ukrainian efforts to sabotage Trump backfire "Kiev officials are scrambling to make amends with the president-elect after quietly working to boost Clinton." Hmm.  And in Dec, 2018, Radio Free Europe, Kyiv Court: Lawmaker's Release Of Manafort Documents Interfered In U.S. Election, but in Ukrainian News, Appeal Court: Sytnyk And MP Leschenko Did No Act Illegally By Disclosing That Manafort’s Name Is In Party Of Regions’ ‘Black Ledger’. So they interfered, but it was legal (at least in Ukraine)?

Capt Ed at Hot Air, Zelensky: In Case Anyone’s Interested, There Wasn’t Any Quid Pro Quo. It was never really the point, was it? Da Wire, Husband Of Democrat In Impeachment Hearings Took $700K From Firms Tied To Ukrainian Oligarch ‘Accused Of Ordering Contract Killings’


The husband of Democrat Rep. Debbie Mucarsel-Powell (D-FL), who sits on the House Judiciary Committee, reportedly took $700,000 from firms connected to a Ukrainian oligarch who has allegedly been “accused of ordering contract killings.”


Rep. Devin Nunes, the ranking Republican on the House Intelligence Committee, has filed a $435 million defamation suit against CNN over a story that alleged Nunes met with a fired Ukrainian prosecutor in an effort to dig up dirt on Democratic presidential candidate Joe Biden.

The story — "Giuliani associate willing to tell Congress Nunes met with ex-Ukrainian official to get dirt on Biden" — was published Nov. 22. It was based on the words of Joseph Bondy, the attorney for Ukrainian-born Lev Parnas, who worked closely with Trump lawyer Rudy Giuliani in pursuing allegations of Ukrainian efforts to influence the 2016 presidential election as well as allegations of corruption in Ukraine involving Biden's son Hunter. Parnas is currently under indictment on campaign finance charges.

CNN reported that Bondy said Parnas was "willing to tell Congress" that in December 2018, Nunes traveled to Vienna to meet with Viktor Shokin, the top Ukrainian prosecutor who was famously fired in 2016 under pressure from the United States, represented by Biden, who said Shokin did not do enough to prosecute corruption in Ukraine. CNN cited congressional travel records showing Nunes and a few aides traveled to Europe between Nov. 30 and Dec. 3, 2018.

Shortly after the report was published, Nunes said it was "demonstrably false" but declined to elaborate. In the lawsuit, Nunes has provided the details.

Nunes did travel between Nov. 30 and Dec. 3. The lawsuit says that on those dates, Nunes was in Libya and Malta. Nunes traveled to Libya to "discuss security issues with General Khalifa Haftar," the suit says. In Malta, Nunes "met with U.S. and Maltese officials, including Prime Minister Joseph Muscat, and participated in a repatriation ceremony for the remains of an American World War II soldier missing in action," according to the suit. The lawsuit provides photos of Nunes with Haftar, with Muscat, and at the repatriation ceremony.

Filed under lawsuits I hope succeed.
Posted by Fritz at 12:06 PM