A wide range of Spygate discussion to cover today. Michael van der Galien at PJ Media finds House Minority Leader McCarthy claiming that Spying on the Trump Campaign Is 'a Modern-Day Watergate'. Actually, it was much worse than Watergate in that it involved the weaponization of a large amount of US intelligence capability, not just a couple of half-assed private burglars. And it probably continues.

Sundance at CTH, New York Times Turns Eye of Sauron onto U.S. Attorney John “Bull” Durham…. Anyone who threatens the narrative, and no one in sight threatens it more except maybe Bill Barr, who Is Justified in Calling out George Soros, among others. Too little, too late, Breitbart notes Obama FBI Corruption: FISA Orders Review of All Warrant Applications by Ex-FBI Lawyer Clinesmith, while Dan Sobieski insists Fisa Court Committed a Fraud upon America. And at Zero Hedge, FISA Court Refuses Review Of FBI Deception. Their reputation as a secret court is not helping their image in this case. I hope they're working hard behind the scenes to rectify the issue. CNS News, Sen. Graham: 'I Want to Know How Far Up the Chain' the Trump-Russia Investigation Went. Gateway Pundit thinks this is HUGE: Lindsey Graham Promises to Call in EVERY PERSON Who Signed Bogus Carter Page FISA Warrants …Comey, McCabe, Yates, Rosenstein… It's at least a good start.

At Red State, Elizabeth Vaughn wonders Why Did Robert Mueller Choose Not to Tell Americans that the Dossier was False?. It's obvious, without it, they had no reason to continue and create process crimes. Kevin Brock on Da Hill says Jim Comey's damaging legacy at the FBI must be undone. The FBI is a classic example of how power gathered will be abused at some point. It's happened repeatedly. The FBI needs firmer oversight.

RCI opens my eye to an interesting "feature" in the original Horowitz report, Comey or 'Corney'? Stalking a Half-Popped Kernel of a Deep-State Kerning Conspiracy. Initially, searches for 'Comey' in the text came up empty, but searches for 'Corney' found him due to an unfortunate error in kerning. They fixed it.

Sundance at CTH captures an interesting interview with Joe Degenova where he Discusses Possibilities from Former NSA Director Mike Rogers Working With U.S. Attorney John Durham… and other subjects of interest, including corruption in the Ukraine and former Ambassador Yovanovitch.

From Matt Vespa at Town Hall, Intercept Co-Founder Shreds Adam Schiff As A 'Sociopath' After These Remarks About Carter Page. That's about right.

If you don't feel sympathy for someone who was wrongly smeared for years as being a traitor, and who was spied on by his own government due to FBI lying & subterfuge, then you're not only unqualified to wield power but probably also a sociopath.

Ace presents Rand Paul's Annual Airing of Festivus Grievances, and it has some funny Russiagate and impeachment stuff:

It’s going to be really hard to live with myself if I don’t get to sit in a chair all day long for weeks at a time listening to people talk about Rudy Giuliani.
— Senator Rand Paul (@RandPaul) December 23, 2019

Speaking of which, Olivia Nuzzi at the Intellingencer has A Conversation With Rudy Giuliani Over Bloody Marys at the Mark Hotel. It took too long for me. Clearly they both had too many. Nice Deb at AmGreat, Giuliani: ‘Saint Marie Yovanovitch’ Quashed Ukraine Probe Into Missing $5.3 Billion in Foreign Aid Soros was skimming half off the top, when the usual and accepted overhead rate is only 35%.

From Tyler O'Neil at PJ Media, Hunter Biden Is the Subject of a Criminal Investigation Involving Burisma, Legal Filing Claims. Well, you can claim anything, but proving it is another matter.


Hunter Biden is the subject of multiple criminal investigations regarding "fraud, money laundering, and a counterfeiting scheme" according to documents filed in an Arkansas paternity case. The documents, filed Monday by the Florida-based private-eye firm D&A Investigations, specifically name Burisma, the Ukrainian gas company that hired Biden to the board while his father, then-Vice President Joe Biden, was the Obama administration point person on Ukraine. 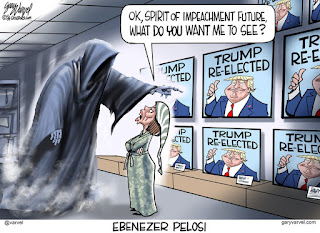 But the lawsuit has also revealed that Hunter Biden owns massive home in swanky Hollywood Hills, court docs reveal. $2.5 million sounds like a lot of money, but it ain't that much for the neighborhood. He probably has a Ferrari up on blocks in the front yard.

And impeachment; what can you say about impeachment that hasn't been said already? I dunno, but there's a shit load of new articles:

This whole thing is bizarre.

House Dems pushed through the fastest, weakest impeachment in history. Now Pelosi refuses to send it to the Senate, arguing McConnell should strengthen her shoddy case & bring “fairness” to her utterly unfair process.

Adam Mill at AmGreat, McConnell Crushed Impeachment in One 30-Minute Speech, Sundance at CTH has the video of Mitch McConnell at Fox: “Quit the Charade, this is a Political Exercise”…

But as AP notes, McConnell not ruling out witnesses in impeachment trial. “We haven’t ruled out witnesses,” McConnell said Monday in an interview with “Fox and Friends.” “We’ve said let’s handle this case just like we did with President Clinton. Fair is fair.” From DaLid (Jeff Dunetz) Hypocritical Schumer Fought AGAINST More Evidence And Trial For Clinton Impeachment. Predicting hypocrisy in politicians is a sure bet. Rachel Bovard at AmGreat, Senators Are Not Jurors 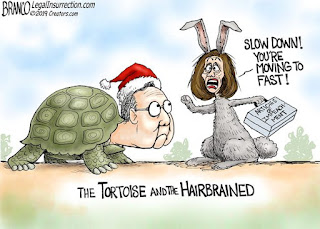 Unlike jurors who are instructed by the judge at the outset of their deliberation, each senator is imbued with the power to determine what constitutes an impeachable offense, and whether the prosecution has met that burden of proof.

CR, Mark Levin eviscerates Nancy Pelosi over her latest impeachment power play: ‘This is what the fascists do’, Not literally eviscerates, unfortunately.


The latest Pelosi gambit underscores the core constitutional argument that Trump supporters have been making from the outset: If you want to find “Abuse of Power,” as Professor Jonathan Turley just testified, the epicenter of its locus is in the corrupt Democrat House. And if you want to find “Obstruction of Congress,” well — what else do you call it when the House of Representatives passes a bill and then one Evita Perón wannabe says “Well, I won’t pass it along to the Senate, and you can’t make me”? 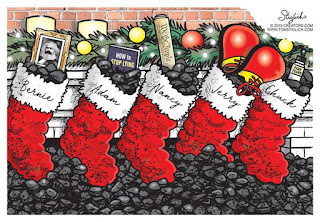 Capt. Ed at Hot Air, Senate Dem: I Could Vote To Acquit Trump If “Dots Aren’t Connected”. Doug Jones, Alabama getting cold feet. I wonder why. But Alex Bolton on Da Hill is holding out hope that Susan Collins set to play pivotal role in impeachment drama. That wouldn't surprise me. Sundance has Senator Kennedy on Impeachment: “Congress Doesn’t Suffer from Mental Illness, Most Seem to Enjoy It”… and  Doug Collins Discussing Possibility of Representing President Trump in Senate Impeachment…

and House Argues in Court Filing Don McGahn Testimony Needed for Impeachment Evidence… (maybe they should have waited out the courts?) and threatens to re-impeach Trump if they don't get him: House counsel suggests Trump could be impeached again. Trump goes for another record, the President with the most impeachments. MIGA!
Posted by Fritz at 11:02 AM