Before I get to the most recent rash of impeachment blisters, let's clear the deck of accumulated "Spygate" etc. As krakatoa at Acce's notes in EMT 12/07/19

Save us, Obi Wan Durham. You're our only hope.

Although, as Dan Chaitin and Jerry Dunleavy write at WaEx,  DOJ watchdog finds FBI omitted details about Steele dossier in FISA renewal applications, which will probably be ascribed to a incompetence, and not malice. Da Lid notices how The Deep State-Media Steam Calliope Tries To Shape Expectations Of Next Week’s DOJ IG Report. On the other side, OAN notes that President Trump touts Horowitz, Durham Reports To Detail Alleged Democrat Coup. Will they live up to his expectations? WaT, Corruption at the FBI, CIA and DOJ "Guardians embrace any means necessary to weaken or remove Trump from office"

Everything we are witnessing is the culmination of 8 years of the Obama administration: #Russia, #Ukraine, #Impeachment, Comey, Brennen, Clapper, Hillary, Biden, Rice, Schiff, Pelosi, Nadler & their underlings. They were counting on another 8 years and got caught flatfooted. https://t.co/gPwp00vyUh
— Katy Grimes (@KATYSaccitizen) December 5, 2019

From a real journalist, one under surveillance by Adam Schiff, John Solomon Reports The 10 most important revelations to expect from the Russia probe FISA report

But other that those, a total whitewash. Liz Vaughn at Red State reminds us of Lisa Page Text to Peter Strzok: ‘You get all our oconus lures approved? ;)’ Oconus being outside continental US, and lures being people sent to spy. Who and on who? Mifsud, and Halper come to mind, as do Flynn, Carter Page and George Papadop. Another oldie but goodie:

A bit of weird, possibly meaningless, news on that international man of mystery, Mr. Mifsud from Buzzfeed, The Curious Case Of Joseph Mifsud’s Lost Passport And Wallet. Hmm. Luppe B. Luppen and Michael Isikoff at YaHoo! Mueller witness bragged about access to Clintons secured with illegal campaign cash, says Justice Department. Well, you use the witnesses you have, not the witnesses you want.

First from Breitbart, Report: Rudy Giuliani in Ukraine to Interview Prosecutor Joe Biden Pushed Out, and boy is the WaPoo pissed, Giuliani returns to Ukraine, signals apparent disregard for inquiry. They're worried about him finding something.

And onto to impeachment malarkey, as Joe Biden might call it, if he were on the receiving end. President Trump has a different take, from Allah Pundit at Hot Air, White House Responds To Nadler’s Deadline: You Should End This Garbage Impeachment Inquiry. or as sundance interprets In summary: “Nuts!”

From Streif at Red State, President Trump Gives Nancy Pelosi a Foretaste of the Utter Hell an Impeachment Trial Will Be for the Democrats. The Senate trial should be amusing... At the Right Scoop, Mark Meadows caught a few tacit admissions from Pelosi today that she might want back…

1) Asked about key moments of the impeachment "investigation," she brings up polling

2) When asked RE: the speed of impeachment, she says "Mueller was appointed 2.5 years ago"

This is all about politics, and has been since 2017 pic.twitter.com/jsTrV1Pjaj
— Mark Meadows (@RepMarkMeadows) December 5, 2019

Althouse, "There appears to be an emerging consensus that the impeachment of Donald Trump won’t matter very much in November, 2020."


John Cassidy writes in "Impeaching Donald Trump Is Already a Win for Democrats" (The New Yorker), and I note the weasel words "appears" and "emerging" and the lack of specificity about the set of persons who are coagulating into this consensus.

Is he looking entirely at those who are hoping to steel the Democrats to get through this next phase?


If we’ve never had a scandal like this before, it’s in part because it is legally dubious. Federal law bars phone carriers from handing over records without an individual’s agreement. The statute makes some exceptions, including for federal and state law-enforcement agencies.

But not for lawmakers. “There does not appear to be any basis to believe that a congressional committee is authorized to subpoena telephone records directly from a provider—as opposed to an individual,” former Attorney General Michael Mukasey tells me.

Maybe that’s because no one would have conceived of Congress needing to peruse private phone records. Its mission is writing laws. Or it might have been in recognition that Congress has no outside check on its subpoena powers. Law-enforcement subpoenas generally entail court supervision, helping to ensure they have a valid purpose. Mr. Schiff, working in secret, unilaterally decided he was entitled to see the phone records of private citizens.

But Phil Wegmen at RCP has news for Shifty Adam, White House: Adam Schiff Has Wrong OMB Number. David Harsayni at NR is hot about Adam Schiff’s Attack on the Free Press. Ace, Adam Schiff: This Phone Record Proves that the OMB Called Rudy Giuliani. That Is All the Proof We Need That He Was Lobbying to Deny Ukraine Aid.

Instead of deploying Oliver Darcy to pressure FaceBook and YouTube into deplatforming Adam Schiff as a constant source of fake news from foreign sources, they instead promote his every false claim. 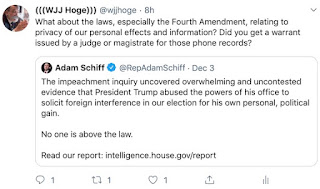 Sister Toldja at Red State, Doug Collins to Jerry Nadler: Hey, Y’all Know Republicans Are Allowed a Minority Day of Hearings, Right?. What, you thought this wasn't Calvinball? Dan Sobieski at AmThink, lectures us on Queen Pelosi's Abuse of Power.

Capt Ed at Hot Air has sympathy for Turley: Many Unfunny Things Happened At And After The Impeachment Forum. The radicals are trying to get him fired. I guess they haven't heard of this tenure thing.

At Wapoo, Hugh Hewitt thinks Impeachment is a flop for Democrats. So is their presidential field. He might be on to something. CNS News, Trump’s Approval Jumps to 52% Same Day Pelosi Announces Impeachment Will Proceed and  PJ Media, Impeachment Is Great for Trump: Approval Rating Rises to 52%. Please don't throw me in dat briar patch! Stephen Kruiser at PJ Media, The Morning Briefing: Impeachment Is Quite the Cash Cow for President Trump "The article notes that the Trump campaign took in $15 million in small-dollar donations in the first three days after Pelosi announced the inquiry."

Dr. John at Flopping Aces thinks he knows Why it’s so imperative that Trump be impeached and removed from office.


It’s not to save the country from Trump. It’s to save democrats from Trump.

“I do hate what he is doing” says Schiff.

Without a doubt. The country is doing very well. democrats have lost hope for a recession. They want impeachment because they believe they will lose in the Courts.

They want to impeach Trump because they know they cannot beat him in a fair election now. . . .

As David Harsanyi, at NYPo reminds us that Trump’s supposed abuses pale in comparison to past presidents, at the Volokh Conspiracy, where only serious legal thinking is allowed, Keith Whittington wonders Can the House Impeach a Former President? and comes up with a firm "maybe". The point is more the censure than the removal from office.


But some state constitutions explicitly authorized their legislatures to impeach former officers, sometimes while imposing a time limit on how long the former officer was at risk of impeachment, and none prohibited it. The federal constitutional framers did not clearly rule it out, though they were aware that such applications were understood to be within the scope of a legislative power of impeachment.

If impeachments are a "grand inquest" into the conduct of public officials, then there is no necessary reason why that inquest should be cut off by an officer's departure from office. If impeachments are to deter public officers from gross misconduct, then leaving the door open to a legislature scrutinizing the conduct of former officers is potentially useful. If impeachments are to protect the republic from dangerous officeholders, then the ability to disqualify a former officer who has been demonstrated to have committed grave abuses of office in the past might be valuable.

Your testimony was very strong, sensible, kind and incredibly important to our future as a nation. It is sickening to see how demonic their hate truely is. Now they want to destroy you too, it’s evil. My support & prayers are with you Professor. https://t.co/QOrVPa9KaF
— Kristy Swanson (@KristySwansonXO) December 6, 2019

And to finish the set, more links from the Wombat's In The Mailbox: 12.06.19 (Evening Edition): American Greatness: Impeachment Is Trump’s Punishment For Questioning The Intelligence Committee, American Thinker: Democrats Are Pushing America Into Civil War, First Street Journal: Do The Left Have Anything In Their Hearts Besides Bitterness & Bile?, Legal Insurrection: Trump Won’t Participate In Monday’s Impeachment Hearing, Power Line: Mandarin Media Not Even Trying To Hide Their Bias Anymore, Volokh Conspiracy: New On Lawfare – Defining A Theory of “Bribery” For Impeachment and Weasel Zippers: Democratic Rep On Impeachment Rush – We Can’t “Wait For An Election” to Decide Who Is President.

Linked at Pirate's Cove in the weekly Sorta Blogless Sunday Pinup and links.
Posted by Fritz at 10:21 AM