A surprising amount of Spygate for a Sunday morning. First, from WaT, FBI had spies inside Trump campaign: IG


The FBI had operational informants inside the Trump campaign and among Trump associates, according to the Justice Department’s inspector general report. The finding appears to be the first official confirmation that there were FBI-paid spies, called confidential human sources (CHS), close to President Trump.

But don't you dare call it spying. But will they do anything about it? Maybe. Paul Mirengoff at Power Line, Will John Brennan be indicted? Thomas Lifson, AmThink,  Bill Barr Brennan Bombshell: Durham seeking Brennan's emails, call logs, and other documents from the CIA. A lovely twitter thread from The Last Refuge (sundance at CTH), OK, so here's a little thread on the specifics hinted in this article.... => Durham Is Scrutinizing Ex-C.I.A. Director’s Role in Russian Interference Findings

From Da Intercept, Former NSA Director Cooperating With Probe of Trump-Russia Investigation. Adm Rogers is one of the good guys. He broke the story of the abuse of the NSA phone database by the FBI early, and the Obama crowd set off to get him, much the way they went after Flynn, but less successfully.

NyPo Editorial Board, If FBI was routinely cutting corners on FISA warrants, Comey will look even worse. Was it all FISAs, or only the one clearly aimed at Trump? Comey looks bad either way.  Da Caller, Richard Jewell, Carter Page And The Illusion Of The FBI’s Power And Competence.  Althouse, "The Steele dossier was central to obtaining the Page warrant, and the leaks about the dossier fanned two years of media theories about Russian collusion..."


"... that was one reason Mr. Mueller was appointed as special counsel. Mr. Mueller owed the public an explanation of how much of the dossier could be confirmed or repudiated. Instead he abdicated, and the mystery is why. Perhaps as a former FBI director, Mr. Mueller wanted to protect the bureau's reputation... A less generous explanation is that Mr. Mueller was more a figurehead as special counsel, and that the investigation was really run by his deputy Andrew Weissmann.... On the evidence in the Horowitz report, the special counsel team had to know the truth about the Steele dossier and false FBI claims to the FISA court, but they chose to look the other way."

From "Robert Mueller's Dossier Dodge," an editorial in the Wall Street Journal.

Twitchy, Kimberley Strassel isn’t buying FISA judge ‘only now acting shocked and angry’ about FBI abuses. Me neither. James Bovard, USA Today, Inspector General report on FBI's FISA abuse tells us one thing: We need radical reform. My first reform would be an office responsible for making the counter case against a FISA warrant. The current unopposed system is an invitation for abuse. I'll be surprised if Horowitz doesn't uncover more, if not on the scale that occurred against Trump Page. John Kass at ChiTrib, Will Washington media expose the liars who spun the Trump-Russia hoax? You must be joking. Adam Schiff says 'it's hard to be sympathetic' to Carter Page amid FISA abuse revelations (Fox). He was only a CIA spy that you guys outed, ala Valeria Plame. But then, I'm having trouble mustering any sympathy for Schiff over this: Judicial Watch Slaps Schiff and the House Intelligence Committee With a Lawsuit. And Judicial Watch has a pretty decent legal record. Ace, Former AG Mike Mukasey: Adam Schiff Broke the Law in Subpeonaeing Phone Records from Verizon and AT&T.


Specifically, Judicial Watch wanted information about private phone records that were released as part of the Democrats' partisan impeachment push against President Donald Trump. The revelation came about on page 153 of the House Intelligence Committee's report on its investigation into Ukraine.

Sundance has a long Sidney Powell Extensive Interview With Eric Metaxas… It's worth watching in its entirety.

A thread from Roscoe Davis,1) Always remember, from the very beginning, they were against him, long before he was elected. This is who the swamp is. Lie, cheat, and steal. @realDonaldTrump has faced the headwinds and delivered everything he said he would. At Da Caller, JD Gordon, Former Trump Campaign National Security Advisor, tells how The Deep State Resistance Terrorized Innocent Americans, Including Me. 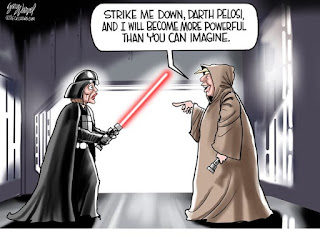 Regarding Nancy Pelosi's on again, off again impeachmentlite, Cocaine Mitch McConnell: ‘I’m Not Sure What Leverage There Is in Refraining From Sending Us Something We Do Not Want’ (Red State) and from Rudy Takala at Da Caller, Dershowitz: Pelosi Doesn’t Have The Impeachment Power She Believes


“I can imagine nothing more unconstitutional than a House impeachment without sending it to the Senate,” Dershowitz said. “It’s just unheard of. The Constitution provides that it is a two-step process, not a one-step process. It doesn’t say the president may be impeached, period, that’s the end of the matter. It says the president may be impeached, and if he’s impeached by the House, the Senate then gets to decide whether he should be removed.

“The idea that a stain would remain on the books, that the president would remain impeached, without an opportunity for the president to get acquitted by the Senate, is plainly unconstitutional,” he added. “It would be as if a prosecutor decided he had insufficient evidence to get a conviction, so he went after an ordinary citizen and said, ‘Look, I’m just going to indict him. Let the public know he’s indicted. For the rest of his life, he will stand indicted. But I have no intention of bringing him to trial. I will deny him his Sixth Amendment right to a speedy trial. I’m going to let the indictment just hang out there.’ Obviously, no judge would tolerate that.” 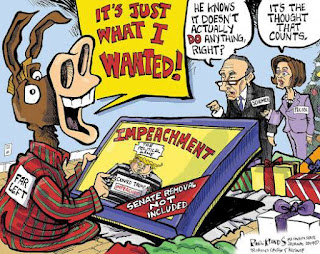 Da Wire, CONFUSED? Here’s What Comes Next In The Impeachment Of President Trump, while the Spectator USA calls it The impeachment process we deserve "The gavel will fall. Trump will remain in office. Democrats will mourn. Pollsters will poll and 2020 will be a nasty, nasty election." The never-Trumpers at the Bulwark warn of America’s Mitch McConnell Problem and at the WaPoo, the Flake whines The president is on trial. So are my Senate Republican colleagues, and the completely objective Bloomberg News reports Senator Oath for Trump Impeachment Trial Stirs Partisan Rancor.

“They have to pledge to do impartial justice,” Nadler said. “And here you have the majority leader of the Senate, in effect the foreman of the jury, saying he’s going to work hand in glove with the defense attorney.”
. . .
McConnell on Tuesday dismissed the idea that he has to be impartial. “I’m not an impartial juror,” he told reporters. “Impeachment is a political decision. The House made a partisan political decision to impeach. I would anticipate we will have a largely partisan outcome in the Senate.”

There still remain 75+ vacancies on the federal bench. I'm sure the Senate can keep busy, even without impeachment articles to act on. https://t.co/syFAiAUzlx
— Andy Grewal (@AndyGrewal) December 20, 2019

Althouse, "We face the horror of Trump because the structure of American democracy gives disproportionate power to a declining demographic group passionately convinced of its right to rule."


"Trump, with his braying entitlement, his boastful ignorance, his sneering contempt for pluralism, is an avatar of a Republican Party desperate to return to the 1980s, or the 1950s, or maybe the 1910s. He can’t betray America if, to those who fetishize the 63 million, he embodies it.... Democrats didn’t want to impeach, but once they decided to, Trump’s insistence that his Electoral College victory grants him impunity didn’t work. For one night, democracy asserted itself....

Writes Michelle Goldberg in "The Tyranny of the 63 Million/Impeachment didn’t undermine democracy. It vindicated it" (NYT).

What happened to the reverence for the Framers and the Constitution? The Framers were not all for majoritarian democracy, exercised moment by moment. They came up with the Electoral College and presidential terms of 4 years. 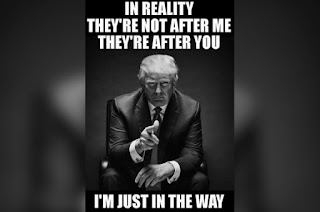 Scott Jennings at CNN? Donald Trump was elected to break the elite. Of course they want to impeach him, and at NYPo, Michael Goodwin, propounds on the meme Donald Trump’s ‘they’re after you’ tweet says it all: Goodwin


On its face, a tweet President Trump sent last week is fairly benign. It doesn’t mock anyone, isn’t personally nasty and hasn’t caused any hair-on-fire controversy.

Yet it is powerful in its own way, for it artfully sums up the Trump era from the perspective of the president and his supporters. With a likeness to the Uncle Sam “I want you” poster, the disrupter in chief reaffirms in 14 words the belief of Trump Nation that the political establishment, the media, the permanent bureaucracy and yes, the deep state, are trying to crush him and them.

The president tweeted the image the day House Democrats voted to impeach him, and hours after his raucous rally in Michigan that evening. The tweet included no added comment because none was needed. The message is clear: I am all that stands between you and the barbarians at the gate. If I fall, you are next.

Critics regard it as fear-mongering, and there is no denying that the president wanted to rally his base, lest it be discouraged by the day’s events. Yet Trump’s oblique reference to a weaponized and powerful adversary is hardly ­unfounded, with a partisan, flimsy impeachment the latest example. The tweet’s siren call to believers is a shorthand way of saying that impeachment is just a continuation of the endless attacks against us.

Yahoo! warns Trump Quest to Expose Whistle-Blower Hard to Pull Off in Senate. Depends on whether witnesses are called.

My heart bleeds as Impeachment maelstrom sucks in a chief justice who shuns politics. You wanted to run with the big dogs.


He told Piro when asked his view of impeachment: