Russiagate, or Should that Be Rush-a-Gate

Better late than never I suppose. I had breakfast with friends early, got home, and just now ran out of things to procrastinate with.

CNS News, WH Adviser: Like Obamacare, Pelosi Thinks ‘We Have to Impeach Him and Let’s Figure Out Facts Later’, Heh.

CNS News, Trump: ‘If You Are Going to Impeach Me, Do It Now, Fast, So We Can Have a Fair Trial in the Senate’   Sundance, President Trump Responds To Speaker Pelosi Announcing Assembly of Articles For Impeachment…


Trick No. 1 is the bait and switch. Dems have already laid the bait. They swear they're reluctant to drag the nation into impeachment, but their duty to defend the rule of law requires it. "Our job is to follow the facts" and "apply the law," says committee member Hakeem Jeffries, D-N.Y. "No one is above the law," House Speaker Nancy Pelosi insists.

Now get ready for the switch: At the hearing, Democrats and their handpicked legal experts will argue that a president can be impeached without breaking a law. Suddenly, impeachment isn't about upholding the rule of law. The grounds are broader -- wide enough to drive a truck through. 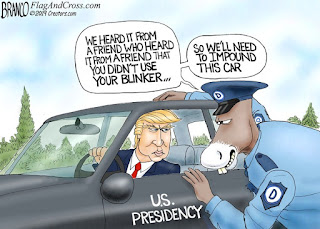 WSJ Notices, ‘The Interagency’ Isn’t Supposed to Rule; "The Constitution gives the president, not a club of unelected officials, the power to set foreign policy."  Joe Cunningham at Red State, The Impeachment Clock Has Expired. They gotta find something real soon, or else.   I wouldn't put it past the Democrats to attempt to add days to the calendar. Kurt Schlicter opines The Democrats’ Massive Impeachment Fail, Rushbo, Forget Bribery, Now It’s Abuse of Power.and Althouse asks Has Rush Limbaugh declined in the Trump Era? If so, is it because of Trump?. Dunno, never really followed Rush. Althouse, "It’s always a constitutional crisis when liberals don’t get what they want." CNS News, Rep. Gaetz: Schiff Report Is 300-Page Fairy Tale, Like Hearing From the Tin Man's Cousin... (or maybe the Scarecrow's who had no brain).

The last sane democrat, Yang: Come On, Impeachment’s A “Loser” And We All Know It (Capt. Ed, Hot Air), also, CNN: Three House Dems Signal Opposition To Impeachment — And Perhaps The Only Gettable Republican. CNN, Democrat announces retirement, says Russia probe and impeachment inquiry 'have rendered my soul weary'.  Mollie at WaEx, Impeachment Is Slowly Destroying Democrats’ 2020 Political Hopes. I hope so.  Matt Batzel at AmGreat,  Impeachment is Backfiring in the Midwest and Charlie Martin at PJ Media, Why I Still Don't Think Trump Will Be Impeached 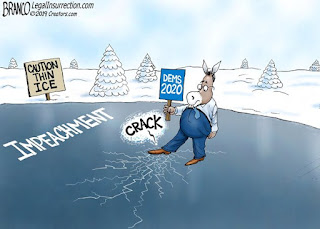 Let's hypothetically assume articles of impeachment were voted and sent to trial in the Senate. Then what?

Who is subpoenaed first? It's going to be a race among Adam Schiff, Eric Ciaramella, and Mark Zaid (Ciaramella's lawyer). Followed by Schiff's staffers, Vindman again, other Democrat members of the HPSCI.

You can expect extensive declassification. In particular, of transcripts of the closed-door meetings that Schiff won't release. (Hint: Classification is under the president's authority, not a Congress member's.)

After yesterday, you can expect extensive subpoenas of communications records.

You can expect (yet another) rehash of the last three years, and you can bet that the GOP will be out for blood.

And About Those Phone Records (Scott Johnson at Power Line)


Contrary to the RedState post on which John relied here, it does not appear that the Democrats obtained the phone records of Ranking Member Nunes or journalist John Solomon (or of Nunes staff member Derek Harvey). Rather, the Democrats appear to have obtained the AT&T cell phone records of Rudy Giuliani (including Giuliani Partners) and the recently indicted Lev Parnas.

The call logs in the endnotes include a few of Giuliani’s calls with Nunes and with Solomon. Two calls from Parnas to Nunes are set forth in the log on page 157: one for 1:00, one for 0.02. There is one call from Nunes to Parnas, but the duration indicated is 0:00. 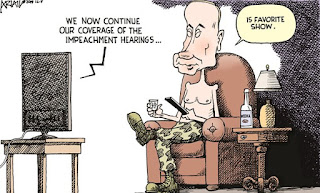 Matt Vespa, Town Hall, WSJ Editorial Board: Did Anyone Catch Adam Schiff’s Petty Revenge Against the GOP in His Impeachment Report?  At WaEx, Scalise: Schiff 'spying' on Nunes with call records. and Margot Cleveland at Da Fed, Why Devin Nunes’s Phone Logs Aren’t A Smoking Gun


The end goal, of course, is impeachment, but to get there Democrats hope to first sideline Nunes—something they tried before when the left first began pushing the Russia collusion hoax. But while then-Speaker Paul Ryan, R-Wis., benched Nunes temporarily from leading the Russian election interference probe based on unfounded ethics charges, House Minority Leader Kevin McCarthy has Nunes’s back, telling reporters, “there’s nothing wrong that Devin has done except once again to get accused of something.”

1) Still waiting for my fellow members of the media to express their deep outrage and alarm that Intelligence Chair Schiff snooped thru and published phone records of member of the free press. The silence is deafening.
— Kimberley Strassel (@KimStrassel) December 4, 2019

“Democrats were caught using the Steele dossier to coax the FBI into snooping on the 2016 Trump campaign. Now we have elected members of Congress using secret subpoenas to obtain, and then release to the public, the call records of political opponents.” https://t.co/bFhNrvEYbW
— Nick Short 🇺🇸 (@PoliticalShort) December 5, 2019

Press: THIS IS THE END OF DEMOCRACY

Schiff: Here Is A US Journalist's Private Phone records

Insty, ANN ALTHOUSE SAYS THE MAIN THING PEOPLE WILL REMEMBER FROM THE LAWPROFS’ IMPEACHMENT TESTIMONY IS THAT THEY MOCKED A KID:


“Watch that clip again. She believes she’s got something. But it was too good of a line. Everyone noticed. And now, it’s almost the only thing that was noticed in all that tangle of law/’law’ that the professors strewed before us yesterday. So it was a big fail for the anti-Trump lawprofs. The look of it from a distance was that they hate Trump and they were called by politicians who hate Trump to express hate for Trump.” 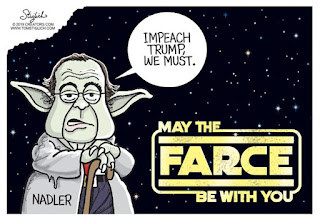 Susan Jones, CN News, (Kevin) McCarthy Echoes Turley: The Only Abuse of Power Is What Dems Are Doing. They weren't counting on his vote. Phil Weggman at RCP, Turley Doesn't Like Trump -- But Republicans Love Turley. It's not necessary to like Trump, but it's nice to pay some heed to the constitution.

Vanity Fair worries that Mitch McConnell Is Fully Prepared to Shut Democrats Out of Impeachment. Turnabout is fair play. Sundance considers The Senate and Impeachment Dynamic…


As the House impeachment of President Donald Trump becomes more of a forgone political conclusion it’s worth considering what terms and conditions Senate Leader Mitch McConnell will extract in order to preserve a Trump Presidency.

At least a gold toilet in the majority leaders office bathroom.

Allah Pundit, Napolitano: Trump Will Testify At His Impeachment Trial And It’ll Be The Most Dramatic Political Event Of Our Lifetimes Has he been into to brownies at work?
Posted by Fritz at 11:53 AM