Some Russiagate Presents to Open

Gosh I hate to do this, but it just never stops. Stacy McCain leads of with The CIA and Conspiracy Theories


For most of my adult life, the Central Intelligence Agency featured prominently in the paranoid worldview of the Left. After all, it is a matter of fact that the CIA fomented coups against pro-Communist governments in various Third World countries, so why shouldn’t the Left — which during the Cold War was always supportive of America’s Communist enemies — fear the shadowy influence of the CIA everywhere?

During the 1970s, for example, some radical feminists cited the fact that Gloria Steinem had once been involved in a CIA “front” group as evidence that the Women’s Liberation Movement had been “infiltrated” by government agents. That kind of Nixon-era paranoia persisted into the Reagan/Bush years, because hadn’t Bush the Elder once been CIA director? Also, “Skull and Bones” at Yale? And what about Cointelpro, huh? Remember Fred Hampton! Free Huey Newton!

The paranoid tendencies of the Left have, however, taken a different turn lately, and now they are convinced the CIA is their friend:

Which is just an introduction to a paying gig with AmSpec, The ‘Deep State’ and the Impeachment Conspiracy - What did John Brennan know and when did he know it?. Click on that one so he gets the karma points.

Ace notices how Bill Barr's DOJ Indicts Pedophile/Mueller Source George Nader and Seven Others For Conspiring to Make Illegal Donations to Democrats, Including Adam Schiff "Why are so many child molesters Democrats?" At Flopping Aces, Dr. John notes Signs Barr and Durham are getting close to Obama. I think he's overly optimistic. If you think the current fuss of investigating the Bidens in the Ukraine is hysterical, the one for investigating Obama over domestic spying would be apocalyptic. Which is not to say it didn't happen. Sundance looks into the IG report and thinks he can identify the Confidential Human Source from withing the Trump campaign, IG Footnote 474 – Confidential Human Source, W/ Delta File, Previously Inside Trump Campaign…, Former House Intelligence Committee Chairman Mike Rogers. At Da Wire, McCarthy Compares FBI Scandal To Infamous Scandal; Makes Recommendations For Trump In Senate Trial. As I said yesterday, it's much worse than Watergate, resources of the country's intelligence agencies were used to target political opponents, not just a couple overly zealous private burglars. And from Chuck Ross at Da Caller, Trump: ‘Getting Rid’ Of ‘Evil’ FBI Officials ‘One Of My Greatest Achievements’ He's not wrong. 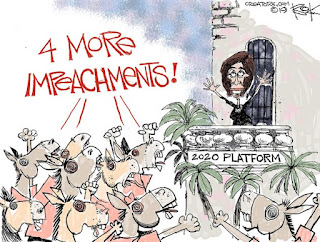 On the Shampeachment, Kurt Schlichter says Shhhhh…Just Let the Democrats Schiff Themselves


Military guys – and I am a graduate of the Army War College, which is not the one with noted expert on expertise Tom Nichols – try to abide by the apocryphal advice of Napoleon, who counseled that you should never interrupt your enemy while he is making a mistake. But this doesn’t apply to the Democrats because they are not only too dumb to listen to your warnings but their weird dogma actually makes it impossible for them to imagine that they are heading for disaster in 2020. So, I’m going to mock these losers mercilessly, safe in the knowledge that even though I am telling that anime lollipop-looking twerp Adam Schiff and Jerry the Oompa Loompa Nadler exactly what is going to happen, they are powerless to stop it. 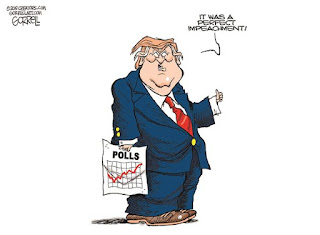 and Monica Showalter at AmThink thinks Democrats' impeachment dealings reach for the absurd.


They're really started to look like idiots here, a veritable clown car of illogic, effectively demanding that Republicans clean up their messes of their own making and deliver the result Democrats themselves couldn't deliver.

From Capt. Ed at Hot Air, Law Prof: The Senate Isn’t Required To Hold An Impeachment Trial At All. You can find a law professor who will say anything you want, but the fact is, impeachments are rare enough that they're making up the rules as they go along, and the Supreme Court is unlikely to intercede. So, if the Senate does it, it's likely to stand.

Mike LeChance at LI, has Newt Gingrich saying Democrats Delaying on Impeachment “to See if They can Create More Evidence”. That's about right. At AmSpec, Betsy McCaughey The Impeachment Gang’s Witness Wars - The Democrats’ delay game is now entering its desperate stage as Kevin Daley at Da Caller sees House Lawyers Say They May Use Mueller Grand Jury Materials In Senate Impeachment Trial, because it worked so well last time.

And from the In The Mailbox: 12.24.19 (Evening Edition), Twitchy: Yale History Prof Claims McConnell Has No Power To Shape The Impeachment Trial, Power Line: We Now Know – Devin Nunes Reflects and Mark Steyn: Baby, It’s Cold Outside.
Posted by Fritz at 8:46 AM