Are we going to find diamonds or coal in our stockings? If you want to get the present yourself, check out the DOJ site for the Office of the Inspector General, where it will be posted. It's not there yet . . .  Meanwhile, from Marty Johnson on Da Hill, another prediction, Horowitz report expected to clear FBI of misdeeds in Russia probe

The Justice Department's report that is expected to conclude that the FBI's federal investigation into potential links between Russia and President Trump's 2016 campaign wasn't politically motivated will be released Monday.

Inspector General Michael Horowitz, who wrote the report, is said to have found that there was enough evidence to justify the FBI wiretapping Carter Page, Trump's former campaign adviser who reportedly had contact with Russian officials multiple times.

People familiar with the report told the Los Angeles Times that the contents of the report will not only exonerate the FBI but also largely dismiss claims from the Trump administration and its allies that the federal agency broke the law in search of evidence and purposely went after Trump's campaign.

“Now, what you’re going to see, I predict, will be perhaps the biggest scandal in the history of our country,” Trump told Fox News last month.

That said, people close to the report also told the newspaper that Horowitz did find several instances of FBI agents and officers acting in careless and unprofessional ways.

To my most pessimistic friends. Regardless of whether the IG report pleases, disappoints or straddles the fence, it is sure to expose many facts. And this corner of Twitter will use and crowdsource those facts (and may rip a wormhole into the fabric of the swamp universe).
— brennan'sorangejumpsuit (@15poundstogo) December 8, 2019


Back in April, I predicted this “Russia-made-us-do-it” excuse.

It has been reported that Attorney General William Barr disagrees with this conclusion, based in part on U.S. Attorney John Durham’s criminal investigation into the origins of the Russia probe. The IG performed a limited in-house review that could not explore the larger questions of alleged Russian interference. Durham’s inquiry, in contrast, has authority to investigate whether the Russia saga was a false flag operation launched by the Democratic National Committee, using the CIA and friendly governments around the world, particularly the Western puppet in Ukraine.

Here are the known facts. .

In 2010, Viktor Yanukovych was elected as president of Ukraine. Three years later he would make the mistake of not signing an association agreement with the European Union. John McCain flew to Kiev to rally support for the EU. McCain reported to the Atlantic Council about his trip. President Obama told CNN’s Fareed Zakaria that he had “brokered a deal to transition power in Ukraine.” The word “brokered” suggests that the Obama administration successfully replaced a government half a world away at the behest of Washington’s smart people.

Vice President Joe Biden took control of anti-corruption efforts in the country while his son Hunter received up to $3 million from a large Ukrainian energy company only months after being discharged from the U.S. Navy for drug use.

Letting Hunter fleece an impoverished nation to buy strippers and cocaine because his dad was in charge was a side-benefit to the arrangement. The bigger prize was that political control made possible what is always the real payoff of machine politics: manipulating elections.

There can be little doubt, at this point, that Ukraine attempted to interfere in the 2016 U.S. presidential election on behalf of the Washington establishment’s preferred candidate, Hillary Clinton. As I noted in March, Politico ran a piece headlined “Ukrainian Efforts to Sabotage Trump Backfire” on January 11, 2017, reporting that Alexandra Chalupa, a Ukrainian-American operative, began doing opposition research for the DNC on Trump in late 2015. The piece concluded that, “The Ukrainian efforts had an impact in the race, helping to force [Paul] Manafort’s resignation and advancing the narrative that Trump’s campaign was deeply connected to Ukraine’s foe to the east, Russia.” . . .

NEW: The timing of the IG report’s release tomorrow has irked some former officials Horowitz interviewed, who told us that the standard review period afforded in an IG probe seemed rushed so it would be released in the middle of impeachment proceedings.https://t.co/fhFDFMYXHO
— Natasha Bertrand (@NatashaBertrand) December 8, 2019

How dare they overlap with the permanent impeachment! Of course, a lot of people were also thinking the converse, that the impeachment was being timed to cover the IG report.  At Red State "Streif" warns us Don’t Look for What Questions the DOJ IG Report Asks, Look for the Ones It Avoids


The salient question is this: If the FBI did have reason to suspect that the Trump campaign contained one or more people in senior positions who were actively working with a foreign government that was not Ukraine, then why was Donald Trump, the candidate, never briefed on the problematic staffer and given the chance to fire him but rather subjected to a degree of political espionage by the federal government that the US has not known since the break-in at the Watergate in 1972?

On Da Hill, Tal Axelrod reports Trump: Giuliani to deliver report on Ukraine trip to Congress, Barr and boy does that have the Democrats riled.


Giuliani raised eyebrows this week when he traveled to Ukraine as the House conducts a whirlwind impeachment investigation into whether the president abused his power. Democrats say Trump overstepped his bounds by pressuring Kyiv to investigate former Vice President Joe Biden on unfounded corruption allegations and disproven claims that Ukraine was involved in 2016 election meddling.

You mean like investigating the President for three years based on unfounded DNC funded allegations? Streiff at Red State again. TOTALLY LIT. Ted Cruz Wipes the Studio Floor With Sleepy Chuck Todd Over Ukraine Helping Hillary in 2016,  sundance at CTH, Sunday Talks: Ted Cruz -vs- Chuck Todd…  and Althouse has the video at Did Chuck Todd actively prevent Ted Cruz from detailing how Ukraine supposedly interfered in the 2016 election?


In a fantastic display of true investigative journalism, One America News journalist Chanel Rion tracked down Ukrainian witnesses as part of an exclusive OAN investigative series. The evidence being discovered dismantles the baseless Adam Schiff impeachment hoax and highlights many corrupt motives for U.S. politicians.

From WaEx, Slow Joe comes up with another excuse, Biden: ‘Nobody warned me’ about Hunter and Ukraine because Beau was dying. That's sad, but if you were too choked up to do your job, you should have resigned. No one would have blamed you. But good news for Joe from sundance, Oh Snap – Senator Lindsey Graham Pledges to Block Testimony of U.S. Politicians Coordinating With Ukraine…. Gotta keep the gravy train rolling. Video at link. He still intends to stop the impeachment, but not at the cost of upsetting the "triangular trade" of money from US aid to Ukraine, to corrupt Ukraine businesses, and back to US politicians, and their sprouts.

Biden’s outburst — “You’re a damn liar, man,” he snapped — showed that he still thinks any questions about his son’s windfalls while he was vice president are out of line — even though Hunter himself has acknowledged using “poor judgment.”
It also showed that he has no answer for something that’s bound to be a big part of the general campaign, since it is at the heart of the crazy Rudy-Donny conspiracy theory that provoked the impeachment drive. If Joe Biden can’t handle an 83-year-old retired farmer without losing his cool, how can he handle a 73-year-old piranha?
Withholding $400 million in military aid to a fledging democracy under attack from Russia is in a different universe than making a quick buck off the Washington influence machine. But that farmer is not the only voter who feels a little queasy about Joe Biden not stopping Hunter from making a money grab in Ukraine while the vice president was pushing the Ukrainians to be less corrupt.

Notice that Dowd accepts that Hunter Biden made lots of money off his father's position — "windfalls," "a quick buck," "money grab." And she thinks the Iowa guy had a good question even if it was a little defective (in saying Biden sent his son). There are millions of others who want an answer to a legitimate question, and answering questions shouldn't depend on phrasing them exactly right. I agree with Dowd that Biden's response "showed that he has no answer."

Can't say I blame them, Ukrainians Are Sick of Trump, Impeachment and Being Talked About. Clean up your act and we'll consider it. I would love a day without hearing about Ukraine. 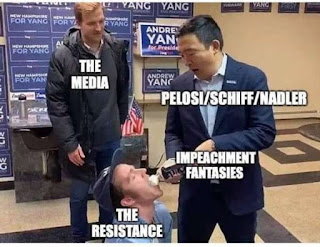 CNN Gets Triggered By a Supercut of Their Impeachment Coverage, Has It Removed From YouTube (But We Have It)

Impeachment's Next Phase Could Hit Biden Worst of All | RealClearPolitics

Suppose They Threw an Impeachment and Nobody Came?

Doug Ross @ Journal: MARK LEVIN: The Next Democrat President Must be Impeached 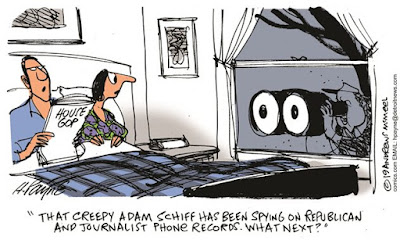 Democrats embrace exact surveillance tactics they used to warn about

Democrats zoom in on Trump impeachment charges this week

Instapundit » Blog Archive » DEMOCRACY DIES IN DARKNESS AT NOON: I remember when McCarthyism was supposed to be bad….