The Sunday talks after the week where the Horowitz Report dropped, Horowitz himself testified to the Senate (the House apparently wasn't interested in what he had to say), and the House Judiciary Committee passed two articles of impeachment against the president. Lot of action. First, this interview of fired FBI director James Comey with Fox News' Chris Wallace; from Sundance at CTH, Sunday Talks: Sanctimonious James Comey -vs- Insufferable Chris Wallace…

Comey gets around to admitting that things went wrong, but never admits to accepting any share of the blame. Fox News, Comey admits ‘I was wrong’ on FISA conduct, remains defiant on dossier in tense interview.  Ann Althouse has the best analysis: Chris Wallace pushed James Comey to choose between "gross incompetence" or "intentionality," and it's easy to see why he wouldn't.


But I want to focus on something that happened in the end. The interviewer, Chris Wallace, quoted the Inspector General, Michael Horowitz, on the FBI's handling of the Russia/Trump investigation.

We see a video clip, with Horowitz saying: "It's unclear what the motivations were. On the one hand, gross incompetence, negligence. On the other hand, intentionality."

Horowitz doesn't decide. He leaves it open. It was either "gross incompetence" or "intentionality." So which was it? If you were James Comey, who was the director of the FBI, which would you prefer it to have been? Both are terrible, but for different reasons, and — if we knew which one — very different consequences.

Comey tries to avoid choosing. He intones what we already know, that the IG "doesn't conclude that there was intentional misconduct by these career special agents." That's part of the question asked and exactly not what is called for in an answer.

Comey uses the same move he used when the question was asked the first time. He tells us — again! — that the IG "doesn't conclude that there was intentional misconduct by these career special agents." Now, it's obvious that Comey is deliberately avoiding the question. He's supposed to pick. Which is it — "gross incompetence" or "intentionality"?

Embrace the healing power of "and." Da Wire, Chris Wallace Shreds Disgraced Former FBI Director James Comey In ‘Devastating’ Interview. Did they watch same interview as sundance? Breitbart, Donald Trump Demands Apology After James Comey Admits ‘I Was Wrong’ Like that'll happen. Miranda Devine NYPo, James Comey is eerily skilled at selling delusions: Devine. I don't think he sold them that well. Chuck Ross at Da Caller, Gowdy: ‘Too Damn Late’ For Comey To Admit He Was Wrong About FISA Abuse. Nicholas Ballasy at PJ Media, Comey Says He Wouldn't Resign Over FISA Mistakes if He Was Still FBI Director.  Of course not, that would require that he accept some responsibility for what happened at the FBI under his watch. Ace, Is Comey Setting The Stage For A Legal Defense?  Probably. Robby Soave at Reason, James Comey Asked the American People To Trust the FBI. Why Should They? They shouldn't. Insty, JUST ASK RICHARD JEWELL. Debra Saunders, AmSpec, The FBI Did Russia’s Dirty Work "And that very much included the disgraced James Comey." Uh huh. Finally, via sundance Sunday Talks: Gowdy and Strassel Respond to James Comey Interview…

Sundance channels Devin Nunes: The FISA Court and FBI “Dirty Cops” are Working Together to Harm Americans… and whacks Adam Schiff around for his lies about the FISA warrants.

Chuck Ross at Da Caller, Schiff Refuses To Say He Was Wrong About FBI’s Surveillance Of Trump Aide. How can he be wrong about that and right about impeachment? Stephen Kruiser, PJ Media, Schiff Offers Laughable, Untruthful Excuse for Ignoring FISA Abuses

From Twitchy, Kimberley Strassel finds one line buried in IG report ‘that is central to everything’ and must be answered. Start here:

1) Buried in the IG report is a line that poses an enormous question, one that is central to everything, and really must be answered.
Remember: According to all relevant players, prior to July of 2016, nobody had a Trump-Russia collusion narrative on their minds. ...(cont)
— Kimberley Strassel (@KimStrassel) December 12, 2019

The Fresno Bee wonders Devin Nunes lives on a congressman’s salary. How is he funding so many lawsuits?. Casts a lot of shade but eventually comes around to admitting they're probably on contingency.

On The Warpath from Just One Minute leads to, not exactly a neutral observer, but Glenn Greenwalt's favorite sock puppet has some powerful comments The Inspector General’s Report on 2016 FBI Spying Reveals a Scandal of Historic Magnitude: Not Only for the FBI but Also the U.S. Media


In this case, no rational person should allow standard partisan bickering to distort or hide this severe FBI corruption. The IG Report leaves no doubt about it. It’s brimming with proof of FBI subterfuge and deceit, all in service of persuading a FISA court of something that was not true: that U.S. citizen and former Trump campaign official Carter Page was an agent of the Russian government and therefore needed to have his communications surveilled.

From Da Hill Jonathon Turley wonders who will bother to issue An apology to Carter Page. Clearly not Comey and not Schiff.


At what point does someone apologize to Page? He is, in fact, the victim of this criminal referral. He is the victim of what Horowitz describes as a “misleading” basis presented to the FISA court. He is a victim of media “groupthink” that portrayed him as the sinister link proving collusion with Russia, an allegation rejected by the FBI, by the inspector general, and by the special counsel. Of course, Washington does not work this way. Page served his purpose and the trashing of his reputation was a cost of doing business with the federal government for many members of Congress and the media. In recalling the question by Donovan, there is no such office. Page is simply supposed to disappear and leave his reputation behind.

Chuck Ross, Will Hurd: ‘Media Was Lied To’ About FISA Abuse, Steele Dossier, to one of the great offenders, Jake Tapper. But they willingly swallowed and defended those lies long after they were debunked. The shame is on them. And, Crossfire Hurricane Team Didn’t Know About Steele’s Work For A Russian Oligarch, DOJ Report Says

And from Susan Jones at CNS News, something I hadn't heard before, DOJ IG: Peter Strzok Was Almost Removed From Crossfire Hurricane Case. Bill Priestap knew about his affair with Lisa Page and worried it might taint the investigation. It did.

At AmThink Leo Goldman tells What the IG Report Missed, and Where to Find It

The I.G. Report is not truthful in its description of the reasons behind opening the Crossfire Hurricane investigation. This might be not Horowitz's fault — his main sources were the Spygate perpetrators themselves. They were familiar with investigative techniques and thus coordinated their testimonies, inclusive of media leaks, accordingly.

The cyber-investigation is justified by a circular argument. The report simply repeats the allegations of "Russian infiltration," made by the DNC, CrowdStrike, and the DOJ in May–July 2016. Then it cites the so-called Intelligence Community Assessment of January 2017, the Mueller Report, and congressional proceedings, produced later and based on those initial DNC/DOJ claims and CrowdStrike data.


Of course, the headline CNN used, "Fact check: Trump says Democrats misquoted his call. He's correct," has a lot less vitriol than other CNN headlines like, "Lies, lies, lies: How Trump's fiction gets more dramatic over time." But at least they got the facts right this time. 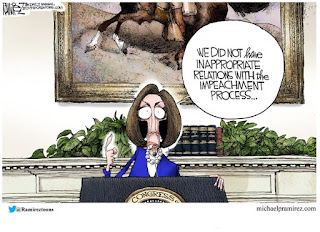 Small steps. And switching gears to impeachment follies, Nick Arama at Red State observes how Adam Schiff Finally Goes on Fox, Squirms Trying to Justify Impeachment. Video above. DML News, OpEd: Adam Schiff Rigged Impeachment Hearings by Hiding Exculpatory Evidence. Yep. At Breitbart, Nunes to Schiff: ‘It Is Clear You Are in Need of Rehabilitiation’ Or jail. Taylor Millard at Hot Air, Schiff, Nadler Might Disagree On Impeachment Conviction. Once they pass the articles, it really doesn't matter what they think. It may not matter now. At AmThink, Dan Sobieski outlines Nadler's Frightening Abuse of Power. PJ Media, [WATCH] Nadler Stuck on Elevator That Won't Close as Protesters Yell 'Shame On You! Trump 2020'

The Democratic drive to remove President Trump reached a milestone during the House Judiciary Committee's marathon hearing to approve two articles of impeachment. At some moment during that 14-hour session, it became abundantly clear that no one involved in the argument had anything new to say. In the absence of any original evidence or arguments, lawmakers on both sides simply said the same things they've been saying for the past two months, over and over and over.

Impeachment was ALWAYS a media effort that they bullied Democrats into doing even when Mueller failed to deliver goods. It BEGAN with editorial board support, it didn’t build to it. https://t.co/cL3ZaL63ty
— Mollie (@MZHemingway) December 15, 2019

Allah Pundit worries, Will Any Other Anti-Impeachment Dems Join Jeff Van Drew In Switching To The GOP This Week? as Da Wire reports Democrats Attack ‘Traitor’ ‘Rat’ Jeff Van Drew For Leaving Party, Staff Resigns and at WaFreeBe, Nadler on Party-Switching Dem: He’s Reacting to Polls. "Pol"iticians react to polls? Why, I never! As Politico whines that Conservative groups target their impeachment ‘Dirty 30’. Playing politics against us is no fair! But don't worry, if this doesn't work, we'll just impeach him again! WaFreeBe, Dem Rep: Trump Could Be Prosecuted in the Future.

Joe Herring at AmThink, The Democrats are engaged in a coup. What do we do about it? Hanging is too easy. At WaT, Rand Paul fears impeachment will 'dumb down and destroy the country' There's a lot of ruin in a nation, but we're a fair way down the road, I'm afraid. 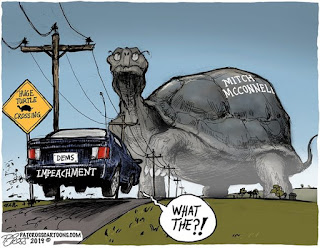 USNews Schumer Seeks Testimony From Mulvaney, Bolton in Expected Senate Trial of Trump .Ann Althouse, "I am clearly made up my mind. I'm not trying to hide the fact that I have disdain for the accusations in the process."


Said Lindsey Graham, on "Face the Nation" (transcript).
. . .
He's contrasting this impeachment to the Clinton impeachment, when Graham supported a long procedure in the Senate. His answer is that the way the House played its role was so inappropriate — such a "crock" — that the Senate shouldn't dignify it with a full scale trial. The House has changed impeachment — "weaponized" it — and the Senate ought to respond in a way that disciplines the House and restores the traditional order.

LI, Democrats Explode After McConnell Vows “Total Coordination” With White House on Impeachment Strategy You had you're rules in the House, now we get ours in the Senate. From sundance, John Ratcliffe Explains Why Corrupt Senators on SSCI Would Never Allow His Nomination – And Why a Senate Impeachment Trial is A Risk…

Linked by EBL in Hollywood for the Holidays 🎄🎁🤶🏻, Vintage Christmas 🎄🎁, Nancy and Her Giant Impeachment 🍑🤦🏻‍♀️, Eartha Kitt: Santa Baby 🤶🏾🎄☃️, Presidents of the United States: Peaches 🍑, Elf: Baby It's Cold Outside 🎄🎅🏻🎁🧝🏻‍♂️ and Joan Blondell Christmas 🎄🤶🎁
Posted by Fritz at 12:54 PM