So did anything exciting happen yesterday while I was out fishing the wind and rain? Not so much. The House Judiciary Committee voted on party lines to send the two articles of impeachment to the House, where presumably they will be voted on sometime next week. Sundance at CTH: Kangaroo Court – Chairman Nadler Stuns House Judiciary, Adjourns Hearing Without Notice – 10:00am Vote on Impeachment Friday…

This is how Democrats ended their impeachment hearing today on the House Judiciary Committee pic.twitter.com/oHm2xOrouy
— Ryan Saavedra (@RealSaavedra) December 13, 2019 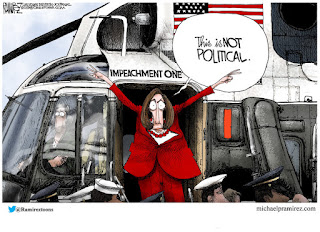 
With the party-line 23-to-17 vote, Trump became only the fourth president in U.S. history to face impeachment for “high crimes and misdemeanors.” The committee took just 10 minutes to approve both articles, following a 14-hour session Thursday, teeing up a history-making floor vote next week and a Senate trial in January to determine Trump’s fate.

Shorter McConnell. You have you're rules, we have ours. Erick Erickson, The Impeachment Problem for Never Trump, Anti-Trump, Democrat, and Progressive Alike is Quite Simple


When Democrats wanted to get Obamacare over the finish line in 2010, they had to rely on retiring members of Congress who no longer had to worry about pissing off voters. It is really striking here that there are 21 retiring Republicans, half of them are not real fans of the President, and a significant portion are leaving because their districts are rejecting the GOP because of Trump. But not a single one has been persuaded by the Democrats.

The people who hate the President and want him gone have internalized the claim that the President could kill a man on Fifth Avenue and the GOP would have his back. This is not actually true. All they need to do is talk to some of these retiring congressmen. But the Democrats are so convinced of this talking point they are not even trying to make a bipartisan case for impeachment.


Allah Pundit at Hot Air, Freshman Dem Who Led Impeachment Charge: Let Me Get Back To You Next Week On How I’m Going To Vote, Okay?


For cripes sake. On a day when other freshmen who are in tight electoral spots are showing their cards, Elissa Slotkin still can’t bring herself to whisper “Impeach,” as everyone knows she will eventually? 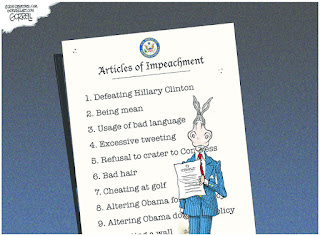 How much of Pelosi's money will it take?

From JJ Sefton's The Morning Report - 12/13/19 at Aces, SHAM-PEACHMENT FOLLIES 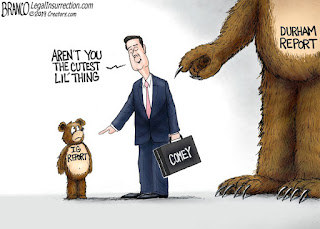 On "Spygate", Stacy McCain, Yes, Operation Crossfire Hurricane Was Wrong and Corrupt From the Start


The pretext the FBI used to spied on the Trump campaign was fraudulent — that’s the bottom line of the report Justice Department Inspector General Michael Horowitz delivered this week. Among other things, the IG’s report vindicated Republican Rep. Devin Nunes, who in February 2018 issued a memo detailing the many abuses involved in the FBI’s investigation of “Russian collusion.” After the Mueller report and now the IG report, we can say with certainty that (a) “collusion” was a paranoid fantasy manufactured by Trump’s enemies, and (b) the FBI’s reliance on Fusion GPS and the so-called “Steele dossier” was, at the very least, a mistake. At worst, it was a deliberate deceit, and I’m not in a mood to give the FBI the benefit of the doubt. Ed Morrissey at Hot Air finds the Washington Post‘s Aaron Blake attempting to spin the IG’s findings as favorably as possible to the FBI, and failing . . .


None of this is going to be new news to any of you, but the interesting thing is that leftwingers, and I think announced socialists, can admit these things, and yet supposed Holier-Than-Thou Brave Truth-Seeking Only-Adults-in-the-Room True Conservatives like David French and Jonah Goldberg continue lying about it. Video here. It's six minutes long and if you crank up the speed to 1.5, you can be done in less than five minutes.

Also, The Media Told You For Two Years That Everything About the FISA Was Perfect and Beautiful: The Supercut

John Sexton, Hot Air, The ‘Dossier Has Been Corroborated’ Supercut (Plus The FISA Warrant Supercut). Tom Maguire at Just One Minute, We Interrupt Comey's Victory Lap...


The music stopped, the cheers died down, and former FBI chief James Comey saw his victory lap come to an end.


Withering Criticism of F.B.I. as Watchdog Presents Russia Inquiry Findings
At a Senate Judiciary Committee hearing, the Justice Department’s inspector general recounted egregious problems with wiretap files.
While Democrats emphasized that the inspector general, Michael E. Horowitz, had debunked President Trump’s accusations that the F.B.I. conspired to overthrow his presidency, Mr. Horowitz insisted that his report was no exoneration, citing the serious errors, omissions and misleading statements he found in court wiretap filings.
“It doesn’t vindicate anybody at the F.B.I. who touched this, including the leadership,” Mr. Horowitz told members of the Senate Judiciary Committee. 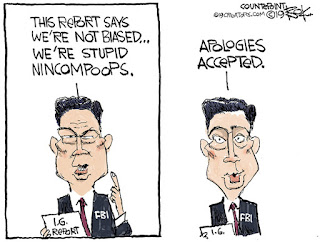 
WASHINGTON – Sen. John Kennedy (R-La.) is calling on President Trump to declassify the record of the FBI’s use of the Foreign Intelligence Surveillance Act (FISA) to surveil former campaign adviser Carter Page after the Justice Department’s inspector general found errors in the applications.

“The Inspector General report showed the FBI was willing to do anything in order to spy on Carter Page, including making 17 significant inaccuracies and omissions. The American public deserves to know everything the FBI did,” Kennedy said in a statement Friday.

“I’m asking President Trump to declassify the entire record so that Attorney General Barr and FBI Director Wray can release it to the American people. If the FBI wants to continue the employment of rogue, politically-motivated agents, then let the public read the entire record.” (read more)

Today is not soon enough.

Ace, Fusion Cofounders Glenn Simpson and Peter Frisch to the UK: The UK Needs Its Own Russian Collusion Conspiracy Theory and If You Pay Us Lots and Lots of Money We'll Cook You Up One That You Can Then Use To Get Warrants on Innocent Citizens.

And by the way, Christopher Steele already tried this, offering the UK an Exciting New Dossier claiming that everyone leftwingers don't like is a RUSSIAN AGENT.

I'm sure lefty outlets like the Guardian will pay for this -- and that's what this is about, right? Drumming up business?

These guys need to be stopped. The evidence of malice is overwhelming.

Linked at Pirate's Cove in the weekly Sorta Blogless Sunday Pinup and links.
Posted by Fritz at 9:54 AM