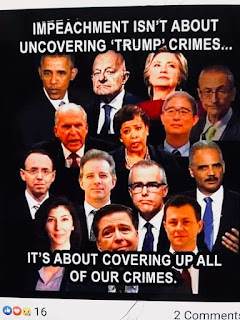 This appears to be the post-Christmas lull. Sundance at CTH has A MAGA-Dose of Common Sense on Trump Wiretapping… after reading Frank Watt at AmThink, who has Two Possibilities in Trump Wiretapping, and Neither Is Good


Based on what we are told by the I.G., there are only two possible conclusions that can be reached regarding the official conduct of those responsible for infringing on Carter Pages Constitutional freedoms:

The first is that the hand selected team of investigators, attorneys, and Senior Executive Service officials with decades of law enforcement, administrative, and judicial experience were abject failures at a task that they were hired to perform. Speaking from personal experience, in FBI, DEA, and state and local wire tap investigations, the slightest omissions, misstatements, and clerical errors are routinely identified and corrected by the street agents and line prosecutors who do these investigations for a living. To believe that a "varsity level" team, with unlimited time, support, and resources, somehow inadvertently overlooked seventeen major omissions, misstatements, and/or outright falsehoods, is simply not believable.

The second possibility is that nearly everyone who significantly participated in obtaining FISA coverage on Page knowingly and deliberately operated outside the law to one degree or another. The reasons behind the decision to do so are irrelevant. The particulars regarding the seventeen I.G. findings are startling, taken individually. It's difficult to see how any of the individual omissions or misstatements could have happened accidentally. Viewed collectively, the apparent intentionality is nearly impossible to reconcile as anything but corruption.

In light of the I.G findings, the presiding FISA court judge seems to have come down on the side of intentional abuse. In a recent court order, Judge Rosemary Collyer gave the FBI until January 10 to explain to the court why the FBI should be allowed to continue to utilize FISA. The statement that the FBI "withheld material information" and that "FBI personnel misled NSD" suggests that the judge isn't buying the "series of unfortunate events" excuse peddled by prominent figures in defense of the indefensible.
. . .
The author is a 1983 graduate of the U.S. Naval Academy. He served for over 22 years as an FBI special agent, supervisory special agent, and FBI SWAT team leader. 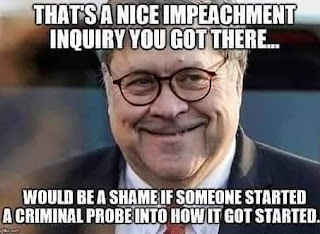 
Natasha Bertrand is the stenographer for Fusion-GPS smear activities with a reputation for egregious lying and narrative engineering. As a result it doesn’t come as a surprise to see Bertrand writing a collaborative article in Politico taking swipes on behalf of a thoroughly corrupted intelligence community.


If there’s nothing to see here, what are Sipher and McLaughlin so worried about? Durham has a good reputation as a straight-shooter. Why not let him run his investigation and follow it wherever it leads? Maybe he won’t find anything but if he does, shouldn’t we know about it? After all, the Horowitz investigation found that Nunes’ memo was basically correct about the FISA application while the Schiff counter-memo was wrong.

Richard Fernandez, The Death of Privacy and the Curse of Secret Investigations


The FBI had pursued an investigation of a presidential campaign on the basis of a dossier bought and paid for by the rival candidate with incalculable results: "This is the FBI’s darkest hour." The most disquieting aspect of the whole affair was pointed out by the NY Post editorial board. Could more abuses have been committed against the general public? If the FBI could fabricate pretexts against prominent individuals who could afford the best lawyers, how safe were ordinary individuals from the secret inquisitors?

The Last Tradition,  Tom Fitton: Inspector General was ‘Late to the Game’ on Probing

At Was Ex, Jason Foster, a long time aide to Sen. Grassley lays out The lies and distortions by the hatchet men at Fusion GPS. And, of course, a couple from Ace, Noted Adulterer John McCain Was Christopher Steele's Cut-Out/Messenger-Bitch to the FBI,After Christopher Steele Was Fired and Cut Off From the FBI for Lying and Washington Post Columnist Rips Rachel Maddow for Promoting Steele Dossier Conspiracy Theories for Three Years


But he doesn't mention the Washington Post "journalists" and "experts" who pushed the same conspiracy theories.

But then, journalists are cowards. It is to be expected.


What Maddow never expected, of course, was that there would be a detailed official investigation of the Steele dossier’s role in manufacturing the “Russian collusion” hoax, and now that Justice Department Inspector General Michael Horowitz has done that investigation, Maddow’s dishonesty is fully exposed. She has nowhere to hide — her deceptions are a matter of record, preserved on video — so that even the Washington Post cannot pretend she still has any credibility.
. . .
Professor William Jacobson remarks: “Alex Jones is deplatformed, while Maddow still remains atop the MSNBC heap. Some conspiracy fear-mongers are more equal than others.” So it seems.

On shampeachment, Jazz Shaw at Hot Air notes Schumer’s Handling Of Clinton’s Impeachment Was Very Different. Hypocrisy from a politician? Why, I never . . . From Breitbart, David Perdue: A ‘Couple’ Senate Democrats Might Vote to Acquit Trump. But I thought all the Democrats were being non-biased jurors, and waiting to see the trial! Byron York at WaEx points out No, the Senate is not a jury, and other misconceptions about impeachment. Twitchy, ‘Who says she even WANTS a trial?’ Kimberley Strassel drops a big ol’ truth-bomb on Nancy Pelosi’s impeachment stunt


Fox News reports Nancy Pelosi's move to withhold from the Senate articles of impeachment against President Trump is stunning because the House speaker "has no leverage," said Brad Blakeman, who served as deputy assistant to President George W. Bush.

Blakeman, an adviser in the Bush-Cheney 2000 Presidential campaign, made the comment on “Fox & Friends” Thursday morning.

“[Senate Majority Leader] Mitch McConnell did not nose his way into the impeachment process in the House and she has no standing to do that in the Senate,” he said.

At Breitbart, Dem Rep. Cohen on Impeachment House Managers: ‘Speaker Pelosi Is Looking at a Demographic Mix’. It will work if they get enough gay lesbian and transgender Aleut Polynesians on the team. Really.

Conrad Black at AmGreat, Democrats Must Live with Consequences of Their Foolish Impeachment Farce


The voters will exercise their right and duty to determine if they want to reelect Donald Trump. The Democrats started late, after years of huffing and puffing. They failed to impress anyone, came up empty, produced and passed a pack of lies as an argument for impeachment. Now they are trying to assert constitutional rights they do not possess and a moral authority they squandered years ago to deprive the Senate of the control over an impeachment trial which the Constitution clearly reserves to the upper chamber.

It’s over, Madam Speaker. Go back to San Francisco and ask Santa’s elves to help you clean up the public sanitation problem of the homeless people the California Democratic miracle has put on the city’s sidewalks.

Linked at Pirate's Cove in the weekly Sorta Blogless Sunday Pinup and links.
Posted by Fritz at 9:49 AM