Seems like we're really just treading water, waiting for the New Year with new developments. Adam Mill at Am Great is Revisiting Rosenstein’s Cover-up of Crossfire Hurricane. It's worth reviewing, if only for the sense of all the crap that's gone down in the last 3 years, and Rosenstein's role in it, but I'm still willing to give Rosenstein the benefit of the doubt. I think he was the graphite moderator in the Crossfire Hurricane reactor, trying to damp it down, largely for institutional reasons, not so much to save Trump. An optimist, Adriana Cohen at the Register Mail thinks Comey’s cabal is going down.


Let’s not forget that Democrats like House Speaker Nancy Pelosi, Rep. Adam Schiff and others like to remind us when assailing the president that “no one is above the law.”

Does that exclude underlings at the DOJ?

Perhaps Loretta Lynch, Obama’s attorney general — and Comey’s boss while this corruption and election meddling was happening — can explain why Flynn and Roger Stone are going to jail but not all the FBI and DOJ officials who deceived the FISC.

It doesn’t go unnoticed that Lynch and Obama have been radio silent as all this unfolds.

Dexter Wright at AmThink reminds us that the FBI isn't eternal. Before there was an FBI there was the U.S. Marshals Service. He wants to decapitate the FBI, and roll the field agents into the Marshals Service. I like it, as a temporary fix, but in truth, law enforcement power will always be corruptible. It's our job to guard against that. 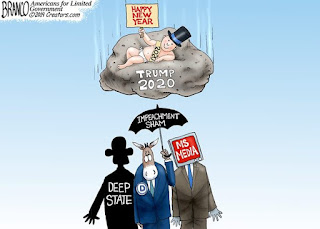 Michael van der Galien at PJ Media thinks Rep. Gaetz Destroys Rep. Schiff: 'He Should Be Removed as House Intelligence Chairman'. Sure he's a lying SOB, but unfortunately he has served his party well, so far, so he won't be. If schift goes badly after the impeachment, maybe he will. Robert at Small Dead Animals wonders When Will Rachel Maddow Be Fired? Again, probably never. See my comments immediately above regarding Adam Schiff. Breitbart, Pollak: Media, Tech Self-Censorship over ‘Whistleblower’ Marks Death of Free Press in United States

Whoda thunk crack and hookers were so expensive? The IRS Placed Lien On Hunter Biden For About $113,000 In Unpaid Taxes From Year He Served On Burisma Board (Da Caller) and a thread unrolled,  The parallels between Hunter Biden and Paul Pelosi are absolutely eerie.


The woman Paul Pelosi has business dealings with involving a single room occupancy hotel known as “the pit” is now accusing him of forcing her to have an abortion and weaponizing child protective services. 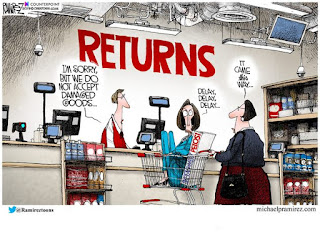 Speaking of Slow Joe, Althouse catches the Dersh  saying "Democratic candidate presidential and former vice president Joe Biden... is right in saying that he would refuse to comply with a Senate subpoena absent a court order."


"In making that statement, however, Biden has now taken the legs out from under the second article of impeachment voted on by the House against President Trump. That article accuses the president of 'obstruction of Congress' for doing essentially what Biden said he would do, namely demanding a court order before he would comply with what he believes to be partisan subpoenas issued by one chamber of Congress.... If Biden is not obstructing the Senate by his refusal to comply with a Senate subpoena, how could Trump be guilty of obstructing Congress by refusing to comply with the House subpoenas absent court orders? The shoe is now on the other foot and causing blisters for Democrats. It could also be uncomfortable for Republicans, who may have to acknowledge that Biden has a point."

Which may explain why Biden 'Clarifies' Vow to Obstruct Congress, Claims 'No Legal Basis' to Testify About His Quid Pro Quo With Ukraine (Matt Margolis, PJ Media) and Biden Backtracks In Iowa, Now Says He’d Obey Subpoena To Testify (Karen Townsend, Hot Air). The latter is exactly what Trump is being impeached for; insisting on a court decision before allowing aides to testify.


"Rehnquist, for whom Roberts clerked in the 1980s, once mused that during Clinton’s proceeding he 'did nothing in particular, and did it very well,' lifting a line from Gilbert and Sullivan. Eric Claeys, a law professor at George Mason University and former Rehnquist clerk, said Rehnquist’s approach was framed by the 1986 rules. The rules say the presiding officer 'may rule' on all questions of evidence, like instances where the relevance and significance of a document or witness testimony is unclear. However, a single senator can appeal the ruling, triggering a Senate vote, where some say Roberts would break a 50-50 tie, though that is disputed. The presiding officer also has the option to stay mum on an evidentiary question and send it directly to the Senate for an up-or-down vote. Rehnquist generally avoided this option during Clinton’s 1999 impeachment trial, Claeys said. Instead, Rehnquist applied the relevant precedents, then left it up to senators to decide whether to reverse his decision. 'I don’t think that Chief Justice Roberts will play a bigger role in President Trump’s impeachment trial than Chief Justice Rehnquist did in President Clinton’s,' Claeys said. 'I expect Roberts will follow the same strategy.' However, some legal experts believe today’s more intensely partisan atmosphere may force Roberts to depart from the course charted by his predecessor...."

From "Trump impeachment trial drags Roberts into spotlight" by John Kruzel (in The Hill).

Start talking about impeaching a president 19 minutes after he is inaugurated, go on talking about it at every opportunity, regardless of whether there are any grounds to deploy this most serious of political rebukes. Could a Standing Committee on Impeachment do any better?

More, Via Ace Scalise: Pelosi Attempting Her Own "Quid Pro Quo" in Impeach Delay, Murkowski is "Disturbed," All Right, Herbert Marcuse and the Democrats' Impeachment, Flashback: Democrats Coordinated With Clinton White House During Impeachment, Revealing the Real Cause of Deep State Corruption
Posted by Fritz at 10:12 AM