Been a busy week hasn't it, between the Horowitz Report and testimony, and the on going House Impeachment nonsense?

WND reports on how Tucker Carlson showed that the IG report documents how CNN repeatedly lied, along with a number of people at the FBI, DOJ, MSNBC, CBS, NPR etc, etc, while at Town Hall Katie Pavlich finds  how Trey Gowdy Details the Most Important Parts of the IG Report and Gives Advice to James Comey "Don't write any more ethics books."

Capt. Ed at Hot Air catches the WaPoo trying to gently back out of their previous coverage of the Nunes/Schiff Memeo affair while justifying it; WaPo: Say, About That Schiff Rebuttal To The Nunes Memo …


How does that stack up now? The Washington Post’s Aaron Blake rereads both memos and concludes that Nunes turned out to be closer to the truth than most credited at the time:


The Fix annotated the Nunes memo back in early 2018. We also wrote skeptically about some of the GOP arguments based on it, many of which are not backed up by Horowitz’s report.
But how much is the Nunes memo itself vindicated? A fair amount, it turns out — at least, in Horowitz’s estimation.

That’s an odd qualifier. Whose estimation matters more at this point? Horowitz conducted a full IG probe into these matters and has documentary and testimonial evidence of how the FBI conducted Operation Crossfire Hurricane. The only person who might get more information than Horowitz would be John Durham, whose criminal investigation will have more jurisdiction, scope, and depth than an IG review has, but what Horowitz has found is well documented.

And Blake makes clear that Schiff’s claims in rebuttal to Nunes get pretty much demolished by Horowitz, with perhaps one caveat. Schiff claimed that the FISA warrant applications on Page “met the rigor, transparency, and evidentiary basis needed to meet probable cause requirement,” which Blake calls “the worst line of the Democrats’ rebuttal.” 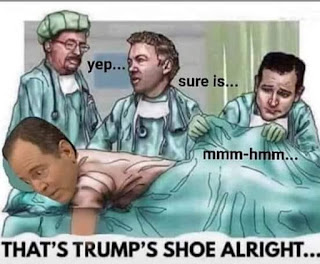 At Power Line, Scott Johnson wonders about After Horowitz


Whatever the limitations of the Department of Justice Inspector General report on FISA abuse and related issues, it should bring some closure to the Russia hoax touted by the Democrats and their media adjunct over the past three years. If there is to be a reckoning with the deceit and dishonesty that have pervaded our public discourse on matters related to the hoax, however, we are on our own. The Democrats and their media adjunct are still at it. I mean this to be the first in a series of posts that follows up on the DoJ IG report submitted by Michael Horowitz this week.

From the Stream Bombshell: Strzok and Page Changed Flynn’s Interview Answers. Not new, really, but it does raise the issue of the Fynn "sentencing" which has been held in abeyance in anticipation of the Horowitz report. Did Sidney Powell get enough out of it to get his conviction tossed? I certainly hope so.

At Hot Air, Capt. Ed ruminates Should We Dump FISA — And Put Congress In Charge Of Surveillance Oversight? No. In fact Hell No! Congress is inherently the most corrupt institution in the United States. I do have a suggestion though. The FISA process is inherently unbalanced. If the govt. lawyers attempt to convince a FISA judge that a US person is the agent of a foreign power, there is no opposition, no representation of that person's side. The system need an office of ombudsman, for lack of a better word, a group of lawyers whose job is to investigate, and defend the target of proposed FISA warrant before the judge. 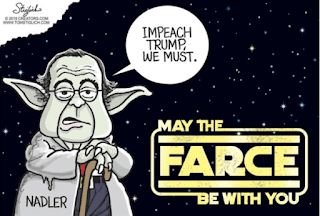 
House Judiciary Committee Chairman Jerry Nadler (D-NY) offered a bizarre justification Thursday for ignoring House rules requiring him to allow Republicans to call witnesses: it did not say he had to do so on a particular day.

at WUWT, Trump Impeachment – Because he Insulted Climate Brat Greta Thunberg?. Come on, let's make it the third count!  From Da Hill Douglas Mackinnon, Is a trap being set for Trump in the Senate trial?


Can 20 U.S. senators withstand the potentially irresistible temptation to reverse the results of the 2016 election and remove a president a number of them openly or privately dislike?
. . .
There appears to be a common thread that runs through all of this opposition and stated hatred: “He is not part of the club. He is not one of us. He can’t be controlled.”

Kurt Bardella at USA Today whines that Democrats brought a gavel to an impeachment gun fight. Trump's 2020 rivals must do better and the LA Time reports Scuffles break out in Glendale as Rep. Adam Schiff speaks at town hall


As Schiff began speaking, a man and two women held up signs reading,"Don’t Impeach.” When they were asked to take down the signs, they refused.

Then, about a dozen people scattered throughout the auditorium began yelling, “Liar.”

When some in the audience asked them to refrain from yelling, scuffles broke out throughout the room, and the audience members who were yelling at Schiff removed their jackets, revealing shirts supporting President Trump. 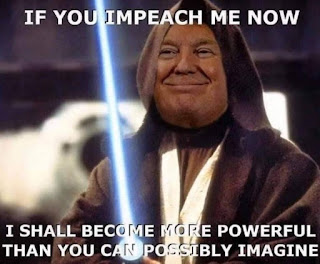 Dr. John at Flopping Aces, We are now in the midst of a coup, not just of Trump, but of America. Yep. At the National Interest, Why Boris Johnson’s Victory and Impeachment Could Augur a Trump Triumph in 2020.


Jeff Van Drew is a democrat congressman from New Jersey CD-02. According to multiple media reports he is likely to switch to the republican party next week due to the fraudulent impeachment effort. Van Drew was one of two democrats who did not support the vote for the impeachment inquiry.

According to Politico Democrat leadership are in a panic and urgently trying to get ahold of Van Drew. The optics of a democrat changing parties at the same time they are trying to sell the validity of an impeachment narrative are terrible.

But, Allah Pundit at Hot Air reports, Falling In Line: Two Freshmen Dems From Red Districts In Texas Say They’ll Support Impeachment, risking becoming one-termers. Meanwhile, as Axios reports, Scoop: House Dems attend Trump's holiday party amid impeachment. A little awkward maybe, but impeachment is no reason to pass up free booze! Althouse, "I have a problem with this whole damn place. If you can figure out an exit strategy for me I’d appreciate that. This is crazy. The whole thing is crazy. It will take some time to get over." "Ken Buck, a Republican congressman from Colorado (and member of the Judiciary Committee), quoted in "Icy silence, frayed connections: Impeachment takes a toll" (AP)."


Politico’s Jack Shafer has eloquently argued that the press should name the whistleblower. It is not against the law — whistleblower protections are to prevent retaliation in the workplace and apply to his superiors, not the media. Yet while the press eagerly tried to out Deep Throat or the anonymous author of “A Warning,” they suddenly lack curiosity.

They’ve also been hypocritical. In September, the Times reported the whistleblower was a male CIA officer who worked at the White House and was now back at the CIA. Why? Executive editor Dean Baquet said, “We wanted to provide information to readers that allows them to make their own judgments about whether or not he is credible.” A cynic might say they were trying to argue that the whistleblower was credible.

But if that’s the argument, and if Ciaramella is the whistleblower, isn’t it also relevant that he, according to Sperry, previously worked with CIA Director John Brennan, a fierce critic of Trump, and Vice President Joe Biden, Trump’s political opponent and the crux of the impeachment inquiry? That he’s a registered Democrat and that he was — again, according to Sperry — accused of leaking negative information about the Trump administration and that’s why he was transferred back to Langley?

What, if anything, did he leak? Did he work with Biden on Ukraine, apparently Ciaramella’s area of expertise? Did he know about Burisma and Hunter Biden? Who told him about the call, and why did that person not complain instead of him? How did Schiff’s staff help him tailor the complaint?

This is only the fourth time in our history that a president has faced impeachment. Shouldn’t we know the answers to these questions now, and not in two or three years when the inevitable official reports and tell-all books come out? Why must we wait for the truth? 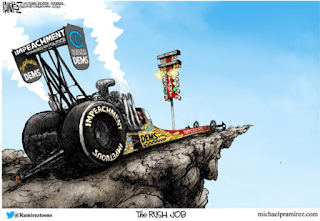 From Paul Bedard WaEx, Hidden by impeachment: One of Trump’s 'best weeks yet'


Plus, advisers noted, Wall Street hit another record, and Pelosi conceded that on impeachment, "It’s been going on 22 months — two and a half years, actually."

And, the advisers added, with impeachment likely, the president was assured by McConnell that the Senate would move fast on a trial that will end in acquittal and might include the support of two Senate Democrats, according to Sen. Rand Paul.

Cartoons via Power Line's, The Week in Pictures, Impeachment Edition just a few of many.
Posted by Fritz at 10:09 AM