Russiagate: The Four Professors of the Impeachment Apocalypse

Yesterday the four professors, three chosen by Democrats Pam Karlan, Noah Feldman and Michael Gerhardt, and one allowed by the Democrats, Jonathan Turley, spoke at  and were questioned by members of the committee and their staff, because, as Eddie Scarey wrote at NYPo, Impeachment hearing: Nothing is more convincing than liberal professors yelling at you.  Capt. Ed at Hot Air, Collins: Come On, This Useless Judiciary Hearing Is Just A “Rubber Stamp” For Schiff. Matt Margolis at PJ Media, AWKWARD: Jerry Nadler Dozes Off During Impeachment Hearing. Ann Althouse, I thought the law professors would give a very somber, neutral-seeming presentation of what they would characterize as law. She was disappointed,


I am surprised that they spoke so severely and stridently and launched right into stating conclusions, applying the law to the facts, and expressing these conclusions in a tone I'm used to seeing in the movies, where hammy actors argue to a jury.

and later, she wrote In the complicated emotional manipulation that was yesterday's lawprof hearing, one almost random thing stuck way out.


I can only guess what goes on in other people's head. It was hard enough for me as a law professor to understand how much law students were getting out of a discussion, and those were carefully selected participants who were supposed to have read a text that was exactly what we were talking about. But what did Americans get out of yesterday's hearing before the House Judiciary Committee, where professors jabbered all day, prodded by posturing politicos professors?
. . .
So who am I to guess at what was going on inside 100 or so million heads? What, if anything, got from that hearing into the mind of the voter? Maybe mostly just a vague sense of reinforcement in whatever level of hostility or support they already felt for Donald Trump. But I think there was one thing that rose about the chaotic verbiage: The Child!

Referring of course to  Dr Karlans injudicious invocation of Barron Trump's name. But first, from Sundance, Professor Jonathan Turley Opening Statement – Video and Transcript…. If you haven't you should watch it. Turley did a pretty good job of making the points that you can be anti-Trump and anti-impeachment; that this impeachment is being rushed, and that there is actually very little that can be pointed to as an actual crime. John Sexton at Hot Air, Jonathan Turley: ‘This Is Not How You Impeach An American President’ yet. The Lid, aka Jeff Dunetz,  Jonathan Turley Destroys Dems Fast-Track Trump Impeachment, Charge By Charge.  Breitbart,  Turley: Under Democrats’ ‘Abuse of Power’ Standard, Obama Could Have Been Impeached. Tyler O'Neil at PJ Media, WATCH: Law Prof DESTROYS Democrat Claim That Trump's Ukraine Call Was 'Bribery'


"It's a dangerous thing to take a crime like bribery and apply a boundless interpretation," the law professor warned. "These crimes have meaning."

"You can’t accuse a president of bribery and then, when some of us note that the Supreme Court has rejected your type of boundless interpretation, say, 'Well it’s just impeachment. We really don’t have to prove the elements.' That’s a favored mantra," he explained.

"This isn’t improvisational jazz. Close enough is not good enough," Turley quipped. "If you’re going to accuse a president of bribery, you need to make it stick — because you’re trying to remove a duly-elected president of the United States."

Twitchy, ‘It’s YOUR abuse of power’: Jonathan Turley wallops Dems with a HEAVY dose of self-awareness

Turley flips the Dem argument on impeachment on its head:

"If you impeach a president, if you make a high crime and misdemeanor out of going to the courts, it is an abuse of power. It’s your abuse of power. You’re doing exactly what you’re criticizing the president of doing." pic.twitter.com/j32p5vXuWI
— The First (@TheFirstonTV) December 4, 2019

All three Democrat witnesses agreed that Trump should be impeached over nearly everything, and some things that hadn't been thought of. yet. Of the Democrats, Dem Witness: If You Don’t Impeach Trump, Democracy Is Dead, Or Something. (Capt. Ed). But then, the witness, Noah Feldman was on record as wanting to impeach Trump over mean tweets a few weeks in March 2017.


House Judiciary Committee Democrats led their hearing this morning with Harvard’s Noah Feldman. Later in the day under intense questioning by Rep. Matthew Gaetz (R-Flor.), Feldman claimed he “was an impeachment skeptic before July 25.”
That’s a flat-out misrepresentation by Feldman of his views because he was among the early advocates of impeachment, beginning March 7, 2017, barely six weeks after President Donald Trump’s inauguration. See three more examples in 2017 and 2018 of Feldman clearly pushing impeachment of Trump: here, here and here.

But the most interesting moment came when Prof. Karlan decided to use a child to make her argument that American Presidents are not kings. Da Wire, Democrat Impeachment Witness Pamela Karlan Takes A Shot At Barron Trump

Never mind that one is "Baron" and the other is "Barron". Even if the AP doesn't get the difference, Allah Pundit does, Dem Witness On Presidential Power: Trump Can Name His Son “Barron” But He Can’t Make Him A Baron; Update: Karlan Apologizes

Classless move by a Democratic “witness”. Prof Karlan uses a teenage boy who has nothing to do with this joke of a hearing (and deserves privacy) as a punchline. And what’s worse, it’s met by laughter in the hearing room. What is being done to this country is no laughing matter.
— Stephanie Grisham (@PressSec) December 4, 2019

A minor child deserves privacy and should be kept out of politics. Pamela Karlan, you should be ashamed of your very angry and obviously biased public pandering, and using a child to do it.
— Melania Trump (@FLOTUS) December 4, 2019

and as noted by Allah in his update, Karlan did issue an non-apology apology later in the session, when it had become clear that the comment had backfired badly.

Pamela Karlan: "I want to apologize for what I said earlier about the president's son. It was wrong of me to do that. I wish the president would apologize, obviously, for the things that he's done that's wrong, but I do regret having said that." pic.twitter.com/7lYiRWCKjw
— CSPAN (@cspan) December 4, 2019

Professor Karlan is so upset about Trump that she has to cross the street to avoid walking in front of the Trump hotel in Washington, DC, but she is a dispassionate professor:

Professor who testified today in favor of Trump impeachment says that she has to cross the street when walking past a building with Trump’s name on it pic.twitter.com/V9w2USSC2P
— Reagan Battalion (@ReaganBattalion) December 4, 2019


What's outrageous is that they got all of this and they're still flailing about. That they can get the phone records and everything else and cannot penetrate the voters or a GOP wall, but are instead losing their own members over impeachment, is just another reminder this should be settled at the ballot box, not in the Senate. 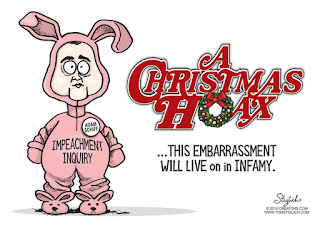 
Take me: I am almost reflexively pro-impeachment. The presidency is too large and too powerful. The only way to hack it back down to something approaching its constitutional limits is to impeach and remove a president from office and thereby set an example for successors. And yet, as I was reading this report, I kept muttering things like, “Really? That’s the best you could do? Amateurs!”

It was never really meant to, just a check mark on the road to impeachment. Impeachment, a how too guide

538 does the math and finds The Impeachment Hearings Just Confirmed Voters’ Preexisting Opinions, while the Victory Girls peer Down the Democratic Rabbit Hole of Impeachment. 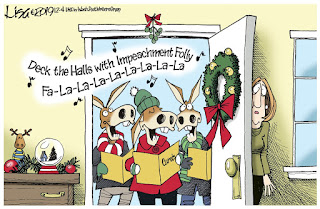 From the Blaze, Joe Biden admits his willingness to commit an impeachable offense, Joe Biden says he will refuse to testify in Senate impeachment trial if called

From Capt. Ed. McConnell’s Warning Shot: Senate Dems Better Cooperate In Impeachment Rules, Or Else. If you can have your silly rules, we can have ours.