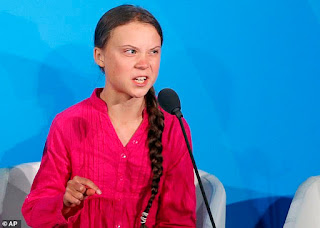 
A few weeks ago, Rod Dreher speculated that Maximilien Robespierre, the French radical who ruled during the infamous Reign of Terror, could have been autistic. The evidence Dreher offered was perhaps not conclusive, but I have little expertise in autism so am not qualified to judge. However, it’s been reported that the teenage Swedish climate-change fanatic Greta Thunberg is autistic, and she certainly has the totalitarian tendencies that would remind one of Robespierre:


. . .In an op-ed published in Project Syndicate, Thunberg and two other far-left climate activists attacked world leaders over their pro-capitalist policies, writing that “the politicians let the profiteers continue to exploit our planet’s resources and destroy its ecosystems in a quest for quick cash that threatens our very existence.” . . .
“My message is that we’ll be watching you. This is all wrong, I shouldn’t be up here, I should be back in school on the other side of the ocean,” Thunberg began. “Yet, you all come to us young people for hope. How dare you. You have stolen my dreams and my childhood with your empty words, and yet I’m one of the lucky ones. People are suffering; people are dying. Entire ecosystems are collapsing. We are in the beginning of a mass extinction, and all you can talk about is money and fairytales of eternal economic growth.” 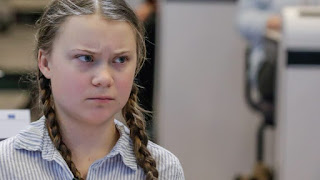 
After all, the climate crisis is not just about the environment. It is a crisis of human rights, of justice, and of political will. Colonial, racist, and patriarchal systems of oppression have created and fueled it. We need to dismantle them all. Our political leaders can no longer shirk their responsibilities. . . .
As the science makes clear, we don’t have a single day to lose. . . .
Each and every one of us must participate in the climate resistance movement. We cannot just say we care; we must show it.

Notice the words “need” and “must” here? Notice also the word “crisis.” This is a rhetorical tactic beloved by totalitarians. The problem with which they are obsessed is always a crisis, which demands immediate action — “we don’t have a single day to lose” — and anyone who doesn’t share their sense of dire urgency is dismissed as morally inferior: “We cannot just say we care; we must show it.” In other words, you must either show that you care about this issue as much as young Greta does, by doing whatever it is she demands that you do, or else you are to be classified among the untermenschen, subhuman, without any merit or value. You either join her in the work of dismantling “systems of oppression” or you are Lebensunwertes Leben — “life unworthy of life,” as the Nazis described those whom they targeted for eradication. 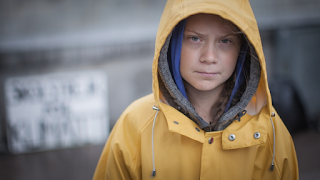 I don't really want to focus on Greta's learning disability, the way Stacy does. That just makes it easier to for the folks controlling her to manipulate her.

I'd rather focus on the fact that these rants reveal the "watermelon environmentalism" (green on the outside, red on the inside) driving the movement. The  rants reveal that which most of us know. The climate juggernaut is not about saving the planet from warming (they might think of that as a side benefit, if they really believe in it at all), but rather to encourage the establishment of a socialist state, with complete control over the economy.

Which is really rather strange when you think about it, because socialist countries, China, Vietnam, Venezuela, the old Soviet Union, are notoriously bad environmentally. The people in charge may actually have the power to impose total regulation in such a way as to control greenhouse gas emissions, as well as other environmental nightmares, but they rarely, if ever, do so instead, focusing their efforts on controlling the populace and goosing their industries, which are routinely failing due to lack of incentives.
Posted by Fritz at 10:30 AM