. . .in 2019, and a surprisingly robust showing in the mainline Russiagate. At WaT, Rowan Scarborough reminds us how Two government investigations leave Steele dossier in shambles. Neither the Mueller report or the IG Horowitz report were all that anyone desired, but together, they certainly debunked the Steele Dossier. At JWR, Understanding Dems' March Toward Electoral Defeat fromTucker Carlson and Neil Patel. As Scott Johnson at Power Line puts it, We now know: Perps & their accomplices

The top two leaders of the FBI were closely involved in this fiasco. Other powerful people knew what was happening and lied to cover it up. That all was confirmed by the IG report. The report was a disaster for the credibility of top leaders in Barack Obama’s FBI, and it’s also a big problem for the American news media.

And speaking of Perps, Les Stihl at AmThink considers  Comey's FBI vs. the FISA Court


FISA policies are only as good as the people implementing them, and it looks as if for some time now the people in charge have acted irresponsibly if not with bias or even illegality. Perhaps the latter is why we are beginning to see announcements like this one from the American Center for Law and Justice: “Right now, we're engaged in a major lawsuit against the Deep State FBI. We've already forced the FBI to agree to turn over thousands of emails between Comey's circle of corruption about spies placed in the White House.”

Stu Cvrk at Red State offers a Comey Tweet Decoder, while through the WaPoo, Comey whines about  The four stages of being attacked by Donald Trump. When you strike at a King . . .

But yesterday was an unusually warm day in Washington DC, and two snakes slithered out of their lairs. Via Gateway Pundit a Defiant Lisa Page Insists “There Was No Insurance Policy” – Twitter Users Respond, it was all just a misunderstanding, why are you Trumpsters so paranoid? And the head snake, Peter Strzok Argues in Court His First Amendment Rights Were Violated… (Sundance at CTH), while Roscoe Davis demolishes his claims in a twitter thread In documents filed today, Strzok claims that the FBI and Justice Department violated his rights of free speech and privacy by firing him for text messages that criticized President Trump.

Obviously Pete and Lisa are getting the same legal advice. Two things though no right to privacy on a Gov't issued phone. No First Amendment rights on Gov.t issued phones when on duty. And part of being in the FBI you can be fired for inappropriate conduct both on and off duty.
— Roscoe B Davis🎖⭐️⭐️⭐️ (@RoscoeBDavis1) December 31, 2019

Ratcliffe says he has seen the documents that indicate that Comey and Brennan were running an op BEFORE the opening of Crossfire Hurricane.
h/t @JarradKushner pic.twitter.com/W1LAHpTNrh
— OK BOOMER⚙️HAPPY NEW YEAR[4K] (@BOOMER4K) December 21, 2019

Libby Vaughn at Red State lets Dan Bongino Explain Why the Unmaskings Left Little or No Paper Trail. Because the CIA was involved. Granite Grok is wondering Why Was it Okay to Ask Foreign Nations to ‘Investigate’ a Political Opponent When Obama Did it? Because, reasons! There! At AmThink Leo Goldstein holds forth on how The Russia Hoax Was Aided by NGOs Peddling Junk Science

At Town Hall, Katie reports on ICYMI: An FBI Analyst Is Going to Prison for Illegal Email Hacking of a Political Enemy...to Protect Mueller. Just a good Democrat sacrificing himself for the common good.

On the whistle-blower front, good news as Judicial Watch Sues DOJ and CIA for Documents on Eric Ciaramella (Breitbart) while Betsy McCaughey  at NYPo explains Why Adam Schiff doesn’t want anyone talking to the whistleblower and Front Page Mag in a  deep dive takes A Close Look at Adam Schiff. 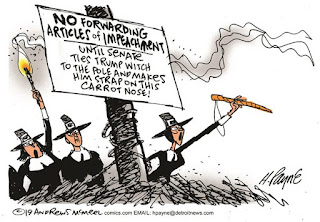 
"After the House voted in favor of the articles of impeachment, do you realize there were people who thought that this meant that trump was no longer president?

"It's true. Where I live, they actually had a celebratory protest at the usual location where all of the other 'F* Trump' protests were held, and these idiots were jumping up and down, tooting little horns, and waving signs that proclaimed how great it was that the Bad Orange Man was finally gone.

"And this is a college town. Which should be full of smart people, or so they keep telling us, what with all of the perfessers and academic geniuses and gender studies majors boosting our collective IQ up into the stratosphere.

"So with all of our rocket scientists, you'd think that at least some of them would have taken a basic civics class in high school, so they would know at least something about the impeachment process.

"But no, apparently nobody around here has. And *we're* supposed to be the ones who are dumb.

while the boys at the Bulwark try to explain How Impeachment Trials Work "Clearing up misconceptions about what will happen in the Senate now that Trump has been impeached." The fact is nobody know. Impeachments are rare, and constitutional guidance is sketchy at best. Everybody is making up the rules as they go along. It's Calvin Ball with big stakes. From sundance, Former House Oversight Chairman Trey Gowdy Discusses Impeachment Outlook…


A federal judge in Washington, D.C. dismissed a lawsuit Monday that sought to determine whether a witness had to obey a subpoena from the impeachment inquiry after Democrats withdrew the subpoena and impeached Trump anyway.

U.S. District Court Judge Richard Leon decided Monday that the suit filed by Charles Kupperman, a former aide to former National Security Advisor John Bolton, was moot because the subpoena had already been withdrawn. The House Intelligence Committee had sought to compel Kupperman’s testimony as part of its inquiry into President Donald Trump’s dealings with Ukraine, alleging he withheld U.S. aid in return for investigations into former Vice President Joe Biden, who at the time was leading polls to win the Democratic Party’s 2020 presidential nomination. 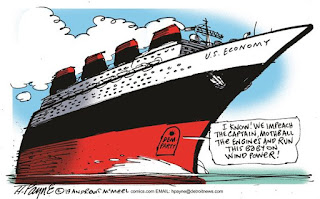 
Bandy Lee says that Pelosi has not done enough, especially now that we are in the impeachment process. While Lee thinks it has been effective for Pelosi to withhold the articles of impeachment instead of delivering them to the Senate, she thinks Trump is becoming more dangerous. Trump’s six-page letter to Pelosi after the votes on the articles of impeachment seems to be the breaking point for Lee. She now advises Pelosi to do something drastic, like call 911 and report Trump as a danger to the country. Yes, really.


“As a coworker, she has the right to have him submit to an involuntary evaluation, but she has not,” Lee told Salon. “Anyone can call 911 to report someone who seems dangerous, and family members are the most typical ones to do so. But so can coworkers, and even passersby on the street. The law dictates who can determine right to treatment, or civil commitment, and in all 50 U.S. states this includes a psychiatrist.
“The advantage of a coworker starting this process is that a court can mandate a mental capacity evaluation before the dangerous person returns to work,” Lee continued. “The committing physician is preferably the patient’s treater, but does not have to be.”

Just the visual of some unhinged Democrat picking up the phone and calling 911 to report President Trump as a danger to the community and the nation, in general, is comedy gold. It would make a perfect SNL skit, wouldn’t it? This kind of suggestion makes me wonder who is the person in mental distress? It sounds like it is her.

A very Stalinist tactic.
Posted by Fritz at 9:33 AM