Give This Day Our Daily Russiagate

Getting back to normal after the Christmas lull. Michael van der Galien at PJ Media shares the news that British Ex-Spy Christopher Steele Shared More Anti-Trump Fake Conspiracy Theories With the FBI

The Washington Times explains that "The three allegations had to do with supposed Trump campaign cash from Moscow via Azerbaijan, a Russian intelligence officer, and a purported intervention by Russian President Vladimir Putin on the next secretary of state."

Steele provided the FBI with the name of a Russian intelligence officer who was supposedly Carter Page's handler. If true, this would -- of course -- lend credence to another claim Steele made about bribes in return for relief from U.S. sanctions for Russia.

However, the FBI admitted to Horowitz that "Steele's allegations about the Russian national were investigated, but no information was uncovered to substantiate the allegations." Of course, we all know now that Page was actually a source for the CIA.

And from where did these marvelous, unverifiable accusations emanate? Russians? No, the Hillary campaign. 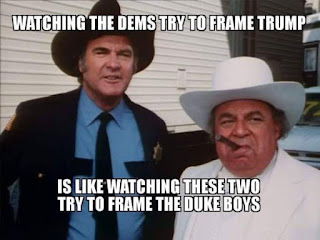 Remember right now when these supposed anti-conspiracy-theorists attempt to deny all facts they don't like by calling them "conspiracy theories"?

And yet... they sure do love a conspiracy theory that affirms their prior political biases.

Also from Ace, Media-Democrat Ruling Class Continues Pushing Disproven Russia Conspiracy Theories To Explain Away Everything They Don't Like, Including... People Who Don't Like Disney Star Wars

According the the @nytimes, over half the online anger directed at #LastJedi came from Russian sock puppet accounts.

Their mission is to divide us. Movies, games, politics, doesn’t matter - and we are easy targets. https://t.co/nzZ2vAduhH
— Brianna Wu (@BriannaWu) December 26, 2019


The case against Maddow is far stronger. When small bits of news arose in favor of the dossier, the franchise MSNBC host pumped air into them. At least some of her many fans surely came away from her broadcasts thinking the dossier was a serious piece of investigative research, not the flimflam, quick-twitch game of telephone outlined in the Horowitz report. She seemed to be rooting for the document.

And when large bits of news arose against the dossier, Maddow found other topics more compelling.

She was there for the bunkings, absent for the debunkings — a pattern of misleading and dishonest asymmetry. 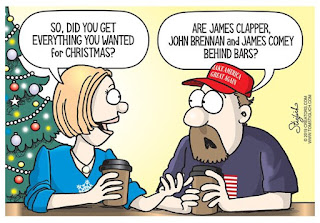 Sundance at CTH, Wemple Skewers Maddow Over Dossier, Gullible Audience Jaw Agape w/ Denial, Dissonant Journalists Reap What They Sowed…. Reap what they sow? If they really reaped what they sow, the would be in jail for fraud, or at least fired for dishonest journalism. It won't hurt their bottom line a lick.

Clown or co-conspirator, sundance is rethinking Treehouse Perspectives on Carter Page…. I'm still inclined to give Page the benefit of the doubt, although his association with the CIA leaves room for discussion. Also from sundance, DOJ Requests One Week Delay for Second Flynn Sentencing Brief…


According to the filing, the DOJ is seeking a one week delay, from Dec 30th to January 6th, in order to gather more material for a new sentencing memorandum. Due to Flynn’s non-cooperation, it is anticipated the DOJ will enhance the prior memo from December 2018 and ask for a more severe sentence.

In their sentencing memo of December 2018 the DOJ (Mueller ongoing) did not request prison time, arguing for a sentence “at the low end of the guidance range.”

However, with AG Bill Barr and U.S. Attorney Jessie Liu; and given the events over the past year, including 6(e) grand jury information; there is a possibility the DOJ will now request a much more harsh sentence to include time in prison.

WTF? With so much evidence of FBI and DOJ misconduct in the case, Sidney Powell should file to revoke his guilty plea and try the case. I'd love to see Strzok, Pientka, Comey and McCabe called as witnesses. Apropos, Adam Mill, Da Fed, If The FBI’s Contempt For The Law Is Not Reined In, Its Abuses Will Get Worse


For so long, we’ve waited for an Obama administration insider who was willing to speak the truth. The topic of the unprecedented unmaskings attributed to Samantha Powers and Susan Rice has come up often enough, but has always been dismissed. Up until now, there’s has been very little known about it. With his firsthand and technical knowledge, it is clear that Mike Rogers’ cooperation with the Durham Team will do much to clarify the “why” of it all and will help to fill in many of the blanks.

My guess is that as a whistle-blower, Rogers won't be treated as well by the MSM as Eric Ciaramella, who, by the way, was indirectly mentioned by Trump in a tweet yesterday. Mediatite, Trump Retweets Article Which Names Alleged Whistleblower. Speaking of bogus whistle-blowers, Michael Avenatti was $15 million in debt when he extorted Nike: prosecutors (NYDN).

Tyler O'Neil at PJ Media, Trump Goes Nuclear on Dem 'Liars!' for Deeming Him Security Threat ... Then Delaying Impeachment. I hope "goes nuclear" is a figure of speech, because Trump really does have his finger near the button. 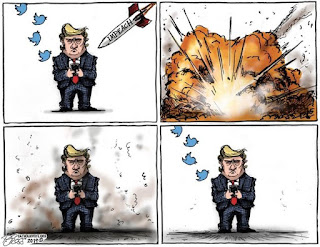 Yahoo! Trump Senate Impeachment Trial Finds Scant Precedent in History. Well, yes, it hasn't happened often, and the Congress gets to make up the rules as they go along. But in 20 years, the annual attempt at impeachment will be formalized into a ceremony, ala the Gormenghast saga.

According to Karen Townsend at Hot Air, the Beeb wishes America a Merry Impeachment, Not Merry Christmas, America. Yeah, well, before too long you'll be stuck with King Charles, you assholes. Andy Pudzer (really?) at Da Fed warns Why Democrats Will Never End The Impeachment Show Until Trump Is Gone For Good, but Neo writes If I were one of those House Democrats in a Trump-friendly district who had been talked into voting against my better judgment for Trump’s impeachment… "…I’d be hopping mad right about now."


To Pelosi and the leftist wing of the party: You made me put my seat at grave risk for this? And then you shelve the whole thing for an indeterminate time and a foggy reason?

I’m not at all sure how many members of Congress match my description. Originally there were said to be 31 such Democrats in the House who come from districts that voted for Trump and yet elected a Democrat – usually one who promised to be moderate and relatively independent – in 2018. One of them, Jeff Van Drew, voted against impeachment and has become a Republican since the brouhaha. Another, Collin Peterson, voted against impeachment as well.

The 29 others voted for impeachment. Of course, some of them may have felt that impeachment was justified and needed no pressure to vote that way. But I would bet (without knowing) that most of the 29 felt they were signing their own political death warrants, and did so reluctantly.

Or maybe not so reluctantly. Maybe they are already sick of Washington. Maybe they were promised good jobs from other Democrats if they get turned out of the House in 2020 as a result of their vote. But I bet a lot of them are spitting mad right now and feeling as though they walked into a trap. 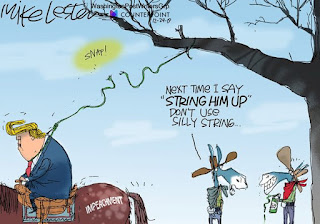 Ace, to Jeff Flake, True Conservative and Former Host of Game Show Who's Inside My Wife?: The Trump Impeachment Trial Is a Trial of All Republicans, Too


You mean what if Barack Obama were guilty of authorizing, and then seeking to hide his authorization of, an illegal CIA/FBI surveillance operation targeting a politician of the opposite party threatening to undo his legacy?

I mean, he is guilty of that.

Oh wait, Jeffy, that's not what you mean, is it?

Via the Wombat's In The Mailbox: 12.25.19, Weasel Zippers: Dershowitz Says Senate Doesn’t Need to Wait On House Before Doing Impeachment Trial. I thought of it first. Just take the articles of impeachment off the internet.
Posted by Fritz at 10:29 AM