Russiagate, While I Wait

. . . for the coffee to cool a bit. So, you may remember that sometime before the Horowitz Report broke, both the prosecution and the defense in the Flynn case asked for and were granted a stay from sentencing pending the release of the Horowitz material. Yesterday, Flynn judge crushes hopes for tossing guilty plea, says ex-national security adviser waived constitutional rights, and I guess once you do that you can never get them back. Ace's JJ Sefton links Da Caller with Clinton-Appointed Hack-in-Black Judge Sets Michael Flynn Sentencing For Jan. 28, Rejects Entrapment Allegations. Sundance, at CTH has the actual ruling at  Judge Sullivan Denies Flynn Motion for Brady Material, Schedules Sentencing for January 28th…., and more analyis at AG Bill Barr Chooses to Protect Rosenstein Over Full Disclosure in Flynn Case…


AG Bill Barr doesn’t need a court order to provide the truth.  Currently the prosecution of Michael Flynn is directly under Bill Barr’s authority.  Heck, the President of the United States has authorized Bill Barr to declassify any/all material that may be needed in the honest search or truth and justice.  And Bill Barr has done absolutely nothing. From Rich Lowry at NR, The Slippery James Comey Gets Nailed "based on his performance with Chris Wallace, it’s safe to doubt the reliability of James Comey’s definition of “vindicated.” EBL, James Comey Interviewed by Chris Wallace 🔥🤯🔥 "Comey comes off as a lying partisan poser, because he is one." Lloyd Billingsgley at Front Page, Comey's Fake Confession

Althouse, "I have complete confidence in Mr. Wray, and I know that the F.B.I. is not a broken institution. It is a professional agency worthy of respect and support. The derision and aspersions are dangerous and unwarranted."

From Zero Hedge, Can We Impeach The FBI Now?, Authored by Peter van Buren via TheAmericanConservative.com,


The release of Justice Department Inspector General Michael Horowitz’s report, which shows that the Democrats, media, and FBI lied about not interfering in an election, will be a historian’s marker for how a decent nation fooled itself into self-harm. Forget about foreigners influencing our elections; it was us.

The Horowitz Report is being played by the media for its conclusion: that the FBI’s intel op run against the Trump campaign was not politically motivated and thus “legal.” 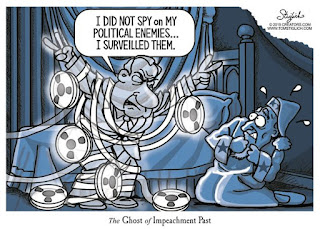 Beth Bauman at Town Hall says Shifty Schiff Tries to Play Dumb: The IG Report Revealed Things We Had No Idea About Two Years Ago. We knew them, you just denied them. Capt. Ed at Hot Air, Schiff: Hey, How Could I Know That The FBI’s FISA Applications Were So Bad? You might have taken your fingers out of your ears and stopped shouting "guilty!" over and over. Margot Cleveland at Da Fed, IG Report Proves Schiff-for-Brains Has Been Lying About Spygate Since the Beginning

Sharyl Attkisson at ET, William Barr Has Suddenly Become Chatty—and He’s Provided Quite an Information Dump, with a list of  "24 points Barr felt the need to make after the release of the Horowitz report. (All of the information is attributed to Barr.)"


1. Don’t expect Durham’s findings to be announced before late spring or summer 2020.

2. The FBI did spy on the Trump campaign. That’s what electronic surveillance is.

3. Regarding the FBI’s actions in surveilling Trump campaign associates, it was a “travesty” and there were “many abuses.”

4. From “day one,” the FBI investigation generated exculpatory information (tending to point to the targets’ innocence) and nothing that corroborated Russia collusion.

5. It’s a “big deal” to use U.S. law enforcement and intelligence resources to investigate the opposing political party, and I cannot think of another recent instance in which this happened. . . .


Will Chamberlain at Human Events, William Barr: Man of the Year. Meawhile at the WaPoo signals that it's time to start tearing down John Durhman in anticipation of it's findings with John Durham has a stellar reputation for investigating corruption. Some fear his work for Barr could tarnish it.

Julie Kelly at AmGreat, Never-Trump Conservatives Started the Smear Campaign on Carter Page and JB Shurk Our Russia Collusion Nightmare: All Hillary's Fault? I think it goes all the way up to Obma.  Allen West, CNS New, The New American Stasi. According to Phil D'Agostino It's not a coup. It's a civil war.

Breitbart, Dossier Author Worked with Obama Admin to Cultivate Putin Sources  and they admit it themselves!

In the corruption watch, Reuters admits Clinton's charity confirms Qatar's $1 million gift while she was at State Dept "even though she had promised to let the agency review new or significantly increased support from foreign governments." RCP, Biden's Son Cashed In On VP Being Point Man For Obama In Ukraine And China

And just because this one has been sitting in the bin a couple of days looking for an opening, from Da Wire, Scandal Reopens? Court Papers On Democrat IT Aide Imran Awan Make New Revelation

And just too much impeachment stuff to go through. We know they're gonna do it. We don't exactly know the number of Democrats they'll get but it will be enough: 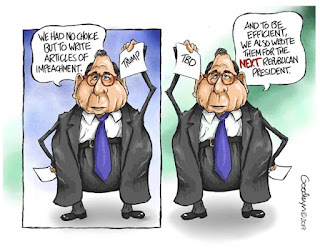 Another Democrat Bashes Impeachment Process, Will Vote Against, Predicts 4-5 More Will Join Him

Is Pelosi going to end up losing only two votes on impeachment?

It Is Not on Republicans to Make This Impeachment Bipartisan
New idea: Democrats should impeach Trump but then withhold the articles instead of sending them to the Senate

Althouse: "In the wake of combative impeachment hearings, those surveyed oppose by 51%-45% a Senate vote to convict Trump on charges of abuse of power and obstruction of Congress."

The Art of Impeachment: Why I Still Just See A Banana Taped To A Wall – JONATHAN TURLEY

Levin: Every president would be subject to impeachment under Dems' current articles - YouTube

Video: This morning's Elissa Slotkin town hall on impeachment sure was ... spirited

Schiff: I hope to hell I'd vote to impeach Obama if he did what Trump has done

The Case for a (Partially) Secret Senate Trial - The Atlantic

Rudy Giuliani: "I needed Yovanovitch out of the way" - Axios

Democrats Vow To Continue Impeachment Investigations Regardless Of Senate Outcome

Schemer's Hail Mary Bid to Save Dems' Disastrous Impeachment Drive
Schemer: Hunter Biden Would Be a "Distraction" in Impeachment Trial...

...Wants Mulvaney, Bolton to Testify in Senate Impeachment Trial (he's not in a position to get a friggin' thing - jjs)

Chief Justice Roberts May Decide the Next Election

Mario A. Duarte: Chronicle of an Impeachment Foretold - How the Left's Weaponization of Bureaucracy Has Its Roots in Latin America
Posted by Fritz at 8:58 AM