Should I give up on the Russiagate titles, just because we know that Russia really didn't have anything to do with it? 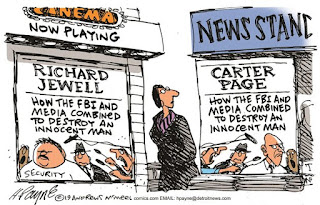 Running a little late today, thanks to breakfast out. Before we head into the impeachment bullcrap, there's been a little progress in the Spygate sector. According to Ace, the NYT is reporting Durham Investigating John Brennan's Calls and Records to Find Contradictions In His Claims? "John Durham might be pawing through John Brennan's email, call, and other records to find out if he lied/contradicted claims made to the public or on the record to Congress."

Wouldn't that be Ironic Justice?

As well as, you know, regular justice.

Moreover, according to AG William Barr, Durham Is Also Looking into ‘Private Actors’ Involved in Russia Hoax, via Nice Deb at AmGreat.

Christopher Steele authored the completely discredited anti-Trump dossier that “played a central and essential role in the FBI’s and Department’s decision to seek the FISA order,” according to Justice Department Inspector General Michael Horowitz’s report on the Trump-Russia investigation.

Fusion GPS co-Founder Glenn Simpson, who hired Steele, was commissioned by the Hillary Clinton campaign and Democrats to gather dirt on the Trump campaign. The two then peddled their unverified work product all over Washington to journalists, the FBI, the State Department and the Department of Justice.

Left out of the IG report were the names Cody Shearer and Sidney Blumenthal, Clinton-connected henchmen who created their own dossier that may have served as a template for Steele’s. Durham may be looking into their involvement in the Russia hoax, as well.

Barr also took issue with former FBI director James Comey's claim that he wasn't responsible for the Operation Crossfire Hurricane mistakes because it occurred "seven layers" below him.


When asked if he believed Comey’s assertion, the attorney general flatly answered, “no.” Barr said: “The idea that this was seven layers below him is simply not true.”

He added: “I think that one of the problems with what happened was precisely that they pulled the investigation up to the executive floors, and it was run and birddogged by a very small group of very high level officials.”


On a Thursday podcast hosted by Stewart Baker, a partner at the Washington office of Steptoe & Johnson LLP, the blog’s founder, Bobby Chesney admitted that the damming report from the DOJ IG documenting FBI abuses and vindicating the infamous Nunes memo on the discredited Steele Dossier alleging Russian collusion has been destructive to his publication’s reputation.
. . .
I feel like all of us, who, you might call us the ‘Lawfare crowd’ who were often denounced or criticized at least in the older days as being too quick to credit and too trust the good faith and completeness of the efforts of the FBI in this kind of context. A lot of us look bad right now and we’re sort of watching anxiously to see how the broader OIG investigation sheds light on whether this was a one-off problem or a broader problem but there’s not question that a lot of our positions don’t look as persuasive as a result of how this has turned out.

As Ace notes, in Lawfare Blog Owner: The Horowitz Report Really Embarrasses Us and Hurts Our Credibility "Very few of these liars are admitting such things" as he notes some that still aren't. Patti Stockman at AmThink details DOJ’s High Crimes and Misdemeanors in the prosecution of her husband, former Rep. Steve Stockman, whose main offense appears to have been opposing Obama programs too vigorously. And at PJ Media VDH  details how Former Intelligence Chiefs Fit Perfectly Into Media Advocacy Culture

Via the Wombat's In The Mailbox: 12.19.19, American Greatness: Nunes Says FBI Director Wray’s Lies About FISA Abuse Memo Hurt The GOP In The Midterms and The Geller Report: Husband Of House Judiciary Democrat Paid $700K By Ukrainian Oligarch. 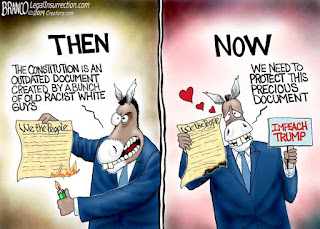 It's Official: House Dems Close Up Shop Without Sending Articles of Impeachment to Senate (Tyler O'Neil Pj Media.Sean Davis and Mollie Hemingway have 6 Reasons Palsi Pelosi's Senate Obstruction Gambit on Impeachment Articles is a Disaster "1) After impeaching Trump for supposed obstruction of House, Pelosi moves to obstruct the Senate" Impeach Her! 2) After denying Trump any due process, Pelosi is now denying him a speedy trial. 3) Pelosi has no leverage, 4) Pelosi’s obstruction gambit shows her own lack of confidence in Schiff’s work product, 5) Refusing to transmit impeachment articles undercuts Democrats’ claim that Trump is an “urgent threat” to America, 6) Democrats continue to destroy norms and institutions while claiming Trump is the real norm destroyer. 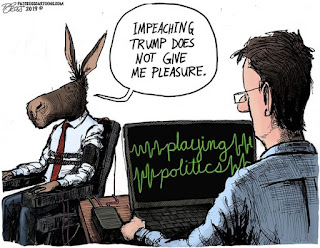 Alhouse, Impeaching Trump and then not following through with what you did? What idiotic bumbling!


Don't start what you don't know how to finish. What a spectacle of incompetence!

And then they slink off for their Christmas vacation. Thanks for the tidings of comfort and joy.

Joseph Klein at Front Page, The Ins and Outs of Delaying a Senate Impeachment Trial "What the Dems are up to -- and what the Constitution says about it." From Allah Pundit at Hot Air, Trump’s Lawyers Wonder: If Pelosi Never Delivers The Articles Of Impeachment, Does That Mean He’s Not Really Impeached? , hey, the job's not done until all the paperwork is, and then weirdly enough, from Katie Pavlich at Town Hall, Oops! Leftist Law Professor Who Testified for Democrats: Actually, Trump Isn't Impeached Yet. Hey, he's their authority. Noah Feldman at Bloomberg, Trump Isn’t Impeached Until the House Tells the Senate According to the Constitution, impeachment is a process, not a vote.  Matthew Walther at Da Week, The Trump drama is about to get a whole lot weirder. That seems difficult, but I'm sure they can pull it off. Sundance at CTH, Senate Leader Mitch McConnell: “The House Conduct Has Damaged The Institutions of American Government” – Video and Transcript… If you're up for a 30 minute harangue from Mitch:


The arcane rules, phony cordiality and debates over the second sentence in paragraph G of Point Six were bad enough, but the nausea meter hit the roof when Nancy Pelosi took the microphone. Wearing a funereal black dress, she stood next to a cardboard American flag and recited the Pledge of Allegiance.

I would have counted her more honest if she had pledged her allegiance to a Democratic donkey.

Michael Stern USA Today, I wanted Trump impeached on Day One and I'm not sorry. He was unfit from the start. News Busters, CNN Host Doesn't Object as Top Dem (James Clyburn) Shocks: ‘Give’ Trump a ‘Fair Trial and Hang Him’. Ace, Democrat Operatives at the Washington Post Tweet Out "Merry Impeachmas," Then Lie and Claim They Were Just Celebrating the Day of Christ's Birth

Washington Post celebrating the impeachment of their biggest political opponent. An impeachment that they worked so hard to achieve over several years. pic.twitter.com/IYVpzT2cCP
— Mollie (@MZHemingway) December 19, 2019

Sundance, Senator Lindsey Graham: “I just met with the President, he is mad as hell and demanding his day in court”…, while at NR, Kevin Williamson notes Conservatives Are Having the Same Old Arguments over Trump. Why would they change now? They're conservative!

Plenty more impeachment links at the Wombat's In The Mailbox: 12.19.19, JJ Sefton's The Morning Report - 12/20/19 at Aces, and Larwyn's Linx: Former intelligence chiefs fit perfectly into media advocacy culture
Posted by Fritz at 11:37 AM