The Strzok and the Page show: From the Mongkey Cage at WaPO, By Casey Burgat and Charles Hunt: Why was the Peter Strzok hearing such a circus? Because Congress wanted it that way. From William Saleten at Slate: It’s the embattled FBI agent, not the president, who models American values. It’s Undeniable: Trump Is Blessed With Really Stupid Enemies by Kurt Schlichter at Town Hall:

Despite the best efforts of borderline mental defectives like Ted Lieu and whoever that dork was who wanted to give Strzok a Purple Heart, this paragon of the establishment came off to Normals as exactly who he is – a skeevy bureaucrat who delights in jamming up other people with the rules he ignores. The FBI Motto is “Fidelity, Bravery, Integrity,” and that married serial sexting hack blew two of those just by cavorting with his gal pal. He and his establishment supporters somehow think Normals aren’t going to figure out that if his wife can’t trust him not to nail the chick at the next desk, we can’t trust his explanation for why he didn’t nail the woman with classified material all over her emails who was supposed to be the next president.

One of the secrets of Trump’s success is having really, really stupid enemies, enemies who are so tone-deaf and out-of-touch that they simply cannot adopt commonsense positions that resonate among normal Americans. The establishment instead insists on telling Americans that up is down, black is white, and girls can have penises. Nope. . . .


“In many cases, she admits that the text messages mean exactly what they say, as opposed to Agent Strzok, who thinks that we’ve all misinterpreted his own words on any text message that might be negative,” Rep. John Ratcliff told reporters. Rep. Steve King found Page “certainly more cooperative” than Peter Strzok, who texted Page that “we’ll stop” Trump from becoming president. Rep. Mark Meadows told reporters “Lisa Page today and again on Friday demonstrated a transparency that we didn’t see from Peter Strzok.” The Freedom Caucus chairman, a strong critic of the FBI and DOJ, remained more guarded than some of his colleagues.

Texas Republican Louie Gohmert, one of Strzok’s harshest critics, told Fox News “She has given us more insights to who was involved in what.” Page had been “more cooperative,” and Gohmert indicated that former CIA boss John Brennan and Director of National Intelligence James Clapper could have been involved, along with other FBI supervisors Gohmert did not name.

David Corn on Russia Probe: ‘FBI Prosecutors All Have Political Leanings’ IN theory FBI are not prosecutors at all, rather just investigators, but we know what you mean. Adam Credo at the Free Beacon: Intel Chair: FBI, DOJ Obstructing Trump Probe in Hope of Dem Takeover in Congress
Nunes says DOJ, FBI betting on Dems killing probe. Ace: Nunes Unchained: DOJ and FBI Have Bet All Of Their Chips on Democrats Winning the House, Which Will End Investigations Into Their Misbehavior; 90% of Reporters "Essentially an Arm of the Democrat Party". Sure seems like it. And speaking of slow-walking investigations,  Freedom Caucus lawmakers call on DOJ to probe Rosenstein allegations

"This notion Mr. Rosenstein threatened to use his official investigative powers as Deputy Attorney General to retaliate against rank-and-file staff members for sending written oversight requests raises concerns he has abused his authority in the context of this investigation," they wrote in their letter to DOJ Inspector General Michael Horowitz.

News reports had indicated Rosenstein planned to call on the House general counsel to conduct an internal investigation on congressional staffers' "conduct" this week.

Paul Sperry, RealClear Investigations Mueller All but Ignores the Other Russian Hack Target: the GOP. Of course, it runs counter to the narrative of the Russians aiming to elect Trump

“RNC emails were stolen through the same spearphishing scams used against Democrats,” a senior U.S. intelligence official familiar with the investigation told RealClearInvestigations. “In fact, prominent Republicans were targeted and similarly victimized by the disclosure of sensitive emails during the campaign.”

The indictment acknowledges this on page 13: “The Conspirators also released documents they had stolen in other spearphishing operations, including those they had conducted in 2015 that collected emails from individuals affiliated with the Republican Party.”

But that is the only mention of Russian attacks against Republicans in the 29-page indictment that focuses on the targeting and victimization of key Democrats, including the chairman of the Clinton campaign, John Podesta, as well as Democratic institutions, such as the DNC and the Democratic Congressional Campaign Committee.

Time:  Vladimir Putin Set a Trap for Robert Mueller in His Press Conference with Donald Trump


Reporters in Moscow usually hear the same brush-off a few times a week: Send us your request in writing, and we’ll deal with it as we see fit. But when President Vladimir Putin urged Special Counsel Robert Mueller to “send a formal and official request to us” about the indictment he brought on Friday, it was not the lazy reflex of a Russian bureaucrat who doesn’t want to answer questions. It was a calculated attempt to pull the Mueller investigation onto a playing field that Putin can control.

Here’s roughly how the Russian leader would like things to unfold: Now that the Special Counsel has indicted a group of 12 Russian intelligence officers for interfering in the U.S. elections, Putin wants to see the evidence, ideally translated into Russian and sent to the authorities in Moscow, all in accordance with an obscure law-enforcement treaty that the U.S. and Russia signed nearly two decades ago.

Russian investigators would then take the evidence, question the accused and send Mueller back a report, which he can go and stick right up his file cabinet. This, at least, is the roadmap Putin laid out during his press conference on Monday with President Donald Trump, who referred to it as an “incredible offer.”

I still think Putin should order Potemkin to turn himself in, and then await document discovery.

Via Wombat-socho's "In The Mailbox: 07.16.18" Weasel Zippers: DNC Perez Dodges When Asked Why He Won’t Allow FBI To Access DNC Servers

And via Wombat-socho's "In The Mailbox: 07.17.18", Twitchy: Fact-Checking The Fact-Checkers – Byron York Looks Into Trump’s Claim About DNC Servers. Because they have a lot of criminal activities to hide.

Much media debunking of Trump DNC server comments. Politifact says 'False'; Politico says 'unmoored from reality.' But DNC did not, in fact, turn over server(s), no? Maybe that's unimportant; yes, there's other evidence. But did DNC hand over servers or not? From Comey 3/20/17: pic.twitter.com/X04ZhmUNsb
— Byron York (@ByronYork) July 17, 2018

FOUR COINCIDENCES: FISA Abuse and Unanswered Questions About the DNC Server By Jeff Carlson at Director Blue. Read the whole thing. It will make you angry.

Jack Goldsmith at Lawfare: Uncomfortable Questions in the Wake of Russia Indictment 2.0 and Trump’s Press Conference With Putin. Read the whole thing.


But behind the indictment, and the congratulatory reaction to it, lie some uncomfortable unanswered questions about blowback toward U.S. officials, reciprocal interference by the United States in other nations' political affairs, the lack of preparation for renewed electoral interference in this country, and U.S. journalists’ publication of stolen U.S. government information. These questions have heightened significance and more difficult answers in light of President Trump’s astounding performance Monday in Helsinki.

A 33-year-old lawyer – who cites modeling and acting as hobbies and is said to be a native of Caserta, Italy – Mangiante Papadopoulos indicated she would pay her own way to travel to Washington, D.C. from Chicago, where she and her husband reside, to overcome a snag over the reimbursement of her travel expenses. Plans for her testimony were momentarily derailed when, she said, she was told by the committee's minority that Republicans would not cover the costs of witness transportation. 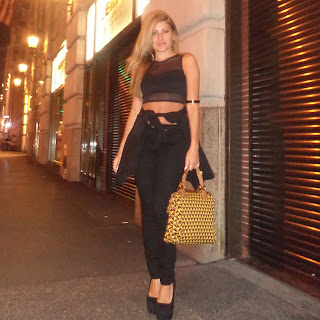 Democrats on the committee have vowed to continue interviewing witnesses as part of their own investigation into Russia's interference in the 2016 election, though Republicans unilaterally announced a conclusion to the probe months ago. The majority's final report said the investigation yielded no evidence of collusion between the Russia and the Trump campaign.

And a whole host at Larwyn's Linx: John Brennan’s Role.

Wombat-socho has "Rule 5 Sunday: Alexa Davalos" working, but the FMJRA post is conspicuously absent at The Other McCain.
Posted by Fritz at 10:22 AM