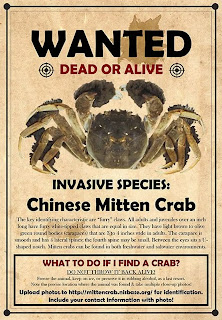 The Chinese Mitten Crab: Smithsonian wants you to look out for this invasive crab species

Environmental scientists are urging people to report (and kill) the Chinese mitten crab, an invasive species that has been spotted in Delmarva waters and nationwide.

While not a new problem, public reports of the hairy crustacean tapered off over the years, prompting the Smithsonian Environmental Research Center to launch a campaign encouraging people, particularly crabbers and fishermen, to be vigilant while out on the water.

Part of the center's campaign launch includes a free T-shirt for the first 10 people who report the mitten crab to Smithsonian.

"We are begging people to please not release (the mitten crab)," said Katherine Newcomer, a researcher at the center's Marine Invasions Lab, adding that it is illegal to import, export, sell, acquire or purchase the crabs under the U.S. Lacey Act. Individuals could be hit with a $100,000 misdemeanor fine if caught. 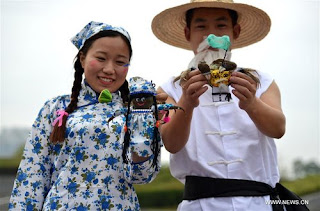 Brianna Tracy, another researcher with that lab, said the center received a specimen two weeks ago that they have since verified is a Chinese mitten crab.
. . .
Are the little invasive crustaceans edible?

The Marine Invasions Lab gets that question a lot, Tracy said in an email. While Chinese mitten crabs are a delicacy in Asian countries, they are also known to inhabit polluted waters and are able to take heavy metals like mercury and lead into their tissue, as well as other forms of contamination, according to Smithsonian.

The best precaution before consuming is to know the source of the crab, according to Smithsonian.

The fact that the adults tend to seek out freshwater environments, which are often more polluted, makes them suspect.

I'll have to ask my friend who runs the invasions lab at SERC where the new find was.
Posted by Fritz at 9:25 PM