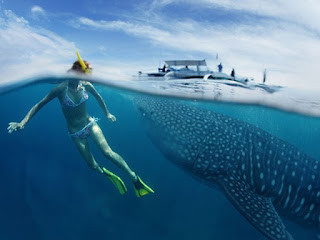 Whale sharks are bigger than had been thought and can live 130 years, study finds

Whale sharks, the largest of the shark species, can travel the ocean for up to 130 years and can grow as long as 61.7 feet, a study found.

The study, published online this month in the Marine and Freshwater Research Journal, followed free-swimming sharks who returned to the same area every one to two years in the South Ari Atoll, Maldives over 10 years. 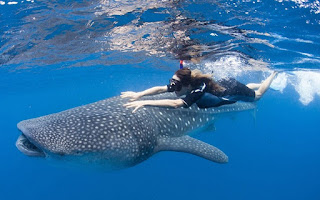 The researchers wrote that at 61.7 feet on average, the sharks are “longer and bigger than previously believed.” The measurements were based on 186 encounters with 44 sharks that were measured visually and with laser and tape. Previously, whale sharks were generally believed to be 40 feet long or more.

“What makes this a novel approach is that we took repeated noninvasive underwater measurements of live sharks over the course of a decade,” said Cameron Perry, one of the study’s authors and a former graduate student at NSU in Davie.

“Up to now, such aging and growth research has required obtaining vertebrae from dead whale sharks and counting growth rings, analogous to counting tree rings, to determine age,” Perry said. “Our work shows that we can obtain age and growth information without relying on dead sharks captured in fisheries. That is a big deal.” 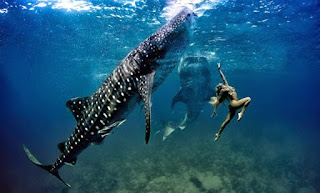 Back when I was a post-doc, in 1986, I did a cruise on the R.V. Knorr out of Woods Hole. One nice day out in the the Atlantic Ocean, a Whale Shark slowly rose out of the depths beside the ship. I swear it looked 100 ft long. Extremely impressive!

I'm surprised that no one has harpooned or snagged a big one before to see how large they really are; it would be a very human thing to do.

Wombat-socho has "Rule 5 Tuesday Weld" ready and waiting.
Posted by Fritz at 6:00 AM