A comet that could become visible to the naked eye in August has just exploded in brightness. Amateur astronomer Michael Jäger‎ of Austria reports that Comet PANSTARRS (C/2017 S3) brightened 16-fold during the late hours of July 2nd, abruptly increasing in magnitude from +12 to +9. He took this picture of the comet’s expanding green atmosphere shortly after the outburst: 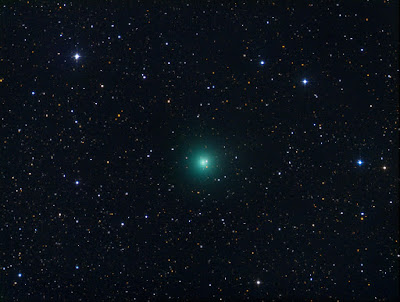 “The gas cloud around the comet’s nucleus is about 4 arc minutes wide,” says Jäger‎. That means the comet’s atmosphere is 260,000 km in diameter, almost twice as wide as the planet Jupiter. These dimensions make it a relatively easy target for backyard telescopes.

Comet PanSTARRS is falling toward the sun from the Oort cloud, a vast reservoir of fresh comets in the distant outer solar system. It has never visited the inner planets before, and, as a result, no one can say what will happen when its fragile ices are exposed to solar heat as it approaches the sun in August. Previous estimates of the comet’s brightness max out at magnitude +4–that is, barely visible to the unaided eye from dark-sky sites. Additional outbursts could boost its visibility even more.

The comet was discovered on Sept. 23, 2017, by the PanSTARRS telescope on the summit of the Haleakalā volcano in Maui. PanSTARRS’s primary mission is to detect near-Earth asteroids that threaten our planet. In the process,it sweeps up variable stars, supernovas, and comets like this one. With almost a year of data in hand, astronomers have been able to nail down the comet’s orbit. Click on the image to launch an interactive 3D visualization from JPL: 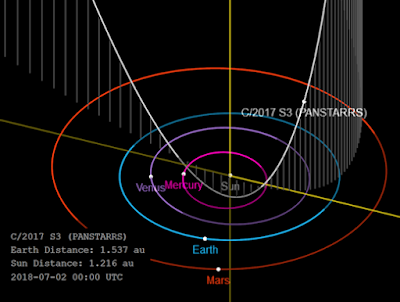 This is an extraordinarily cool animation. Go play with it!


Comet PanSTARRS is approaching the sun on a hyperbolic orbit–a narrow open-ended path that will ultimately fling it back to the outer solar system. At perihelion (closest approach to the sun) on August 15-16, the comet will be inside the orbit of Mercury, blasted by solar radiation at point-blank range. What will happen then?

I hope this one is clearly visible from earth. I've been disappointed by comets before.
Posted by Fritz at 8:01 PM