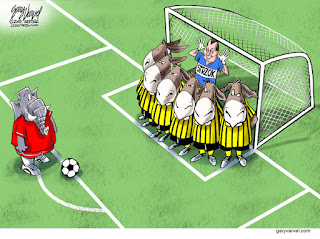 This was written on july 12, and I managed to overlook it heretofore. Tom Maguir at Just One Minute: The Strzok Show In Washington. It seems especially prescient this morning.

I take special umbrage to this:


“I understand we are living in a political era in which insults and insinuation often drown out honesty and integrity,” Mr. Strzok said, continuing: “I have the utmost respect for Congress’s oversight role, but I truly believe that today’s hearing is just another victory notch in Putin’s belt and another milestone in our enemies’ campaign to tear America apart.”

Yeah, yeah - sort of like how anti-war protestors were pro-Saddam, or pro-ISIS.

Or, more to the point, the original Russian plan seemed to be to divide the US electorate and de-legitimize the eventual winner, whomever that might have been. So one might just as well say that every time some member of The Resistance denounces Trump as a Russian pawn, Putin laughs. Does Strzok truly believe that this FBI 'investigation' is a victory notch in Putin's belt? Probably not. 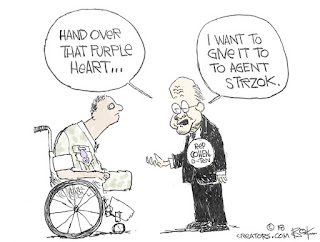 Nolan Finely, Detroit News:  Fire Strzok, suspend Congress. Except for the confirmation of Kavanaugh, I'm good with that plan. As Gideon J. Tucker noted: "No man's life, liberty or property are safe while the Legislature is in session." Ann Althouse channels Andrew McCarthy: "What is the point of arguing with Peter Strzok for ten hours about whether he was biased against Donald Trump?"


"The texts speak for themselves, illustrating beyond cavil that he was biased. In fact, his absurd caviling to the contrary suggests he’d be an easy witness to demolish if a competent examiner had the documentary ammunition. Bias is a dumb thing for Strzok to get uppity about. In 20 years of investigating people, I can’t tell you how many of them I developed a healthy bias against. Bias is a natural human condition. It is something we tend to feel about people who do bad things. There is, and there could be, no requirement that an investigator be impartial about the people he reasonably suspects of crimes. Am I supposed to be impartial about a terrorist? An anti-American spy? A corrupt politician? Seriously? The question is not whether the investigator is biased, but whether bias leads the investigator to do illegal or abusive things. In the case of Strzok and his colleagues, the questions are whether they applied different standards of justice to the two candidates they were investigating; whether, with respect to Trump in particular, they pursued a counterintelligence probe in the stretch-run of an election, premised on the belief that he was a traitor, based on information that was flimsy and unverified. These questions cannot be answered without the documents that explain the origin of the investigation. If the committees are not willing or able to hold government officials in contempt for stonewalling, and President Trump is not willing to order that his subordinates cooperate, it would be better to shut the investigations down than to further abide a farce."

His outward bias against Trump is so strong, every decision he had a part in should be regarded as tainted until proven otherwise.  Matt Vespa at Townhall:  ICYMI: GOP Grilled Lisa Page...Increased This GOP Rep's Concern That FBI Had Desired Outcome In Russia Probe. I had to look up ICYMI, in case you missed it and Connor Wolf at LifeZette: More Bad News for Strzok as Ratcliffe Says Lisa Page Is ‘Very Forthcoming’


“As I said before, she is a very forthcoming witness,” Ratcliffe told reporters after leaving the hearing room. “She gave us a lot of new information that we didn’t have before. So that will lead us to ask for some more people to make some more requests for information we do not yet have.”
. . .
“I think there are significant differences between their testimony about important material facts,” Ratcliffe said. “I think she has been as forthcoming as she can. I think she is trying to respect the real privileges that exist from her former employer and she is getting direction from FBI counsel about not answering certain things and she is trying to respect that. At the same time, I think she is trying to give us as much information as she’s allowed to do, which I think is a distinction and difference from what we saw with Peter Strzok.”


Make no mistake: This is nakedly politicized law enforcement. There is absolutely no chance any of the Russian officials charged will ever see the inside of an American courtroom. The indictment is a strictly political document by which the special counsel seeks to justify the existence of his superfluous investigation.

Oh, and by the way, the answer to the question posed above is, “Yes, it is now the official position of the United States that Russia gets our Constitution’s benefit of the doubt.” Here is Deputy Attorney General Rod Rosenstein announcing the Friday the 13th indictment: “In our justice system, everyone who is charged with a crime is presumed innocent unless proven guilty.”

Of course, the indicted Russians are never going to be proven guilty — not in the courtroom sense Rosenstein was invoking.
. . .
Rosenstein made another telling remark at his big press conference. The Justice Department, he explained, will now “transition responsibility for this case to our Department’s National Security Division while we await the apprehension of the defendants.”

Now, stop giggling over that last part — the bit where we hold our breath until Russian dictator Vladimir Putin extradites his spies into the FBI’s waiting arms. I’m talking about the first part: Mueller’s case, the definitive case about what Russia did to interfere in the 2016 election, is no longer Mueller’s case. It is being “transitioned” — i.e., buried — in the Justice Department unit that deals with counterintelligence matters that do not result in public trials.

As I said yesterday, Putin should order one of the 12 GRU agents to surrender to Mueller, to make him put up or shut. I suggest Aleksey Aleksandrovich Potemkin, so we can call it the "Potemkin prosecution." As with all Andrew McCarthy articles, you should read the whole thing. Margot Cleveland at the Federalist: Trump Is Right: Mueller’s Latest Indictment Suggests He’s Conducting A Witch Hunt


. . . Specifically, the indictment alleged Russian intel began its efforts to hack the DNC in March 2016, which was “before Super Tuesday II and the Florida/Ohio/Illinois primaries,” and thus before Trump became the presumptive nominee. Additionally, the indictment did not include any allegations that Trump campaign members colluded with the Russians.

Thus, while Mueller has brought more than 80 criminal charges against 20-plus people and three companies, as Andrew McCarthy quipped in response to the media misdirection: “There are 144 million more people in Russia who will never see the inside of an American courtroom. If Mueller indicts all of them, his stats will be *really* impressive . . . and there’ll still be no Trump espionage conspiracy against the election.”

This all goes to prove what Trump has been saying all along—that the special counsel’s investigation collusion between his campaign and Russia is a witch hunt.

The media may believe it is hurting Trump by continuing the Russia collusion charade, but it is not. The Left’s trial by ordeal will not destroy Trump, but it may well hurt our country and achieve Russia’s goal of sowing discord. Friday’s indictment of Russian nationals and Kremlin’s military agency should have united Americans in outrage over Russia’s attempts to influence our election, but instead a sideshow ensued, all to put Trump in his place.

Americans Know Where They Stand On The Mueller Investigation, by Dhrumil Mehta and Nathaniel Rakich at 538. A summary, "the damn rubes aren't listening to us anymore."

Trump's problem is that he has always refused, or been unable, to separate the two. One is about national security and international relations, while the other is about Donald Trump.

The president clearly believes if he gives an inch on the what-Russia-did part — if he concedes that Russia made an effort to disrupt the election — his adversaries, who want to discredit his election, undermine him, and force him from office, will take a mile on the get-Trump part. That's consistent with how Trump approaches other problems; he doesn't admit anything, because he knows his adversaries will never be satisfied and just demand more.

At the same time, there is nothing wrong with Trump fighting back hard against the get-Trump part of the investigation. Voters know that Democrats, Resistance, and NeverTrump activists have accused Trump of collusion for two years and never proven their case. Mueller has charged lots of people with crimes, but none has involved collusion. That could still change — no one should claim to know what is coming next from Mueller — but Trump, as a matter of his own defense, is justified in repeating the "no collusion" and "witch hunt" mantras.

And it's difficult to address the two parts of the probe separately, when both were started by the same crowd of crooked intelligence officials, and are currently being prosecuted by Robert Mueller. And that may be by design of Rod Rosenstein.

If the Trump/Putin Press Conference Shocked You, You're Not Paying Attention


Imagine for a moment that the President had told Putin where to stuff that souvenir World Cup soccer ball. The media would have briefly approved, critics might have issued momentary grudging appreciation, and John Brennan might have put down the voodoo doll. Meanwhile, the layer of ice that would have encased the relationship would shut the door on things Trump actually wants to achieve, goals a little more lasting than kicking Putin in the shins in public.

He would like to cooperate with Russia in fighting ISIS. He would like to loosen the buddy relationship with Assad in Syria. He might even seek to wheedle a Russian exit from Crimea. And being Donald Trump, he would surely like to see if there are trade deals to be gleaned from improved relations.

One might suggest that those are noble, but wouldn’t he also like to dissuade Russia from launching cyberattacks into our political process? I’m sure he would. He may well have made that clear behind closed doors over Finnish cuisine. But let’s spend a moment examining the source of all of this sudden hand-wringing.

How many people condemning Trump for coddling Putin raised the slightest eyebrow at the Barack Obama open mic wink to the Russians that he would have “more flexibility” after the 2012 election?

And how many of these sudden warriors for election purity are on the record fighting for voter ID and other laws which protect us from the real-life threat of illegal voting?

From the shrill retorts Monday afternoon, you would think Trump had delivered our nuclear codes to the GRU. The main thrust of the vilifications was: 1) We should be really tough on bad countries, and 2) Russia is a really bad country.

It's pretty clear that no matter what Trump said at Helsinki, he was going to be ravaged by the US press. So he said what he thought. I don't have the time or energy to go into all the fallout from Trumps Helsinki statements; but J.J. Sefton at Ace's Morning Report has a pretty good run down.
Posted by Fritz at 10:26 AM