In the Wake of the Flood

The news that a massive amount of debris from above Conowingo Dam has been washed into the Bay as a result of the recent heavy rains has reached the Bay newsfeed:


A stream of debris flushed into the Chesapeake Bay because of flooding from intense rainfall in Maryland.

After the floodgates of the Conowingo Dam were opened, water rushed down from the Susquehanna River, carrying large clumps of sticks and twigs.

Now, the Chesapeake is so clogged that Maryland Natural Resources Police issued an advisory to boaters, warning of the potential danger of the large debris floating on the water.

"If you have to be out, then just be cautious of your speed," Sgt. Cameron Brown said.


The Maryland Department of Natural Resources is asking people to use “extreme caution” while boating in and around the Chesapeake Bay due to large amounts of debris in local waterways.

Officials say a large amount of “marine debris” including tree limbs and other natural materials — the result of heavy rains that have swept across the region over the past week — is now in the mid-bay area.

On Mondays, crews from the Annapolis Harbormaster’s Office worked to clear a field of debris that floated into Ego Alley in Annapolis. Officials said the debris and sediment from the Susquehanna, Patapsco and Severn and other Chesapeake Bay tributaries after particularly heavy rains. 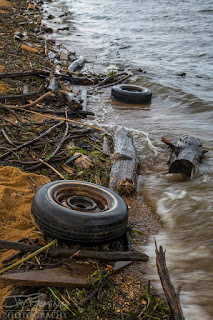 
The persistent storms that pounded the mid-Atlantic region in late July could have lingering impacts on the Chesapeake Bay, though it will take weeks, if not months, of monitoring for scientists to fully assess the potential damage.

The deluge, which dumped 7 inches or more of rain on much of the Bay watershed over a five-day span beginning July 21, could be a temporary setback for Bay recovery efforts, where underwater grasses and dissolved oxygen levels have shown signs of recovery in recent years.

Large rainfall events generally have significant impacts on water quality because they wash more nutrients and sediment into the Bay and its rivers, where they cloud the water, spur algae blooms, bury bottom habitats and contribute to oxygen-starved “dead zones.”


The July rainfall was especially heavy in a band extending north and south along Maryland’s Western Shore into southern Pennsylvania. Storms dumped at least 10 inches of rain in the area, with one spot in Baltimore County receiving as much as 15 inches, according to the National Weather Service. BWI Marshall Airport got inundated with nearly 11.2 inches of rain. Norfolk, at the base of the Bay, received slightly more than 4 inches. Dulles Airport and the District of Columbia’s Northern Virginia suburbs got hit with 5 inches of rain on July 21 alone, fueling a total of 7.7 inches over those five soggy days.


The rain boosted flows on the Susquehanna River — which provides about half of the freshwater entering the Chesapeake — to about 400,000 cubic feet per second at the Conowingo Dam, according to the U.S. Geological Survey. The river hits that level, on average, about every five years but hasn’t peaked at that number since 2011.

That flow was far above the average July rate of 38,800 cfs for the river. The gates on Conowingo Dam were opened to release the rising water, and Maryland issued voluntary evacuation orders for the Cecil County town of Port Deposit, about 6 miles downstream of the dam.

The timing of the recent rain event — during a typically dry midsummer month — is unusual. Very high stream flows are usually associated with spring rains and snowmelt and with tropical storms and hurricanes that occur in late summer or fall. (But Tropical Storm Agnes, the most severe storm in recent decades, hit in June.)

High flows in the summer can be more damaging than at other times because it’s the peak of biological activity for many important Bay species, from underwater grass beds to juvenile fish and crabs. Indeed, a recent report from the U.S. Army Corps of Engineers and the Maryland Department of the Environment examined the impact of high flow events from the Susquehanna River on the Chesapeake during similar storms in January, June and October. The June storm, it found, had “greater adverse impacts to water quality, habitat, and living resources than October and January events.”

On today's beach walk, there seemed to be a bit more ground up bark and leaves washed up. This could be from more local sources; I don't think the big mass of junk has arrived yet. I'm hoping it will mostly wash up further north and spare us.
Posted by Fritz at 6:24 PM