By way of news, the Manafort trial starts today: Liz Shield Mornign Brief at PJ Media: Manafort Trial Begins Today and Much, Much More. “Manafort is not on trial for anything related to treasonous RUSSIAN-collusion, he is on trial for working for President Trump’s campaign and for being a sleazy political consultant, which is a crime every other person is guilty of inside the beltway.” Jazz Shaw at Hot Air: So What’s Paul Manafort On Trial For Again?


"Hold the phone. So you’re saying that after all the hemming and hawing, immunity deals for witnesses and all the rest, the result of Manafort’s role in the Russian collusion scheme is a list of charges for… tax evasion?"
. . .
There are more dominos yet to fall and other people who may or may not be pleading guilty to something or going before a jury. But if this is typical of what Mueller has discovered from the past couple of years worth of campaign activity, there are going to be some very different questions for the Special Counsel to answer.

Bloomberg: Manafort Made More Than $60 Million in Ukraine,  Mueller Says Trial by envy and politics. The Dersh: Mueller Hoping Manafort Will Choose to Testify Against Trump Rather Than 'Die in Prison'


Dershowitz added that in D.C., Manafort is less likely to get a sympathetic jury and that the courts have "two shots" at him.

"[They're hoping to say] look, you have two choices: die in prison or testify against your former associate. And most people will take the 'testify' option rather than the 'die in prison' option." 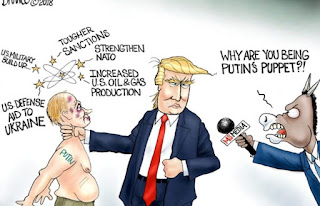 Kathryn Blackhurst at LifeZette: It’s Time ‘to Wrap Up’ Mueller Probe, Portman Says, "Although the Ohio Republican senator still supports the investigation, he believes it must be completed 'expeditiously'" Mueller's midterm elections at WaEx by Byron York. Will he finish by well before the midterms (it's getting kind of late for that), go dark for them, or continue to try and sink Trump? I know what I think will happen. Rowan Scarborough at WaT: No end in sight: Russia dossier investigation enters third year Jonathon Swan at Axios: Rudy on Mueller probe: "They don't have a goddamn thing". David Jackson at USA Today: Rudy Giuliani says Donald Trump team preparing report to counter Robert Mueller


Giuliani told USA TODAY that he believed Mueller's team is "writing the report as we speak.

Giuliani's own team worked on its "counter-report," which he said would be released after his team reviewed whatever Mueller filed with the Justice Department. It's unclear whether the special counsel will file anything with the DOJ.


. . . the story suggests to me that Mueller has many other angles he may have yet to explore. Mueller probably hasn’t exhausted the possibilities of building obstruction of justice charges against Trump based on his regular activities. Trump’s use of Twitter barely scratches the surface of the potential wrongdoing that falls within the scope of Mueller’s probe. Consider the possibilities:

• Trump has recruited and endorsed Republican congressional candidates in the midterm elections. If elected, these candidates might have to vote on articles of impeachment in the House and pass judgment on Trump in the Senate.
• Trump has raised campaign funds for the candidates he has recruited and endorsed. Now he has vowed to campaign for congressional candidates in the two months before election day.
• Trump has also criticized former Obama CIA Director and Gus Hall supporter John Brennan.
• Trump has in addition criticized Mueller’s supervisor in the investigation, Deputy Attorney General Rod Rosenstein.
• Trump has exercised his authority as president in ways designed to enhance his standing with American voters. If they were persuaded to vote for candidates Trump supports, Mueller’s investigation of Trump would come to naught.
• Trump has held campaign style rallies in which he has expressed impure thoughts about the Mueller investigation itself.
• Trump’s criticism of Sessions and Comey pales next to his criticism of Mueller himself. Indeed, it is based in part on Mueller’s investigation and actually includes ridicule. Trump has failed to provide Mueller the praise and encouragement he deserves in the pursuit of his removal from office.

Mollie Hemingway at Da Fed: Media Gaslighting Can’t Hide Fact Trump Campaign Was Spied On. But it won't stop them from trying. When all you have is a hammer. . . Chuck Ross at Da Caller:
Nunes: Americans Will Be ‘Shocked’ By Other Carter Page FISA Info. It would be hard to shock me anymore, but I've been following from the start.


After the Department of Justice released portions of the four FISA applications, Democrats claimed that the most damaging information about Page was found in the redacted parts.

"If you look at what they were saying... 'oh, but the really juicy stuff that proves collusion and how bad Carter Page really was and how they were colluding with Russians -- that's what's redacted!'"

He said the liberal media changed their tune when they found out that Republicans on the House Intel Committee were trying to get those portions unredacted.

Counter-prediction: No matter what's behind the redactions, Resistance journos and Fusion GPS lackeys will be there to cover the story...with a blanket. https://t.co/LSvIJ1arqz
— Chuck Ross (@ChuckRossDC) July 30, 2018 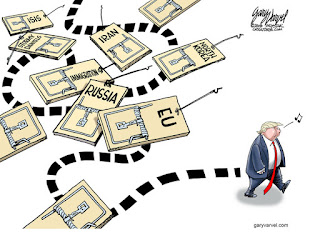 An interesting prediction via ImperatorRex: Thread by @_ImperatorRex_: "1. They're priming the pump for declassification and release of the unredacted FISA in stages, to calibrate for maximum effect with the mid- […]" #SpyGate #MAGA "IMO it will reveal extensive illegal surveillance by the Obama administration, stretching way back to 2015, when Trump announced his candidacy." And another:  "1. The conspiracy to frame Trump was a co-ordinated effort, with Obama at the center. Consider just this timeline. Warning : you WILL (and s […]" #TheStorm #MAGA. Rowen Scarborogh at WaT explains How Hillary Clinton used the anti-Trump Russia dossier during the campaign and S. Noble at the Independent Sentinel has Greg Jarrett’s research shows Trump Was “framed…for crimes he didn’t commit.”

Sharyl Attkisson asks an interesting question, Say Whatever happened to the 'unmaskings' probe?. We seem to have lost sight of that. She hasn't.


The Standard posted her cover story online under the headline “The Truth About Carter Page, the FBI, and Devin Nunes’ Conspiracy Theory.” Incidentally, Doss tried out another version of the piece for the Atlantic in “The FISA fiasco’s silver lining.” Both the Standard and the Atlantic identified Doss in part as former “senior minority [i.e., Democratic] counsel for the Senate Select Committee on Intelligence[.]”

Here’s the funny thing. Doss’s cover story illustrates Fred’s observation that Nunes has been victimized by a Democratic campaign of personal abuse and name-calling. Indeed, it could serve as Exhibit A to illustrate Fred’s point. According to Doss, “Nunes [has] spun a crazy conspiracy narrative.”

and Contra the dross of April Doss (2).

And the Cohen Follies continue: Rudy Breaks News: Team Cohen Is Privately Claiming A Second Meeting Of Trump Staffers About The Russians (Allahpundit). Sundance at CTH: Giuliani: President Trump Has Recordings of Dozens of Journalists Discussing Him With Michael Cohen…
President Trump has recordings, at least a dozen, of reporters discussing him, and their reporting/opinion of him, with Michael Cohen.

That could ruin their reputation for objectivity. Oh, wait, they have none. The Facts Behind The Trump Tower Meeting Are Incriminating, But Not For Trump from William Krumholz at the Federalist but but but MSNBC legal expert Jonathon Turley insists: Cohen flipping puts Trump 'one witness away' from catastrophe
Posted by Fritz at 11:35 AM