In Praise of the Fearful Frankenfish

Stop killing the Potomac’s snakehead, an opinion at the paywalled WaPo:

My brother and I had been fishing under an exit ramp to Interstate 495 on a tributary of the Potomac River when we heard shouts from my son and nephew. Finally, someone had hooked a snakehead. We paddled our canoe as fast as we could toward my son’s canoe, where my nephew was battling a fish from the bow. It’s hard for non-anglers to understand how riveted the four of us were on the outcome of the fight. We would vividly remember the details of the duel years six years later.

My nephew Danny recounts, “We were out of our minds with excitement! Every time I would get the fish near the boat, it would sprint away, tearing out yards of line.” Eventually, my son Michael jumped into the waist-deep water and scooped the eight-pound fish into our landing net and then into his canoe, where it thrashed for several minutes before he dispatched it with several blows to its bony head.

Our response to a snakehead hookup was typical. Check out the Department of Natural Resources’ Maryland Angler’s Log. Fights with snakehead are described as “amazing” and runs as “exhilarating.”

Unfortunately, this fish is in decline in some portions of the Potomac because for more than a decade, fish and game authorities on both sides of the river have asked fishers to kill every snakehead they catch. The time has come to end that practice, designate the snakehead a game fish and limit the number of snakehead that can be kept.

The request to kill them was once reasonable. After all, this is an invasive fish. It was first spotted in a Maryland pond in 2002. Two years later, it was in the Potomac. Its population grew rapidly. Authorities feared it might destroy the largemouth bass fishery that many anglers enjoy. But that has not happened, nor does it seem that it will.

John Odenkirk of the Virginia Department of Game and Inland Fisheries said last year that the bass population in the Potomac River system has recently increased. According to Joseph Love of the Maryland Department of Natural Resources, the snakehead population peaked in 2012. It’s about the same today, but in areas that have seen a lot of fishing pressure, the population has shrunk. Fishing guide Michael Starrett of Indian Head Charters has seen the number of snakehead his clients have caught plummet from 249 in 2013 to only six as of June 22. 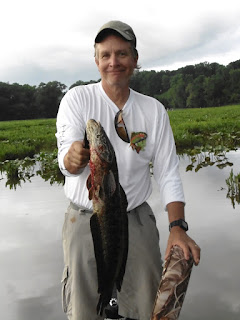 And I'm proud to say I was witness to one of those six:


For my money, the largemouth is not near the game fish that the snakehead is. Snakehead get almost twice the size of bass, fight much harder and taste better — much better. Plus, they often lurk in less than a foot of water, which means their wake can be seen racing toward top-water lures before the fish explodes on it. Take my word for it, this is what anglers live for. Now that it is reasonably certain that the snakehead is not going to ruin the Potomac’s ecosystem, anglers should not be catching, killing and dumping these magnificent fish back into the river. That’s a bloody business — you usually have to cut off their heads — that should be done only if absolutely necessary.

If the snakehead population drastically increases after it is named a game fish, the death penalty could be brought back. These fish are vulnerable to human predation. Starrett says bow hunters fishing at night with powerful lights are particularly successful at killing snakehead, because they make easy targets as they lie on the surface of shallow water. Other anglers snag snakehead as they migrate upstream. Each spring, hundreds of anglers with stiff rods, florescent line and huge gang hooks line the banks near Little Falls waiting to snag spawning snakehead, a technique that is illegal for all fish except the picked-upon snakehead.

We caught only that one snakehead during our trip in 2012. When we got to the dock hours later, four other fishermen gathered around our cooler to get a look at our catch. When I opened the lid, the snakehead sprang a foot in the air, scattering the eight of us. This die-hard deserves to live and flourish in the Potomac.

Having fished Mattawoman Creek with Mike Starrett almost yearly for about 10 years, I have to say, either snakeheads are awfully hard to catch (probably true) or not in sufficient numbers to be a real threat to the ecosystem. If my last trip was any indication., snakeheads and bass coexist quite nicely, each eating the others young.
Posted by Fritz at 3:10 PM