Those Who Dwell in Glass Mansions . . .

Should be wary about lithic projectiles. Stacy McCain: Disney Drops ‘Guardians of the Galaxy’ Director Over ‘Indefensible’ Tweets


James Gunn, who directed the Disney-owned Guardians of the Galaxysuperhero movies series, had recently used his Twitter account (with more than 500,000 followers) to bash President Trump. 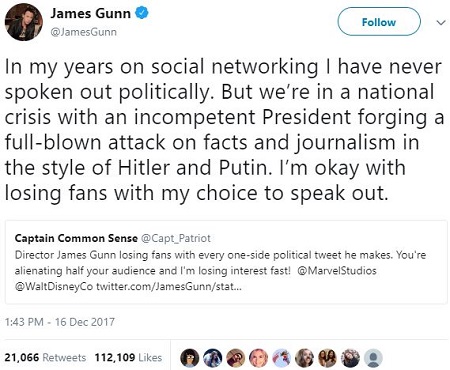 The ironic point, that Gunn had applauded Roseanne Barr’s firing from Disney-owned ABC because of her offensive tweet about former Obama White House official Valerie Jarrett, seems to have been missed by Gunn’s defenders. At any rate, Disney was not amused:

Turn about is fair play.


James Gunn is exiting Guardians of the Galaxy Vol. 3.
The move comes after conservative personalities resurfaced old tweets Thursday in which the filmmaker joked about controversial topics such as pedophilia and rape. Gunn has been an outspoken critic of President Donald Trump.
“The offensive attitudes and statements discovered on James’ Twitter feed are indefensible and inconsistent with our studio’s values, and we have severed our business relationship with him,” Walt Disney Studios chairman Alan Horn said in a statement Friday.


There is a debate among conservatives about whether this was a good thing. Do we really want to play by the Left’s rules?


The counter-argument here is that only when the left is forced to live by the awful rules it tolerates for the right will the rules change. . . .
Maybe this is a teaching moment for the left but I sort of doubt they’ll get anything out of it. They don’t really think they’ll ever pay a price because they’re absolutely certain they are on the side of the angels (about everything). So I think the main thing to do here is to keep saying that social media mobs are a bad thing and not stop saying it just because the mob got someone on the left this time.


Streiff at Red State points out:

Dammit, I was going to say that!

I thought GotG - I was fun. But I can live without GotG - III. And Stacy suggests there may be more:


By the way, there are some who suggest that Gunn wasn’t just “joking” about pedophilia. Gunn is friends with Huston Huddleston, who recently pleaded guilty to child pornography charges.

A pedophile in Hollywood? I'd be shocked, shocked!