The Year in Hypoxia, So Far So Good

Dissolved oxygen conditions in Maryland’s portion of the Chesapeake Bay mainstem improved in early July, according to the Maryland Department of Natural Resources. The department tracks hypoxia throughout the summer during twice monthly monitoring cruises.

Hypoxic conditions were worst off the southern tip of Kent Island, occurring at around 6 meters below the surface to the bottom. Lower Maryland stations saw hypoxia begin at 11 meters or deeper. Hypoxia was generally more concentrated toward the bay’s deeper center channel, unlike in late June, which partially accounts for the improvement. 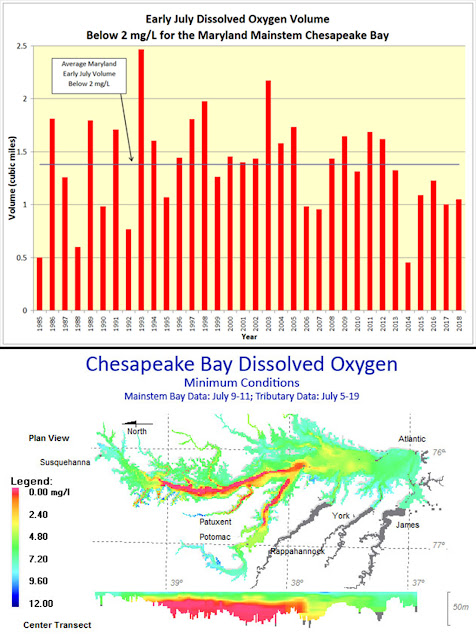 We haven't seen much sign of hypoxia at the beach; only one day did we spot a bunch of crabs and minnows hugging the shoreline.

It's quite likely that the flood of dirty water coming into the Bay from the Susquehanna and Potomac Rivers, along with the effect of having fresh waters sealing off the bottom from the atmosphere will spark a new round of bad water.