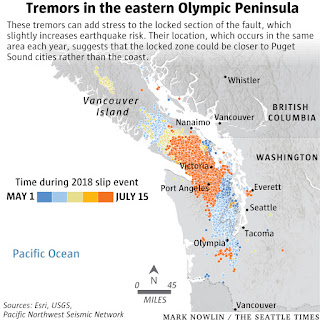 
Thousands of tiny tremors over the past few months have moved parts of Washington and Vancouver Island westward. It’s a near annual event that backs expectations by some scientists that a big earthquake may hit the Seattle area harder than their previous models suggested.

This recent wave of activity began in May and appears to be dying off now, according to University of Washington earth-sciences professor Ken Creager. It’s a process, known as episodic tremor and slip, thought to increase stress on locked faults — areas where tectonic plates cannot move past each other. Earthquakes occur when the pressure on locked zones reaches the breaking point and the plates snap past each other.

Scientists believe an episode of tremors could someday trigger a so-called megaquake on the offshore fault called the Cascadia Subduction Zone. The 700-mile-long fault runs from Vancouver Island to northern California, and can unleash earthquakes of up to magnitude 9.0. It’s one of the biggest of faults in the U.S.

While older models suggest that the locked zone is mostly shallow and offshore, the location of these tremors indicates that in a big earthquake, layers of rock jerking past each other may take place closer to Seattle than previously thought.

“That increases the risk that it could be closer to the population centers, which means stronger shaking in the Puget Sound cities,” Creager said.

Also unknown is the timing of the next big earthquake.The Pacific Northwest last saw a megaquake about 300 years ago. Scientists widely expect the region to experience a similar event every 500 years on average.

“It could happen anytime in the next few hundred years but it could be tomorrow,” said Creager.

Looks to me like the quakes are zeroing in on a place where the fault is locked. A big quake around Port Angeles or Victoria in the reasonably near future seems like a possibility.  But, in the words of Bill Mays, wait, there's more! Series of morning quakes off southern Oregon coast includes a 5.6 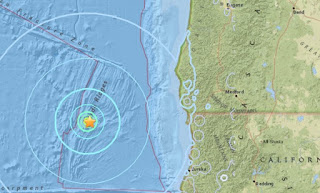 Eleven earthquakes ranging from 2.8 to 5.6 magnitudes were reported off Oregon's southern coast Tuesday morning, according to the U.S. Geological Survey.

The quakes, on average, were clustered about 126 miles west of Crescent City, California. No tsunami warnings were announced. Don Blakeman, a geophysicist at the National Earthquake Information Center, said the magnitudes haven't yet been serious, adding that quakes of this caliber occur fairly often off the coast.

Though the 5.6, which happened at 7:44 a.m., qualifies as a moderate earthquake, the impacts would be more significant if it had occurred on land rather than 10 kilometers under the sea, Blakeman said. Smaller earthquakes and aftershocks will likely continue in the area through the morning, he said, adding that he doesn't anticipate a larger magnitude will come along and trump the 5.6. Tsunami concerns don't usually come into play until at least a magnitude 7 is recorded, he said.

The earthquakes happened on the Juan de Fuca tectonic plate, which will likely be the source of a massive earthquake in the Portland and Seattle area in the future, but Blakeman said the rumblings Tuesday morning were nothing to worry about.