It is a parody site, but these days it's so hard to tell the difference between that and "straight news": Democrats Accuse Trump Of Sexism For Not Nominating Female Justice They Promised To Block


“Oh, we totally would have blocked her,” said Senator Elizabeth Warren (D-MA). “I mean, besides being a right-wing nutjob, the lady has seven kids. How would she find time to do the job? Even so, the fact that Trump turned her down shows how much of a misogynist he really is.”

I thought watching the left attack Amy Coney Barrett for being Catholic was going to be fun, but watching them attack Kavanaugh for liking baseball, using credit cards, and drinking beer is SO MUCH BETTER.
— Amber Athey (@amber_athey) July 12, 2018

Also from Legal Insurrection: Democrats Don’t Know Anything About Judge Kavanaugh, They Just Know They Don’t Like Him 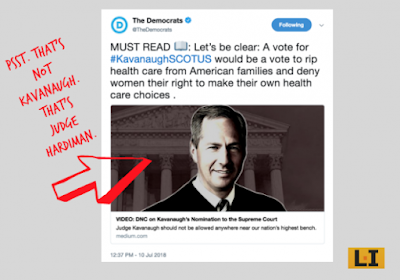 
Evi bring A film from 1960 that strangely captures the mood of Democrats and their media allies this week...

Somewhat more seriously The liberal freakout over Brett Kavanaugh is not helping (Damon Linker at the Week):


If that dire assessment of the peril posed by supposedly normal Republican ideas and goals is valid, then it means that one of the country's two parties poses something like an existential threat to our form of government — somewhat like the threat that an aggressive and potentially fatal form of cancer poses to the human body from the inside. On this view, Republicans are less a perfectly legitimate rival for power than a civic menace — a formidable enemy that needs to be decisively defeated. It's hard to see how the ordinary back-and-forth of democratic politics, with two or more parties trading or sharing power, can be allowed to continue when the prospect of the other side's political victory could precipitate the end of the system itself.


The New York Times published a piece today with the bland title “For Midterms, Supreme Court Political Drama Plays to Its Audience.” It turns out that’s a nice way of saying vulnerable Senate Democrats are struggling between telling the base what it wants to hear and reality. Right now, it sounds as if reality is winning. . . .