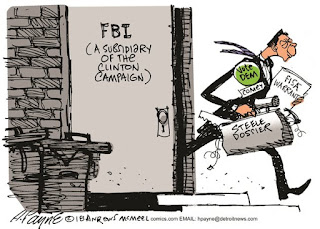 A boatload, again, already so let's get down to it.

John Sexton at Hot Air: House GOP Members Introduce Articles Of Impeachment Against Deputy AG Rod Rosenstein for the glacial speed of the release of the documents they want, and the level of redaction. Breitbart: Mark Meadows, Jim Jordan Introduce Articles of Impeachment Against Deputy Attorney General Rod Rosenstein.  Allahpundit: Paul Ryan: No, I Don’t Support Impeaching Rod Rosenstein. Chris PandolfoLevin: at the Conservative Review: Yes, Rosenstein ‘should be impeached’ Come On, You Can’t Impeach Rosenstein, Says …. Judge Andre Napolitano. Proving that it's easier to do nothing than something House Republicans sidestep Rosenstein impeachment move, at least temporarily Whew, that was all very fast.

And just because it deserves its own line, Da Caller: Tucker Carlson And Trey Gowdy Blast Schiff: ‘He’s An Irresponsible Buffoon’  Amen, bros. He should get his thyroid checked too, it looks like he has bug eyes.

Old man discovers Twitter, disapproves. Ace: Mueller Examining Whether He Can Indict Trump For Obstruction of Justice Based On His... Public Tweets "Insulting his insubordinate subordinates on Twitter might now be a crime, Mueller has decided." Notorious Never-Trumper Allahpundit tweets

Trump getting indicted for obstruction because of random pissy things he tweeted while sitting on the toilet in the morning would be *kisses fingers*
— Allahpundit (@allahpundit) July 26, 2018


Neo-Neocon:  Mueller is still looking for the pony: the never-ending investigation. And by way of Wombat-socho's "In The Mailbox: 07.26.18" Scott Johnson at Powerline: More Mueller Madness.


The latest evidence for the proposition is today’s New York Times story by Michael Schmidt and Maggie Haberman, “Mueller Examining Trump’s Tweets in Wide-Ranging Obstruction Inquiry.” I hesitate to say that we are reaching the clown car stage of the Mueller extravaganza, but if the Times story is to be taken at face value we might be getting there. Rudy Giuliani responds with uncharacteristic understatement in the comment quoted by the Times: “If you’re going to obstruct justice, you do it quietly and secretly, not in public.”

This is how you know he's got nothing.

OK, I just can't bear to go through all the Cohen stuff again so: