FBI On Trial in Oregon Shooting 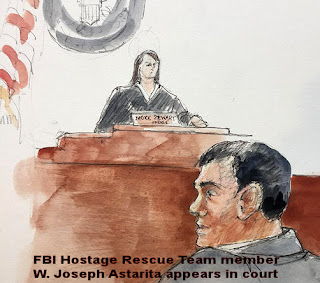 In opening statements Wednesday, Assistant U.S. Attorney Gary Sussman made clear that the case will not focus on whether Finicum’s shooting was justified but on whether Special Agent W. Joseph Astarita fired two shots and then lied about doing so. Sussman told the jury that both shots were covered up by officers on the scene — and that aerial footage captured from two FBI planes will show officers picking up items in the snow near where the victim lay.

“Those shell casings were gone,” he said.

But defense attorney Robert Cary — perhaps best known for representing former U.S. senator Ted Stevens (R-Alaska) on corruption charges a decade ago — told jurors that those two shots could have come from Oregon state troopers as well as Astarita’s supervisor. “What does the government have?” Cary asked, noting that there were no other eyewitnesses or ballistic evidence.


Astarita’s trial follows withering criticism of the FBI not just from the self-described patriot movement but, more recently, from the country’s highest political office. For months President Trump has labeled a former director a liar and accused the agency of carrying out a witch hunt in its investigation of Russian interference in the 2016 presidential election. Last week, he publicly questioned the agency’s integrity after he held a meeting with Russian President Vladimir Putin.

At the same time, Trump has buoyed groups that chafe over the federal government’s control of Western lands. The president recently pardoned Dwight Hammond Jr., and his son, Steven, cattle ranchers who were in prison for setting fires on public land they used for grazing. The armed seizure of the Malheur National Wildlife Refuge in southeastern Oregon was in part sparked by the criminal conviction of the Hammonds.

“No matter who wins this case, the government loses,” said J.J. MacNab, a fellow in George Washington University’s Program on Extremism who studies anti-government groups. “If the prosecution fails to convict . . . then this case is another example of a Justice Department overreaching. If Astarita is convicted, then the movement will see this as evidence that LaVoy Finicum was murdered by law enforcement.”

The agent, a member of the FBI’s elite Hostage Rescue Team, allegedly lied about shooting at Finicum during a fatal traffic stop on Jan. 26, 2016. The 54-year-old Arizonan had been one of the leaders of the Malheur takeover, which quickly became a magnet for anti-government militias and members of the patriot movement from around the country. His death then became a flash point.
. . .
Astarita, 41, faces two counts of making a false statement and one count of obstruction of justice over the shots that the prosecution says he failed to disclose having fired at the vehicle. His gunfire was revealed by video taken by a passenger in Finicum’s truck as it was hit with bullets.

I've covered the Malheur rebellion since the beginning:

Has the Next American Revolution Already Started in Oregon?

It's not alleged that Astarita shot Finicum, who was not wounded before he was shot to death by Oregon Troopers. It's strongly suggested though, from what I've seen, that Astarita fired the opening shots in the encounter, into the car of the protesters just after the car had served off the road because of the roadblock in the way and while Finicum was exiting the car with his hands up, from above and behind the car. A video taken within the vehicle clearly records the shot, and the car had a bullet hole that came through the roof. In the article, Ryan Bundy claims to have a second bullet in his body, available as evidence if needed.

Although Astarita didn't admit to shooting, his gun was missing two bullets after the incident, and showed evidence of being fired, so presumably he either forgot firing on the passengers, or lied to his superiors about the incident. It seems like that might be something he would remember; on the other hand, he should know he would be expected to account for his bullets. He is accused to lying to the FBI, which would be fire-able offense, and possible jail time, as Michael Flynn and George Papadopoulos can attest.

However, the incident might have unfolded entirely differently had he not fired into the car. Although Finicum was a bit of a hot-head, and might still have come out spoiling for a fight, than again, perhaps not, and without previous shots, the troopers might not have been as quick to shoot, so he may be at least partially responsible for the death of Robert Finicum
Posted by Fritz at 4:28 PM