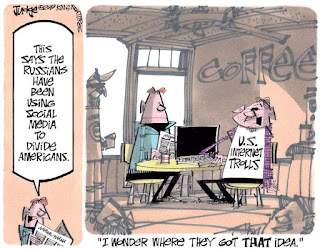 The post-Helsinki damage control continues. This afternoon President Trump gave an interview to CBS News in which he affirmed that Russia meddled in the 2016 election and that he holds President Putin responsible for it. CBS posted this transcript of the exchange between Trump and anchor Jeff Glor:


GLOR: “You say you agree with U.S. intelligence that Russia meddled in the election in 2016.”
TRUMP: “Yeah and I’ve said that before, Jeff. I have said that numerous times before, and I would say that is true, yeah.”
GLOR: “But you haven’t condemned Putin, specifically. Do you hold him personally responsible?”
TRUMP: “Well, I would, because he’s in charge of the country. Just like I consider myself to be responsible for things that happen in this country. So certainly as the leader of a country you would have to hold him responsible, yes.”
GLOR: “What did you say to him?”
TRUMP: “Very strong on the fact that we can’t have meddling, we can’t have any of that – now look. We’re also living in a grown-up world. Will a strong statement – you know – President Obama supposedly made a strong statement – nobody heard it. What they did hear is a statement he made to Putin’s very close friend. And that statement was not acceptable. Didn’t get very much play relatively speaking. But that statement was not acceptable. But I let him know we can’t have this, we’re not going to have it, and that’s the way it’s going to be.”

This is a perfectly acceptable line for the President to take. He didn’t really finish his statement about his own “strong statement” to Putin, but it seems where he was going with this was to say that we can’t expect a strong statement to immediately change things. Again, that’s a reasonable and realistic take, one that the President suggested when he was in England before his trip to Helsinki. During his joint press conference with PM Theresa May, Trump was asked what he planned to discuss with Putin. After discussing nuclear proliferation he said he would also bring up election meddling but added, “I don’t think we’ll have any ‘Gee I did it, I did it, you got me.'” He added, “There won’t be a Perry Mason here, I don’t think.”

It's also pretty good evidence that he accepted that Russian meddling had occurred before Helsinki, in all 57 states, while keeping the health insurance he liked. Mort Kondracke is convinced Mueller Will Show That Trump Is in Putin's Pocket. Man I haven't heard from Mort in years. Didn't he used to argue with John McLaughlin on The McLaughlin Group? 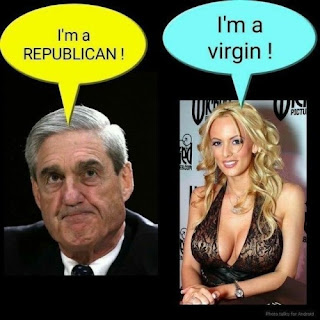 Ace: James Comey: All Americans Have a Sacred Duty to Vote for Democrats. Tyler Oneal at PJ Media, James Comey's Reason to Vote Democrat Is Actually a Reason to Vote Republican. I've long been skeptical of claims that Comey, Rosenstein, Mueller et al are Republicans. I believe they found it convenient to register Republican back in the day as camouflage, to mix in the law and order flock. Now they are nakedly in the "Deep State" party.

And then there's Brennan:

"John Brennan started out his adulthood by voting for the communist party presidential candidate. He is now ending his career by showing himself to be the most biased, bigoted, over the top, hyperbolic, and unhinged Director of the CIA we have ever had." -@RandPaul. pic.twitter.com/OUt6xn2uOj
— Nick Short 🇺🇸 (@PoliticalShort) July 18, 2018 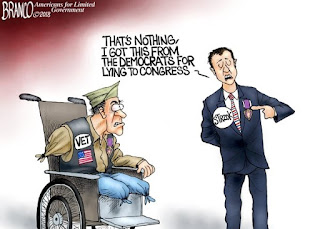 Ace: Reminder: The Russians Targeted Republicans, GOP, and Trump Himself In Their Spearfishing and Hacking Schemes, Too


The media and the sillies don't like admitting this, and Mueller doesn't draw much attention to it himself in his indictment. But he does mention it on page 13.

Don't expect to see this on CNN.

If they could collect it and analyze it, the Russians would take everything they could get. The NSA can and does everything we let it take, and then just a bit more. Thomas Rid at Politico: What Mueller Knows About the DNC Hack—And Trump Doesn’t We're supposed to be satisfied that Crowdstrike sent copies of the DNC servers to the FBI, after Crowdstrike had a chance to clean them. Like with a cloth.


. . . While the above is incredibly twisted, it’s become increasingly clear that Russiagate has become something akin to a religion. It’s adherents have become so attached to the story that Trump’s “wholly in the pocket of Putin,” they’re increasingly lobbing serious and baseless accusations against people who fail to acquiesce to their dogma. I was a victim of this back in November 2016 when I was falsely slandered in The Washington Post’s ludicrous and now infamous PropOrNot article.

Via Wombat-socho's "In The Mailbox: 07.18.18" The Geller Report explains how Peter Strzok Grew Up In Iran, Saudi Arabia; Was Obama & Brennan’s Envoy To Iranian Regime. But one may or may not relate to the other. Also Weasel Zippers: Former CIA Director Brennan Says Intel Community May Start Withholding Info From Trump. Look who's trying to suborn treason now. All because his girl didn't win the election. 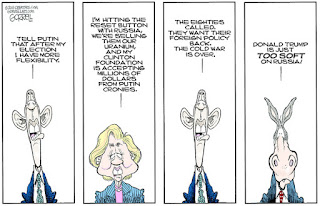 
Aaron Blake at the Washington Post unsurprisingly joined Morning Joe and other liberal outlets in speculating, with no evidence, that the President is “compromised” because Russian President Vladimir Putin has “dirt” on him. This is the ongoing “kompromat” theory, using a term which is quickly becoming the new favorite Russian word of many in the press these days. It’s defined as, “damaging information about a politician or other public figure used to create negative publicity, for blackmail, or for ensuring loyalty.” In other words, Putin supposedly has some sort of scandalous, if not impeachable material hanging over Donald Trump’s head, resulting in his willingness to treat the Russians with kid gloves.


Now the broader idea that Russia has compromising information, or kompromat, on Trump has moved even more to the forefront. And it’s all thanks to Trump’s decision to hold a bilateral meeting with Russian President Vladimir Putin — and then practically bow to him.
The thing about Trump’s posture toward Putin isn’t just that it’s highly controversial and questionable given Russia’s 2016 election interference; it’s also totally counter to Trump’s brand. This is the guy who wrote the “Art of the Deal” and, just days before his meeting with Putin, was wrecking shop at a NATO summit in hopes of getting fellow members to kick in more for the common defense.
Even as he has oscillated from being extremely tough on and extremely friendly toward North Korean leader Kim Jong Un, Trump has almost always been deferential to Putin. And that was certainly the case Monday.

The obvious failure in this analysis is provided by the author himself. President Trump went from calling Kim Jong-un “Little Rocket Man” to “Chairman” in a matter of weeks. Why? Because Kim “has something on him” that’s hidden? Obviously not. It’s because he felt it was working for him in the negotiations. And if things fall apart with North Korea we shall no doubt see the name Little Rocket Man showing up in Presidential tweetstorms in short order. 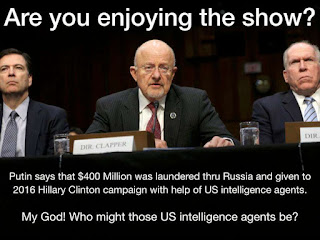 WaPo has become almost impossible to read because it seems like all their writers are screeching and tearing their hair. But, if Conrad Black is right, Trump Will Win This Round With the Deep State


What makes this controversy so unique, riveting, and infuriating, is the ability of the palsied Democratic leaders, with their media accomplices and dupes, to keep this dead pigeon of collusion alive by pretending Mueller is conducting a serious investigation; and that they may ride the traditional wave of midterm congressional losses for the administration to distract and paralyze the government with a fraudulent impeachment debate and hopeless Senate trial consuming much of 2019 and deferring the day of reckoning for the culprits of the Clinton campaign and the Justice Department and intelligence agencies.

They are trying to cover up the greatest illicit meddling in an American election in history: by American intelligence agencies. In their desperation since the defeat of the candidate they covertly supported, who would have covered it up for them, they have been trying to maintain the fraud of collusion and conflate it with the trivial and routine interventions of some Russian operatives in the 2016 election.

The president saw that the only way to resolve this is to campaign energetically in the midterms (which no president has really done before), in opposition to open borders, a rollback of tax cuts, and this dishonest and unconstitutional skullduggery. He should celebrate Labor Day by ordering the release of what the congressional committees have been demanding from Rosenstein for many months.

Trump could have handled things better in Helsinki, and should not have provoked a clarification from National Intelligence Director Dan Coats. But fundamentally he is right. And he will win.

From his fingertips to God's eyes.
Posted by Fritz at 8:07 AM