It would be rare, but not unheard of to see a seahorse near Southern Maryland, but they mostly live in the southern parts of the bay. Only a few of the seahorses in the museum’s collection are wild caught, as a few were found by a waterman when they got caught in his crab trap.

The seahorses live in sea grass beds. As sea grass growth has struggled in recent years, the seahorses undoubtedly struggle with habitat loss. But, some recent studies suggest sea grasses are coming back to the bay.

The volume of bay grass reached a record high of nearly 60,000 acres in Maryland in 2016, representing a 10 percent increase from 2015 and surpassing the state’s 2017 restoration goal of 57,000 acres a full year ahead of schedule, according to previous reports. 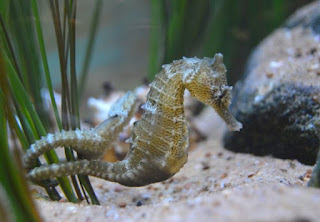 “These underwater grasses are essential to a healthy and sustainable ecosystem,” Mark Belton, Maryland Department of Natural Resources secretary, said in a 2017 article.

Seahorses are considered to be fish, although they look nothing like a typical fish. A close relative is the pipefish, which also live in the tank with seahorses at the marine museum. Seahorses have a long nose or snout that is used to slurp up small prey.

“They don’t have any teeth or chew things up. They slurp up their food,” Hampton said. Their food source is mainly tiny crustaceans. In the back area of the museum, staff have bubbling glass containers to culture the algae the seahorses eat.

They have prehensile tails, which means the tail acts as sort of a limb, like a monkey’s. Seahorses can grab on to bay grass with their tails to keep from moving away with strong currents, as they’re not strong swimmers. Their movement comes from a dorsal fin on their back and two small fins near their faces. Despite their slowness, they’ve managed to exist on the earth for a few hundred million years and individual seahorses can live up to 10 years.

I've seen them on rare occasions. Hopefully with more sea grasses, they will become more common again.
Posted by Fritz at 7:00 PM