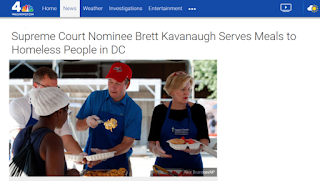 In an alarming show of religious extremism and complete disregard for the separation of church and state, Supreme Court nominee Brett Kavanaugh was spotted by news reporters serving food to the homeless.

Kavanaugh performed the frightening display of religious devotion alongside an organized group of radicalized Catholics, whose extremist mission appears to be helping the needy. Local news crews leaped out of the bushes and caught him in the act, asking him, “What do you have to say for yourself, BIGOT?”

“It is disturbing that a SCOTUS nominee can so flagrantly practice his faith in the public sphere without fear of reprisal,” read an opinion piece published on Politico. “We want justices who don’t have an inherent bias for lifting up the poor and enacting mercy and, well, you know—justice.”

But is it really parody? Scrappleface (I didn't know he was still in the business!): Schumer to Stall Trump Pick Until GOP Sweep

“Judge Kavanaugh, a great scholar whose respect for the law and the Constitution, and whose clear writing, have earned him praise across the political spectrum, is, nevertheless Trump’s nominee,” said Senate Minority Leader Charles Schumer, D-NY. “He must therefore be opposed until the last swing-state Democrat loses.”

Schumer said his party is committed to the unfinished work of Hillary Clinton, who lost to Trump despite the clear choice the two offered on the abortion issue. . . .

The Washingtof Free Beacon: Liberals Are Furious Over the Nomination of [Insert Name Here] to Supreme Court


The Daily Mail: Mystery as IDENTICAL letters appear in 21 newspapers across 12 states slamming Trump's Supreme Court pick – and they're all signed by different people


At least 21 papers were duped last week, including big-market brands like the Dallas Morning News and The Washington Times. They ran identical letters over a four-day period, each signed by a different person.

The effort is an example of public-relations 'astroturfing,' a technique meant to simulate genuine grassroots support for an idea or cause.

The form letter is one small piece of the message minefield erupting around Kavanaugh as he prepares for a brutal confirmation process that will end with scant support from Democrats. 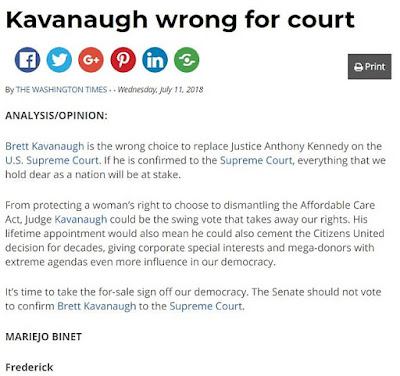 Three of the newspapers contacted Friday by DailyMail.com later removed the letters from their websites. Two, the Morning News and the Union Democrat of Sonora, California, publicly explained why.
. . .
Richard Lodge, editor of The Eagle-Tribune in North Andover, Massachusetts, said Friday after hearing from DailyMail.com that he called the apparent 'signer' of the letter his paper ran, and '[s]he said she didn't send it.'

Hey, it said what they wanted to see, so they published it.

Manchin to Schumer: ‘Kiss my you know what’: Schumer hamstrung in SCOTUS fight


“I’ll be 71 years old in August, you’re going to whip me? Kiss my you know what,” said Sen. Joe Manchin (D-W.Va.) when asked if Schumer can influence his vote.

Ruth Marcus says this like it's a bad thing:  Kavanaugh looks a lot like some former justices. Just not Anthony Kennedy.


Brett M. Kavanaugh describes Justice Anthony M. Kennedy, for whom he clerked and whose seat he has been tapped to fill, as his “mentor.” But Kavanaugh’s true judicial role models may be two other, significantly more conservative justices — William H. Rehnquist and Antonin Scalia.

As it happens, Kavanaugh gave speeches last year about each of them. To read them now is to get a glimpse of a future Justice Kavanaugh, and, let’s just say, he doesn’t look much like the justice he would replace.

"In a rather self-serving approach, one law professor yesterday seemed to be arguing on Twitter that after Trump’s Helsinki press conference, true conservatives should withdraw their support for Kavanagh. As a matter of high principle, this is kinda . . . convenient."