Russiagate on the Rocks

Charlie Savage’s New York Times article draws no inferences from the timing. I say the Saturday night document dump resets best scandal management practices. These documents were not released on Saturday night because the FBI and the Department of Justice are proud of themselves for what they reveal.

The phrase a “self-licking ice cream cone” refers to “a self-perpetuating system that has no purpose other than to sustain itself.


I liked what the great Tom Fitton of Judicial Watch had to say about the heavily redacted 400-page DOJ document dump regarding the FISA warrant to spy on Carter Page. It is, he said, a “self-licking ice cream cone.” The image is appropriately surreal. But the more I think about it, the more I think it is only partially applicable to the whole RussiaGate melodrama we’ve been witnessing for the last year and a half.

Wikipedia defines this autogleipsimous activity as “a self-perpetuating system that has no purpose other than to sustain itself.” The Mueller investigation and its attendant pseudo-pods in the media and “intelligence community” are indeed self-perpetuating. But they exhibit a purpose that goes far beyond their own self-perpetuation.

No, in this safari, big game is the object, the end, the purpose, to wit: the destruction of the president of the United States.


Here are some headlines from September and October 2016:

All of these articles, published in the closing weeks of the 2016 presidential campaign, were the result of (a) the infamous Steele dossier, created for Fusion GPS under contract with Democrats, and (b) unauthorized leaks from within the FBI and other federal agencies. We know that senior FBI officials were biased against Donald Trump, that the Mueller investigation has made no charges of wrongdoing by Carter Page, and that “Source #1” for getting a FISA warrant for surveillance of Page was the Steele dossier:
. . .
The Steele dossier and media leaks were the only basis for this surveillance, so far as we know, and more than a year into Mueller’s investigation, there has been zero evidence of wrongdoing by Page.

All of this indicates that the Obama administration wrongly targeted a U.S. citizen for surveillance, in service to a partisan effort to discredit the Republican presidential candidate, by giving a semblance of official credibility to the Steele dossier that Democrats paid for. Note that the liberal media were willing participants in all this, repeatedly publicizing the federal “probe” of the “Trump adviser” and his Russian “ties.”

This is the real “Russian collusion” scandal — the Deep State colluding with the “fake news” media in an effort to help Hillary Clinton win and, when that failed, working to sabotage Trump’s administration by creating the appearance that his victory was illegitimate.

On the newly-released Carter Page FISA wiretap application: There are many blacked-out paragraphs and pages. I don't know what is in them. That said, here, from the unredacted portions, is the dog's breakfast of a case the FBI made for wiretapping Page: 1/14
— Byron York (@ByronYork) July 22, 2018


Even more Tapscott: This FISA Passage Points to the Heart of Mueller’s Collusion Case Against Trump - FBI officials contend Carter Page allegedly influenced the president and the Republican Party to go easy on Russia in Ukraine and points out that the FBI seems to be concerned that "Candidate #1" might change policy on the USSR and Ukraine. That ain't your business, boys.

Ann Alhouse:"Carter Page on Sunday called the accusations against him detailed in the foreign surveillance warrant application released by the FBI 'so ridiculous.'"


"'You talk about misleading the courts, it's just so misleading... It's literally a complete joke.'"

CNN reports on the interview that was on CNN's "State of the Union."

I have not attempted to read the long document that was released, but one of the commenters in last night café, Yancey Ward, did:
. . .
I don't have the patience to read the thing myself, but that shows why government officials may chose to write long, evasive documents. Let me know if there's anything about Yancey Ward's description that you think is wrong and tell me exactly why. And don't be verbose! I'm suspicious of verbosity. It makes me feel that you are hiding something.

Byron York works his way through the Nunes memo paragraph by paragraph and confirms that the  FISA warrant application supports Nunes memo, while John Hideracker at Powerline notes how The Associated Press Lies About the FISA Application. Why would you expect better?


The AP seems to suggest that there is some inconsistency between Page’s denial of being an “agent of a foreign power” and his claim, back in 2013, to be an “informal adviser” to certain Russians. Any such suggestion is entirely false.

Obviously, these are serious charges. In its FISA application, the FBI expressed confidence that Carter Page was an “agent of a foreign power.” But he wasn’t. We know that for certain, because if there were even even the faintest hint of evidence after months of Democratic Party surveillance, Bob Mueller would have charged him. Carter Page is innocent, and the FBI’s assurances to the FISA court were false. You would never learn this from the AP’s biased account, however.


“We’ll never know whether or not the FBI had enough without the dossier — the unvetted dossier — because they included it, and everyone who reads this [Foreign Intelligence Surveillance Act] application sees the amount of reliance they placed on this product funded by Hillary Clinton’s campaign and the DNC,” Gowdy said.
. . .
“The other thing I hope my fellow citizens will take note of is the FBI missed a really good opportunity to tell the judge exactly who paid for that,” Gowdy said, pointing to a footnote in the warrant application. “If you look at the footnote, it takes a lot more effort to define it the way they did, where you have no idea who funded it, than just to come right out and say the DNC hired Perkins Coie, who hired Fusion GPS. who hired Christopher Steele.”

More Gowdy care of Allahpundit Trey Gowdy: If There Was Any Evidence That Trump Colluded, Adam Schiff Would Have Leaked It Already Self evident.


Among the positions he took this morning in “Fox News Sunday,” in no particular order:


Eli Okun at Politico": Graham: Carter Page wiretap ‘not at all’ justified, Should Somebody Hire Carter Page A Lawyer? The Last Tradition: Trump says looking more and more like his campaign was 'illegally being spied upon', new documents released on Saturday and Sometimes Memes Explain Russiagate Better Than Words. One of several: 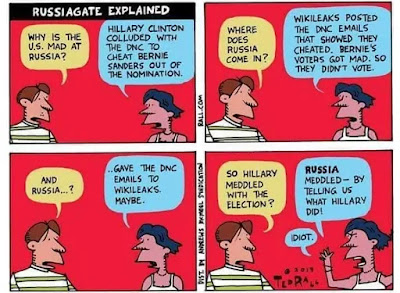 
I wonder if the people in FBI leadership -- trapped in their own feedback loop -- really understand what damage they have done to the organization's reputation in the country at large. It's close to irreversible. Or perhaps they don't care, as long as they get their man -- Trump, obviously, not Carter Page, the small fry of small fries. (The news that Mueller was immunizing Tony Podesta to rat on Manafort just about put the capper on the whole thing.)

Why is Mueller handing off key cases? by Byron York at the WaEx:

What is going on? I asked a few former federal prosecutors if they saw any messages in Mueller's move. The takeaway: These aren't encouraging developments for those longing for a big collusion/conspiracy/coordination indictment from Mueller.

"I think it proves that little if any of what Mueller's team has generated so far is linked to the special counsel's mandate," said Former Prosecutor 1. "Everything that is public so far could, should and typically is handled by either United States Attorney offices of jurisdiction; National Security Division attorneys, or even Criminal Division attorneys at Main Justice."

"I think Mueller doesn't have anything on collusion," said Former Prosecutor 2. "I think we would have seen it. I don't see anything that looks like there's a crime lurking — maybe he's got eight indictments under seal, but to me, it makes no sense. All of this says to me there is no there there."

Katelyn Polantz, CNN: How long will Mueller's investigation go on? As long as it takes to get Trump on something, anything. At least that seems to be CNN's view. "Tyler Durnden" at Zero Hedge notices the same players in a different game: FBI Probe Into Russian Uranium Bribes Concealed By Obama DOJ; Mueller, McCabe, Rosenstein Involved. Michael Ledeen at PJ Media: Why Are the Democrats and the Spooks Suddenly so Ferociously Anti-Putin? One can almost always ascribe Democrat behavior to psychological projection. Because they did it, they're sure you will too. Politico: Rand Paul to ask Trump to revoke security clearance of ex-CIA chief Brennan About time. Willis L. Krumholz at the Federalist: At Helsinki, Trump Undermined Our Power-Abusing Intelligence Agencies, Not America. True dat.

She sure got around Alleged Russian agent Maria Butina met with Obama administration officials in 2015, new report says and she isn't even that hot.
Posted by Fritz at 2:34 PM