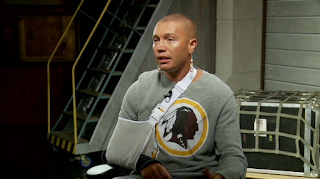 The incident allegedly occurred when Barrett Dahl, an autistic college student from Oklahoma, showed up at a powwow in Washington wearing a Redskins football jersey, which he told Oklahoma's News 9 he viewed as source of cultural pride. Within seconds of sitting down, Dahl said, he was approached by William Mendoza, the executive director of the White House Initiative on American Indian and Alaska Native Education.

"He comes to me and calls me the name weetard not retard, weetard. 'You're a weetard for not understanding Redskins is offensive,'" said Dahl, who is a member of both the Choctaw and Sac and Fox Nations. He said Mendoza continued, "Where are you from? You're so stupid and uneducated. You don't understand Redskins is offensive? And I tell him I'm from Oklahoma as I'm very proud to be and that's when he spits on me." 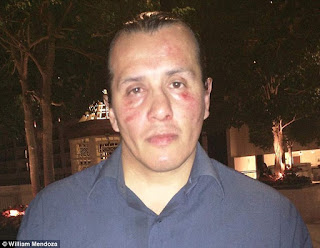 I'm hoping there's a video of the episode, because the two sides have very different recollections of what happened after Mendoza accosted Dahl for the allegedly offensive shirt.


An attorney for Mendoza, Mark Zaid, said Mendoza was traveling and unavailable for comment. However, he said that according to notes Mendoza had provided, Mendoza had approached Dahl to ask about the shirt. He said Dahl replied, "I don't have to [expletive] explain [expletive] to you. If you want to step outside and take this outside, I'd be happy to explain it to you."


I'm shocked that his note put his story in a favorable light.


The two disagree on who started the subsequent physical altercation. Afterward, Dahl had to undergo multiple surgeries for injuries to his hand. Dahl said he hopes to recoup the thousands in medical expenses by suing Mendoza, while Zaid said that Mendoza is interested in suing Dahl for defamation.

Looks to me like Mendoza hit his head on Dahl's hands pretty hard, any number of times. You'd think a White House adviser would have more sense than to engage in fisticuffs with the public.
Posted by Fritz at 6:00 PM