I Escaped in the Nick of Time

Having ruined the humanities, with a lot of help with the diversity mongers, feminists have set their sights on the hard sciences: Academic Absurdity of the Week: Feminist Chemistry?


Did you know there is an International Journal for Philosophy of Chemistry? Neither did I, but of course it exists, for there really is no crazy identity politics “intersection” that doesn’t have its own journal read by dozens.

The IJPC recently offered up a two-part article on “Gender in the Substance of Chemistry,” by Agnes Kovacs, who you will be unsurprised to learn is a professor of gender studies at Central European University in Hungary.

Part 1 considers “the ideal gas,” which will certainly prompt a number of obvious suggestions from our regular commenters:


Abstract: This two-part paper is about the possibility of analyzing the content of chemistry from a gender perspective. The first part provides an example of what such an analysis would look like. The second part is an outline of the theoretical perspective that makes the analysis possible. The example is the model of the ideal gas, the cornerstone of the theory of matter in chemical thermodynamics. I argue that this model is built on fundamental philosophical assumptions (Platonic idealism, hierarchy among states of matter, atomism/ individualism, and the negligence of interrelationships among parts and of their embodiment) that have been problematized by feminist scholarship. The same patterns are evident in the treatment of ideal and real solutions in chemical thermodynamics. I argue that it is possible to imagine a theory that utilizes different philosophical ideas and which therefore would be more compatible with feminist values.

And part 2, which is “an agenda for theory,” which leaves me a bit puzzled, since the agenda of all such enterprises (“smash the patriarchy!”) is pretty simple isn’t it? Who needs more theory? . . . 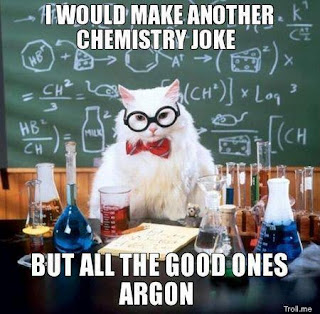 PDFs of the papers themselves can be found for free, here and here. I skipped around through the first, looking for something that made sense, aside from the initial introduction to ideal gas law and its modifications, without finding any. Powerline does offer one shred of hope however:


Now, I am wondering if Prof. Kovacs is engaged in one very long-running Sokal-style hoax, for the first installment in this series actually contains a lot of math about the “perfect gas equation,” culminating with some suggested new equations that would be more compatible with feminism, one supposes, though someone more current in math and chemistry would have to tell me.

I don't even see that much. As a student of physical chemistry back in grad school, what I see is a simple rewording of the text books, followed by some bullshit and gibberish. Somebody in Hungary paid for it, though.
Posted by Fritz at 1:45 PM