Eventually the morning always comes when the list of accumulate Obamacare Schadenfreudes become longer than the list of Hillary's issues. That morning has come.

From the New York Times: Obamacare not really turning out as promised, Ace has a slightly stronger Analysis: Obamacare Collapsing Like Hillary Navigating A Flight of Stairs - Rumors of the death of the Obamcare Death Spiral were premature.

The fundamental problem is simple: Insurers are losing money. Earlier this year, Aetna said it expected to lose about $300 million on the plans. UnitedHealth estimated losses on exchange plans in the range of $650 million. This is not a problem that is limited to big, profit-seeking insurance companies: The majority of the non-profit co-op plans created under the law have failed, citing an inability to pay claims using premium revenues.

Oh, don't be silly. That's why God created illegal, unauthorized-by-Congress executive slush funds, to pay taxpayer monies without legal authority to your buddies in the insurance industry. Obama's got a pen and a phone and a Messiah complex and no real checks on his power. 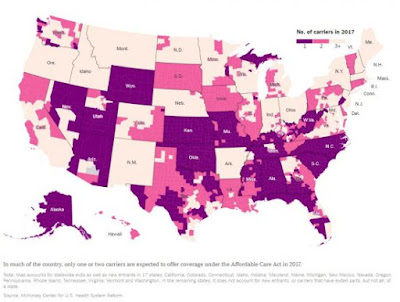 And the surviving Exchanges are seeking incredible rate increases.   Coming to an ObamaCare market near you: fewer plans, higher costs. And fewer jobs. 21% of New York manufacturing companies hiring fewer workers because of Obamacare. But that's OK because the unemployed get Medicaid, right? Broken eggs, omelettes and all. Think Your Obamacare Plan Will Be Like Employer Coverage? Think Again It will be more like Medicaid with high deductibles.


Hillary Clinton is telling voters she wants "to build on" Obamacare. But President Obama's signature healthcare law remains highly unpopular because many Americans believe it's not a good deal for them personally.

The president essentially laid out a case for his own law's failures in an article he wrote for the Journal of the American Medical Association.

He wrote: "too many Americans still strain to pay for their physician visits and prescriptions, cover their deductibles, or pay their monthly insurance bills; struggle to navigate a complex, sometimes bewildering system; and remain uninsured."

It was a striking concession. It also shows that the president still has no idea how much damage he's done to Americans' healthcare. . .

But, get this, Obamacare is collapsing before our eyes, but the Democrats don't care.

It now seems indisputable that Republican critics of the ACA were right. So are Democrats despondent about the acts’s failure? It doesn’t seem so.


Sabrina Corlette, an expert on the health law at Georgetown University, said the law is not in danger of melting down because of the way it is structured. She cited the financial subsides that the law gives lower-income people to pay for coverage.
“Because of critical things like premium subsidies and the individual mandate, this is not a market that is going to crash and burn anytime soon,” she said.
But a thriving market for ObamaCare plans is not the same thing as a subsidized market for the poor and sick. Democrats had promised the former when pushing the healthcare law, not the latter.

If all we wanted to do was buy subsidized health insurance for a relatively small number of people not already covered by Medicaid, it could have been done at a fraction of the cost of Obamacare.

This Is Rich – Democrats Blame Health Insurer For Destruction Caused By Obamacare. Remember, Obamacare passed on a party line vote with no margin after Sen Al Franken was elected with fraudulent votes, and legislative shenanigans by Harry Reid. They could have passed anything they wanted that way, but they chose to pass this instead.


Over the past 6 weeks The News Dump and Ace himself have been covering the failure of the Obamacare Exchanges. The failures are in the double digits. The surviving Exchanges are seeking incredible rate increases. So what is the next step? Surely "our betters" in D.C. will not repeal it. So what does that leave? Single Payer? Oh boy, this should work out well The U.K. has single payer. So it's surgery you have to wait for, surely you won't have to wait for basic prescription medications?

When people point out that Single Payer is the answer refer them to the U.K.'s system and their failures.

Perhaps we should fault the American Health Insurance Industry for getting into bed with Obama. They jumped on board the Obamacare train with $$$$$ signs in their eyes. My sympathy meter for Aetna among others is broken.

Hillary Clinton Pushed From Left and Right on Health Care: Liberals call for a government-run option; conservatives argue health law should be scrapped. And that brings us around to single payer: Bernie Sanders: My single-payer plan will solve Obamacare’s problems, and is gently rebuted by the mostly sensible Megan McArdle who claims Colorado's Single-Payer Health Care Would Die a Fiery Death


However, the death of Vermont’s single-payer proposal does not mean that the dream of a state-level system also died. Colorado now has a proposed plan, Amendment 69, which would create a similar system, funded both by taxes and by transferring money out of various federal programs and into the coffers of ColoradoCare.

Supporters of the new plan are pretty excited about some polls that have seemed to show support. I’m pretty skeptical, for the same reason I was pretty skeptical about the Vermont program: the cost. Building this new entitlement would cost more than 140 percent of the total current state budget. Since there are no plans that I’m aware of for the Colorado state government to stop doing all its other functions, that means that everyone in Colorado would have to take whatever check they are currently sending to their state government, tear it up, multiply the total by 2.4, and write a new check. It’s a bold political project. I’m not sure, however, that it is a winning one.

and again with: Obamacare's Public Option Is No Longer Defensible


In short, while a public option might appear to fix one problem, that's a mirage: The "problem" it would fix does not exist, and worse yet, it would create new problems.

Health care regulation often has this problem, which is why much-heralded reforms so often fail to live up to their promise. Keeping costs down turns into a giant game of whack-a-mole: You knock them down in one area, and they just show up somewhere else. Or they show up as politically toxic shortages that have to be fixed by … spending more money.

There are two unavoidable realities of making the American health-care system less costly: Americans must use less care, and our nation’s legion of well-paying, stable jobs in the health-care sector need to be both less numerous and less well paid. What no one can figure out is how to generate the political will to make this happen. The public option doesn’t fix that political problem.

The public option was best sold as a way to keep insurers from taking excess profits off of a customer base that was required to buy their product. But as it turns out, that’s the exact opposite of the problem we actually have. Which makes it a little mystifying that the public option is still seen as the solution. Somehow in supporters' minds, it has become a harmless homeopathic remedy that will cure any disease that ails you. In medicine, when we see such claims, most of us know that we’re looking at a useless quack nostrum. In policy, we should be similarly skeptical of miracle cures.