Plenty of Smoke at Clinton.com

Hillary Clinton on foundation: ‘I know there’s a lot of smoke but there’s no fire’


Hillary Clinton is pushing back on a report this week that she took many meetings with Clinton Foundation donors as secretary of state, saying there’s “a lot of smoke” but “no fire.”

“My work as secretary of state was not influenced by any outside forces,” Mrs. Clinton said in a telephone interview with CNN Wednesday evening. “I made policy decisions based on what I thought was right - to keep Americans safe and protect U.S. interests abroad.”

Republican presidential nominee Donald Trump has seized on an Associated Press report this week that said more than half of a set of 154 people from private interests who met or had scheduled calls with Mrs. Clinton while she was at the State Department also gave to the Clinton Foundation or pledged commitments to its international programs.

But she promised us no smoke: Remember when Hillary promised there wouldn’t be any ‘smoke’ let alone ‘fire’ with the Clinton Foundation?


Here is part of her sworn testimony during her confirmation hearings:


“My husband doesn’t take a salary. He has no financial interests in any of this. I don’t take a salary. I have no financial interests. So out of that abundance of caution and a desire to avoid even the appearance, the president-elect’s transition team began working with the foundation to try to craft an agreement that would avoid the appearance of a conflict but would also ensure that the foundation can continue its work.”


“However, the foundation and the president-elect decided to go beyond what the law and the ethics rules call for to address even the appearance of conflict and that is why they signed a memorandum of understanding, which outlines the voluntary steps that the foundation is taking to address potential concerns that might come up down the road.”

The Observer observes (nope, not yet) The Clinton Foundation’s Global Bribery and Crony Access Scam is a national disgrace. Hillary Lied, Withheld Evidence, Traded Power for Money, and Could Be President: Have Americans buried their moral compass and settled for “transactional politics?” Probably. More walk back from their "promise" to change Clinton Foundation: We’re keeping Chelsea, and probably foreign-gov’t donations too. What's the point if it doesn't enrich the Clintons? More Emails to Come Showing Hillary Clinton’s ‘State Dept. Doing Favors for Foreign Oligarchs’. 1/3 OF Abedin Emails EMAILS 100% Redacted: Information on Clinton server too sensitive even for Congress. Those must be pretty hot yoga routines. Hillary Clinton KNEW her aides were working with family foundation despite her pledge not to – and she even hosted dinner at her home for the charity when in office. Court orders State to hand over new Clinton emails by Sept. 13. But did he specify which year?

Scarborough to Hillary spox: “Go back to middle school”


Over the last few days, Hillary Clinton apologists have taken to the airwaves and Internet to declare any criticism of the Clinton Foundation as an attack on charity itself. James Carville launched these talking points, suggesting that critics would find themselves damned to Hell if the foundation shut down or curtailed its activities. Morning Joe host Joe Scarborough punctured Carville’s trial balloon earlier this week with barely-disguised disgust.

After watching a clip of Hillary Clinton spokesman Brian Fallon trot out the same argument on Andrea Mitchell’s show yesterday, Scarborough and Mika Brzezinski didn’t even bother with the disguise, calling the argument “pathetic” (via The Hill):


Speaking of emails, and segueing to the Clinton Health Watch, Oh Boy: Emails Reveal That Top Hillary Aide Researched Drug Used to Combat Parkinson's and Alzheimer's, Then Passed Information on to Hillary. Kind of like when she asked the NFL about concussions. Hmm. So what happened to Dr. Drew a few days after he expressed concern over Hillary's health and fitness? HLN Shows ‘Dr. Drew’ Out After Unveiling Ashleigh Banfield Plans. Just coincidence, I'm sure. Alex Jones (Infowars) claims that the "pickle stunt" was staged because there was no audible "pop" when Clinton opened the jar. At least the video is mildly amusing.

The big deal of the day, was, of course, Hillary Delivering Speech  and Starting an Ad Cpmpaign Connecting Donald Trump to "Alt-Right;" Releases Ad Connecting Him to the KKK, citing KKK support for deporting illegal aliens and Trumps preemptive strike, calling Hillary a "bigot":


"Hillary Clinton is a bigot who sees people of color only as votes, not as human beings worthy of a better future," Trump said at a campaign rally here, speaking to an overwhelmingly white audience of supporters in the deep-red state. "She doesn't care what her policies have done to your communities. She has no remorse. She's going to do nothing for Hispanics and African-Americans."

Never mind that the head of the Communist Party of the USA endorses Hillary, and the Communists have killed more people world wide than any other political movement.  Hillary went on to lash out at ‘Radical Fringe’ Taking Over G.O.P. Under Donald Trump. Concern trolling for the Republicans, how sweet! Citing the hiring of a Breitbart editor, she went after the "alt right" which she claimed was the new name for racism, and named the above mentioned Alex Jones as an example. Jones, for his part, strongly reject the accusations. This may have linited potenitial as an attack because Hillary Clinton Supporters at ‘Alt-Right’ Speech Don’t Know What It Is. They just know they want to hate it. 6 Things You Need To Know About Hillary's Speech Slamming The Alt-Right:

3. Hillary’s Deeply Hypocritical In Suddenly Singing The Praises of Conservative Figures.
4. Hillary’s Own Associations With Racism Are Disgusting.
5. Democrats Have Cried Wolf On Racism So Often That This Won’t Help Them Much.
6. Hillary Is Awful At Everything.

In the midst of the speech ripping Trump for being out of touch racist, uber-white Hillary began quoting the poetry of Maya Angelou. She also quoted a Mexican proverb. The crowd was clearly waiting for her to break out a bottle of her fabled hot sauce. Hillary has all the authenticity of a Pete Rose toupee. And when she claims that young people across America are suddenly bullying one another because of Trumpism, that rings hollow and false.

Insty: IF TRUMP IS SUCH A HORRIBLE RACIST, WHY DID HILLARY ATTEND HIS WEDDING? OH, RIGHT, SHE WAS PAID TO. Clinton links Trump to racists, declares him unfit for office. Standing up to racism boldly — unless someone offers you money! 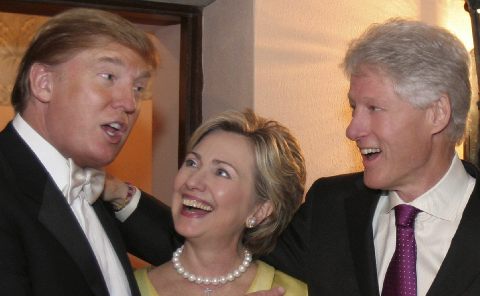 Another observation by the Observer: Hillary’s Secret Kremlin Connection Is Quickly Unraveling
Exactly how Clinton profited off deals with Skolkovo is something the American public has a right to know before November 8


As part of the reset, Hillary encouraged and enabled American and European investment in Russia, particularly in high-tech firms. A key role was played by the Skolkovo Innovation Center, a sprawling complex in Moscow’s western suburbs that was established in 2009 as Russia’s answer to Silicon Valley. With encouragement from the State Department, American companies jumped aboard. Cisco pledged $1 billion of investment in Skolkovo in 2010, and Google and Intel quickly joined the bandwagon. All three “just happened” to be major investors in the Clinton Foundation too.

This was the consistent pattern. As Schweizer explained, “Of the 28 U.S., European and Russian companies that participated in Skolkovo, 17 of them were Clinton Foundation donors” or had hired former President Clinton to give speeches. How much money these Skolkovo benefactors gave to Clinton, Inc. cannot yet be determined, but Schweizer concluded that it’s somewhere between $6.5 million and $23.5 million, with the proviso that since the Clinton Foundation has yet to reveal all its donors, the true figure could be much higher.

Then there’s the matter of what Skolkovo actually is. In truth, it’s nothing like Silicon Valley except in outward appearance. It’s a fully state-driven enterprise—funded largely by the Kremlin and acting on its orders. It does the bidding of the Russian government, and President Putin has taken intense interest in his high-tech complex, understanding its value to the country’s defense and security sector.

Therefore, it’s no surprise that Western intelligence considers Skolkovo to be an extension of Russia’s military-industrial complex—and its intelligence services.

Rape can do that to you: Juanita Broaddrick fears for her life: ‘I don’t feel safe anymore’ Her continued living casts doubt on the Clinton Death List theory. Juanita Broaddrick Wants to Be Believed. I thought she had a right to. Oh yeah, Hillary removed that plea from her campaign website.

Why bother, they're already in the tank: Let them eat chocolate! Clinton dodges questions from 'cooperative' reporters by offering them free sweets (and it's been 264 days since her last real press conference) 265 now, but who's counting.
Posted by Fritz at 6:38 PM