Are these half of the long-lost deleted "personal" emails that Hillary's lawyers deleted from her secret unsercured basement email server using search terms such as "Clinton Foundation" "CGI", "donor" etc? FBI uncovers 14,900 more documents in Clinton email probe. Yoga routines and Chelsea's wedding plans? Nope. Entreaties from Clinton.com donors for special access for the Secretary of State: Take it away, Ace: You're A-Gonna Not Believe This, But It Could Be That the Purely Personal Emails Hillary Deleted Were Work-Related

Is graft considered "personal" because the benefit accrues the Clintons' account?

Judicial Watch reports on the heroic efforts Huma Abedin went to to get favors for people who donated bigly to the Clinton Foundation.

See Judicial Watch for the emails in question, and other cases of Huma Abedin's Quick Fixer operation.

I would be stunned, except that I was expecting it. . . Clinton’s Campaign Manager Defends Foreign Foundation Money. and, well, duh: Clinton's economic plans likely to boost her corporate donors, More than half the people outside the government who met with Hillary Clinton while she was secretary of state gave money — either personally or through companies or groups — to the Clinton Foundation. Well, of course, it was like a key to the back door.


Under the likely timetable, the soonest the new emails would be released is October. The State Department released the original emails in monthly installments over nearly a year, through February, though it missed several court-ordered deadlines as its staff and other agencies scrutinized the documents for classified information.

Expect the State Dept to put scanning these emails behind the back burner.

Fellow traveler Colin Powell Says Hillary Clinton's 'People Have Been Trying to Pin' Email Scandal on Him. Which requires time travel, since she was using the private unsecured basement server to handle classified data for a year before she allegedly talked to him about it. He also specifically told her not to use it for classified data. Oooops! Too late. Did Hillary lie when she told the FBI about Powell's advice, or was she just a forgetful incompetent old lady? Clinton’s pathetic ‘Colin Powell made me do it’ defense


Clinton has been desperate for the moral cover of Colin Powell for her email arrangement since the scandal first broke last year. Now we’ve learned that Clinton told the FBI that Powell advised her to use private email as secretary of state at a dinner in 2009. This escalates Clinton’s email defense from, “Hey, Colin Powell did it, too,” all the way to, “Colin Powell made me do it.”

The Powell defense has given Clinton shills something to say on TV, but doesn’t make much sense.

While the former general used a private email as secretary of state, it was at a time when the department didn’t have a robust email system of its own. And he obviously didn’t set up his own private server.

After Powell left State, the department’s rules steadily got stricter about using official email for State Department business and preserving email records — and Clinton blew through them all.

My bet is that Lynch/Comey give her the benefit of being stupid. Apparent Army Opsec Brief Lists Hillary Clinton, David Petraeus As Examples Of Insider Security Threats. Loose lips emails sink ships embassies.

Trump: Appoint special prosecutor over e-mail scandal. Probably a safe call since the Obama Justice Department has no intention of allowing it.


A journalism major at George Washington University, Abedin, 40, was listed as “assistant editor” of the journal from 1996 to 2008, when her name was removed from the staff box and she went to work for Clinton at the State Department.

Her brother, who was an associate editor, and a sister, also employed as an assistant editor, are listed as staff members.

If she'd held onto the post past 2008, she would have been a quadruple dipper, State Dept., Clinton Foundation, Holdings, and the Muslim Brotherhood. 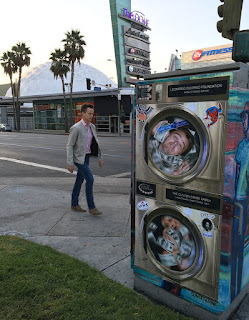 Remember that 'Republican Woman for Clinton'? She's a healthcare lobbyist married to a Clinton operative - This happens way too often.

Clinton campaign manager: Trump may be a Kremlin 'puppet' McCarthyism?

Well, she'll never be too thin either: Clinton camp sends out desperate plea for more funds

If You Only Read The New York Times And Washington Post, You Have No Idea The Soros Leak Happened, Partisan  information management.

American journalism is collapsing before our eyes It's been an empty shell for years.
Posted by Fritz at 5:35 PM