The FBI successfully recovered nearly 15,000 emails previously deleted from Hillary Clinton's private server, and we now know that at least 30 of those emails discussed the 2012 terrorist attack in Benghazi, Libya.

These newly discovered Benghazi emails will add fuel to the fire surrounding Clinton's decision to use a private email server while she was Secretary of State and could raise further questions about whether she fully cooperated with an investigation into the attack that killed four American diplomats in Libya on September 11, 2012.

So 30 about Benghazi. How many more were other State Dept. records?

I was pretty sure the FBI would recover a lot of emails from the Clinton.com servers, and I was pretty sure it would turn out that many of them had to do with State Dept. business, and even Benghazi. I'm also fairly sure that many more will turn out to be Clinton.com business, vaguely worded emails to avoid explicit quid pro quo while amassing as big a fortune as possible selling influence. And very few about yoga routines. Does she look like a woman who does yoga?

Of course she lied about turning over all her work related emails. No one thought any differently. But I'll bet the FBI will not see that as a lie to them, which is all that counts, apparently. Did she, in fact, tell the FBI that the servers might contain State Dept. business that was swept up and deleted using the search terms that her lawyers used to decide what to purge? That would be my guess.

October surprise? The State Department's lawyer said it would need until the end of September to review the emails and redact potentially classified information before they are released.


How badly will this damage Hillary? Well, don’t get your hopes too high. The corruption issues between the Clinton Foundation and the State Department should have already forced her out of the race, and yet … here we are. Anything less than an e-mail from Hillary that explicitly describes a cover-up attempt is not likely to derail her candidacy, and it may be that these 30 e-mails are ancillary to the investigation. That doesn’t seem likely either — if they were ancillary, why not turn them over with everything else? — but until we see them, we won’t know.

What I want to see it the edit trail in "mark changes." FBI to release report on Hillary Clinton email investigation:


The FBI expects to publicly release in the coming days the report the bureau sent to the Justice Department in July recommending no charges in the Hillary Clinton email server investigation, according to multiple law enforcement officials. The release is in response to numerous FOIA requests including from CNN.

Also to be released is Hillary Clinton's 302, the FBI agent notes from Clinton's voluntary interview at FBI headquarters. The report is about 30 pages, and the 302 is about a dozen pages according to the officials.


Don’t expect too much out of the document dump. Members of Congress, including House Oversight chair Jason Chaffetz (R-UT), complained about the amount of redactions in the files they accessed in the FBI’s cooperation with Capitol Hill. Chaffetz argued that the heavy black ink in the files demonstrated that Hillary lied about exposing sensitive information, and raises questions about why the FBI decided to punt on recommending prosecution. . .

On May 28, 2013, months after stepping down as secretary of state, Clinton sent an email to a group of diplomats and top aides about the “123 Deal” with the United Arab Emirates.

But the email, which was obtained by the Republican National Committee through a Freedom of Information Act request, was heavily redacted upon its release by the State Department because it contains classified information.

The email from Clinton was sent from the email account — hrod17@clintonemail.com — associated with her private email server.

Sure; SecState is not a job one steps away from instantly.

The liberals at the Hill see problems with Clinton.com: Foundation headaches mount for Clintons, Even the NY Times: NYT to Hillary: Respond to an “ethical imperative” now, not later

When Bill Clinton told the staff of his global charity he would have to step down if Hillary Clinton won the White House, he was vividly clear about how that felt: Worse than a root canal, he said.
For Clinton, the foundation that bears his name has shaped much of his post-White House legacy, helping transform him from a popular yet scandal-tainted former president into an international philanthropist and humanitarian.

The Clinton Foundation’s charitable works amounted to just “15% of its revenues while Hillary Clinton was Secretary of State, and just 6.4% in the first year after it.” In 2013 he Foundation spent as much on travel for its executives and staff as it did on charitable grants.

It’s easy to see why giving that up would be painful, but it isn’t as though being First Spouse doesn’t come with perks of its own.

On the Abedin/Weiner lack of affair: Huma Abedin distractions hinder Clinton campaign, provide opening for Trump; Huma Abedin does What Hillary Never Could, throw the bum out. Texts reveal Anthony Weiner knew his marriage was ‘busted’, she loved Hillary more. The Huma-Weiner Scandal Is More Than Just Casual 'Sext'. Did he want out, and was getting caught his way to make it happen? Insty shouts: WHAT KIND OF TRAGEDY WAS ANTHONY WEINER?, asks Dave Weigel of the Washington Post.


To be fair, not everybody can bounce back from their mistakes and public dissembling as effortlessly as Dave Weigel of theWashington Post.

Exit quote: “The second question is whether Weiner had a skill set that New York, or the country, missed out on when he fell. That’s harder to answer.” No it’s not. 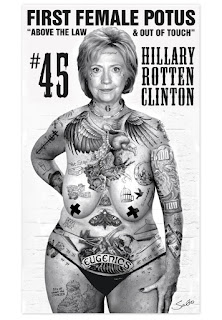 Also from Insty:  WELL, THAT DIDN’T TAKE LONG FOR AN ANSWER.


About 20 posters featuring an unflattering image of the Democratic nominee for president were hung Monday morning in the area by Sabo, a conservative street artist known for creating fake ads and traffic signs and affixing them illegally to bus stops and light poles in the dead of night.
His latest work is largely an anti-abortion statement, though it touches on feminism and alleged scandals involving the Clinton Foundation. And, with the number “6-6-6” tattooed around her neck, the rendering insinuates she may be Satan, or at least a devil worshipper.
An image of Saul Alinsky, the writer of Rules for Radicals who was allegedly a mentor of Clinton’s, is tattooed on one arm and $100 bills are on the other. There’s also a skeletal fetus about to be cut by scissors, a wire hanger, a vulture and the slogan “no bras, no masters.” (See the images below; the black bars were added by The Hollywood Reporter.)

I love the “alleged” and “allegedly” – that’s ever-so adorable, THR. The queen must be protected!

Meanwhile, the Clinton plan for the US continues to emerge: Hillary Clinton’s economic agenda risks another recession, what's wrong with tax, regulate and demonize? Let Them Drink Lead: So whatever happened to Hillary’s primary season Flint Initiative? Not convenient, of course. Bill Clinton: Rebuild Detroit with Syrian Refugees. Do they think middle easterners are immune to lead?


HILLARY CLINTON HAS BEEN ‘FINDING HER VOICE’ SINCE 1993.

Not her socialist ideology, which has been largely fixed in place for most of her adult life, but how to best sell it. (Read: lie about it.)

Hillary's 'alt-right' smear will backfire. Kind of like the cowboy and the lesbian joke; I didn't know what they were, but now I am one. Clinton’s Alt-Right Kill-Shot and Trump’s ‘One-Way Man-Crush’ - It’s not every day you have two fabulously wealthy white senior citizens publicly yelling 'Racist!' at each other. One nice thing about Trump is he won't go into a gun fight unarmed.

Some humor from Infowars: SPECIAL REPORT: ALEX JONES ASKS HILLARY CLINTON NOT TO KILL HIM. They save the kiss of death for those they love. More from Stand United who proposes to dock Barack Obama's pay for the time he spends campaigning for Hillary. An amusing concept, but unlikely to happen.
Posted by Fritz at 10:42 AM